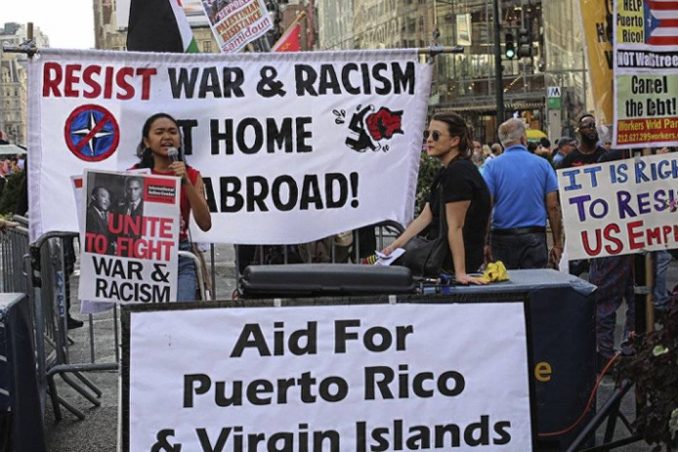 New York — Hundreds of antiwar militants gathered in busy midtown Manhattan on Oct. 11, the 16th anniversary of the U.S. invasion of Afghanistan, for a speak-out demanding an end to U.S. imperialism both at home and abroad.

A variety of speakers from different organizations blasted U.S. aggression around the world, from Newark, N.J., to Yemen, Puerto Rico and Palestine. The Saturday crowds at Herald Square gathered to learn about the struggle for unification in Korea, international solidarity with political prisoners and the connections between anti-imperialism and the uprisings against killer cops in Ferguson, Mo.

The rally was a step forward in linking the struggles against war abroad and oppression at home. Many activists focused on the slogan of “No to racism & white supremacy! Black Lives Matter!”

The devastation in Puerto Rico was on everyone’s mind and was reflected in the slogans: “We need massive relief for Puerto Rico & the Caribbean — not wars from Afghanistan to Korea!” A press release and joint statement demanded “Cancel the debt! Open the warehouses! Humanitarian relief — not military ­occupation!”