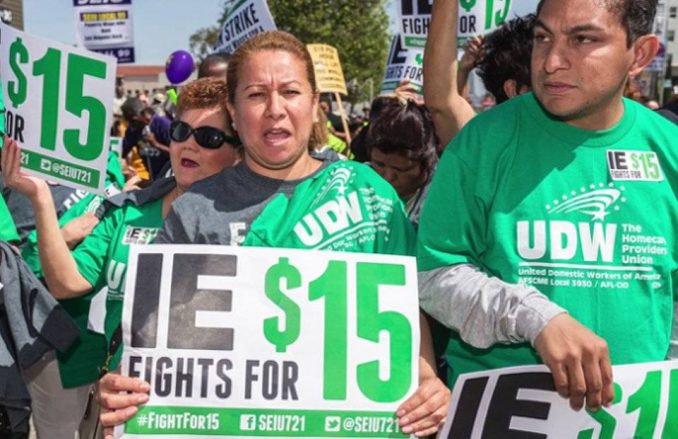 Seattle workers won a boost in the minimum wage three years ago, from $9.47 to $15 an hour for most workers at companies with 500 or more employees. This came as part of the movement that has led to minimum wage increases in dozens of cities across the country. Many are now earning the $15 per hour, with more to come, due to the national struggle.

Since July, however, a new study by University of Washington (UW) researchers has brought the opponents of a $15 minimum wage out of the woodwork. The study actually claims that low-wage workers were hurt by the higher wage! The study says the minimum wage increase caused bosses to reduce the hours of minimum wage workers by 9 percent — and that the new minimum wage only raised their wages by 3 percent. But how could this be?

This UW study has been grabbing headlines across the country.

Another study, however, this one by the University of California Labor Center, came out around the same time as the UW study. It points out that the UW study excludes workers at businesses that have more than one location. In other words, only stand-alone small companies show up in its results.

Workers at Starbucks, McDonalds and the other big chains aren’t included! The UC Labor Center says the UW report leaves “48 percent of Seattle’s low-paid workforce out of the study.” Workers at small companies are also covered by the new minimum wage law, but their raise to $15 an hour is more gradual.

There’s another problem with the UW “study.” Its lead researcher, Jacob Vigdor, is an opponent of the minimum wage who wrote in a post in 2014: “The minimum wage is a lousy anti-poverty program.”

Seattle’s unemployment rate is now 2.6 percent. Big business opponents of minimum wage increases had long warned it would result in restaurant closings, layoffs and other significant problems. None of these outcomes have come to pass, as the bosses scramble to come up with ­“alternative facts. “