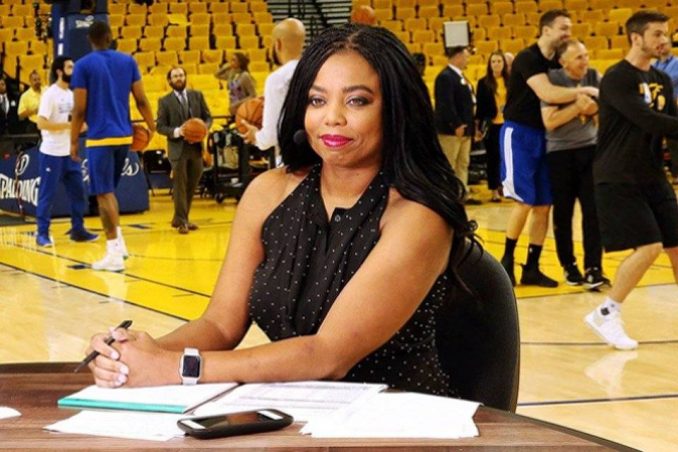 Bulletin: Jemele Hill, the African-American ESPN Sports Center reporter who rightfully labeled Donald Trump a white supremacist on Sept. 11, has been suspended for two weeks for a “second violation of our social media guidelines,” according to espn.com on Oct. 9. The suspension occurred after Hill asked Dallas Cowboys fans to boycott the team’s advertisers in lieu of Cowboys owner Jerry Jones’s threat to bench and even fire players if they protest during the anthem.  In response to her suspension, Hill posted on Twitter: “Just so we’re clear: I’m not advocating a NFL boycott. But an unfair burden has been put on players in Dallas & Miami w/ anthem directives.”

Oct. 8 — Prior to the kickoff of week five of the National Football League season, the billionaire team owners, including notorious Dallas Cowboys owner Jerry Jones, threw down the political gauntlet by issuing an ultimatum to players who sit or kneel during the national anthem: stand or risk not playing or being fired.

These are the same owners who locked arms with players in a phony public display of solidarity on Sept. 24 in response to Donald Trump’s calling protesting players “SOBs” two days before.

Vice President Mike Pence left in protest prior to the Oct. 8 game between the San Francisco 49ers and the Indianapolis Colts, after witnessing over 20 San Francisco players take a knee during the national anthem. Many saw Pence’s brief appearance as a publicity stunt by him and Trump to try to change the narrative of the protests.

Pence stated on his Twitter feed: “@POTUS [Donald Trump] and I will not dignify any event that disrespects our soldiers, our Flag, or our National Anthem.” It is no surprise that Pence and Trump were silent when neo-Nazi terrorists rallied in front of the Robert E. Lee statue in Charlottesville, Va., on Oct. 7.

The 49ers are former teammates of Black quarterback Colin Kaepernick, who ignited a sportswide protest in 2016 against police brutality by taking a knee during the anthem.

Kaepernick, a free agent, has not been signed by another team since the end of the 2016 season, even though he has let it be known that he is ready to play.

Eric Reid, a 49ers safety who has protested alongside Kaepernick since last season, responded to Pence’s tweet: “This is what systemic oppression looks like. A man with power comes to the game, tweets a couple of things out and leaves the game with an attempt to thwart our efforts.” (politico.com, Oct. 8)

Terrelle Pryor, a Washington receiver, was called the N-word by a white Kansas City fan after an Oct. 2 game. He responded that what happened to him is “the exact reason why guys are kneeling during the anthem.”

These NFL players and others have made clear that they will not remain silent about institutionalized racial inequality. This fundamental issue is reflected in the owners’ attempt to place their quest for profits above the fight for racial equality.

These players have evolved as integral components of the overall Black Lives Matter movement.  That movement began as a Twitter hashtag by three Black women activists, including one transwoman, following the vigilante murder of 17-year-old Black youth Trayvon Martin in 2012.

In the midst of this political backdrop, the Federal Bureau of Investigation issued a report, released by foreignpolicy.com on Oct. 6, dubbing the BLM movement a “terrorist threat.”

The report states in part: “The FBI assesses it is very likely Black Identity Extremist (BIE) perceptions of police brutality against African Americans spurred an increase in premeditated, retaliatory lethal violence against law enforcement and will very likely serve as justification for such violence.”

This report harkens back to the days when this same FBI, run by J. Edgar Hoover, targeted Black Liberation groups like the Black Panther Party for extinction with its Counter Intelligence Program or COINTELPRO.

The report was released 11 days before the official opening of the 2017-18 National Basketball Association season. Star players such as Steph Curry, LeBron James and others have expressed solidarity with Kaepernick and the struggle that has caused him to be unemployed so far this season.

A day after his attack on NFL players, Sept. 23, Trump disinvited Curry’s team, the defending NBA champion Golden State Warriors, from visiting the White House this coming February.  He did so after Curry and other teammates stated that they weren’t interested in such a visit as long as Trump is in office. Unlike NFL players who are not contractually obligated to stand during the anthem, the opposite is true of NBA players.

In fact, NBA players are required to stand in a straight line on court during the anthem. J.R. Smith of the Cleveland Cavaliers recently stood a few steps behind this line during the anthem before a preseason game. So far, NBA Commissioner Adam Silver has not responded with a fine or warning.

Players in the Women’s National Basketball Association have actually taken a more progressive and visible stand against police violence than their NBA counterparts. However, due to the still-prevailing male dominance in U.S. sports, reflected in the huge gender-bias gap in salaries and TV revenue, WNBA protests have been given comparatively scant attention by the mainstream media.

The FBI report should be viewed as a ploy to weaken sectors of the multinational working class who identify with BLM, including Black athletes who refuse to be silenced by racism, Trump or team owners who view them as mere commodities.

Not only is this FBI report outrageous and bogus, but it comes at a crucial time in the BLM struggle. In addition to the growing number of outspoken athletes taking center stage, there have been ongoing shut-down actions by BLM activists. Most notable is the weeks-long uprising in St. Louis to protest the Sept. 15 racist acquittal of white cop Jason Stockley, who shot and killed a young Black man, Anthony Lamar Smith, in December 2011.

Clearly, the FBI along with NFL and NBA hierarchies, which represent the interests of the team owners, want these protests to go away. At the same time they don’t want to ignite more activism in either of these leagues, where 70 percent and 75 percent of the players are of African descent, respectively.

The FBI claims that the BLM movement has a “false perception” or an overblown view of police killings of people of color. What do statistics say about this “perception”? A Washington Post database states that since Oct. 8, 750 people have been shot and killed by the police so far in 2017, and that number is growing day by day. This particular database also shows that mental illness played a role in one out of every five killings.

The last U.S. census showed whites making up 63 percent of the general population and African Americans 13 percent. That’s almost five whites for every African American. But the 750 people killed by the cops this year include 335 whites and 168 African Americans. What this boils down to is that the police are killing Black people at more than twice the rate they kill whites.  Substantial numbers of Latinx, Asian and Indigenous peoples also have been killed by police this year, reflected in the 750 total.

According to newsweek.com, fewer than 30 cops have been shot and killed in 2017. (Aug. 7) Statistics don’t lie when it comes to showing the police carrying out a racist war against Black and Brown people and people with disabilities.

This FBI report is the latest attempt to divert attention from the war on the oppressed while white supremacist terrorists are being shielded under the guise of “free speech.”  The righteous anger that this report is creating, far from suppressing resistance to racism, will instead intensify resistance in the streets and on the playing field.