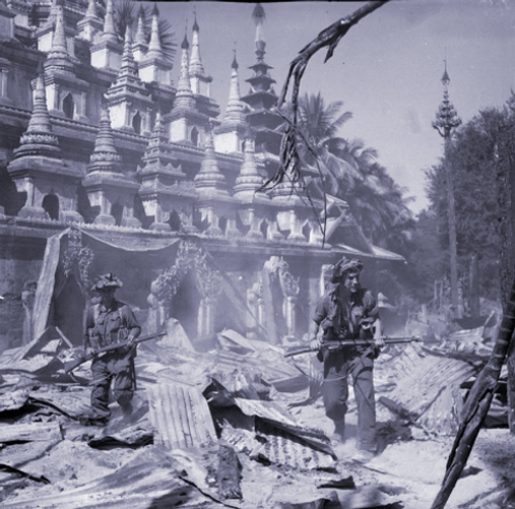 British colonial forces in Myanmar, known at the time as Burma.

Demonstrations, protests and online petitions have appeared worldwide to defend the struggle of the Rohingya people who have been driven from Myanmar into exile. What is of concern is that political forces with no history of or interest in defending the rights of these oppressed people, including the U.S. and Saudi regimes, have joined this effort.

U.S. government officials, including U.S. Ambassador to the U.N. Nikki Haley, Secretary of State Rex Tillerson and Vice President Mike Pence, have called for immediate action and delivery of humanitarian aid to the Rohingya.

Since Washington and Riyadh are inflicting a murderous war on millions of people in Yemen, not to mention in other parts of the world, working-class movements and anti-imperialist forces around the globe are asking what is behind their sudden concern for a small ethnic group in Southeast Asia. Could it have something to do with geopolitical maneuvering in Myanmar between China and the U.S.?

As a huge developing economy with central planning, significant state ownership and cash reserves, China is in a position to offer extensive infrastructure development. China’s One Belt One Road project and other economic plans are attracting great interest.

U.S. policy is increasingly geared toward disrupting these development plans with vastly expanded militarization and regional wars. This is the strategy behind the Pentagon’s “Pivot to Asia.” A Western network of nongovernmental organizations and Saudi-backed extremists are part of the disruption.

Myanmar and the Rohingya

Myanmar, earlier called Burma, is a formerly colonized, underdeveloped and extremely diverse nation of 51 million people. It has 135 distinct ethnic groups among its eight nationalities.

Myanmar is a resource-rich, strategically important country bordering China, Bangladesh, India, Thailand and Laos. It’s important to Wall Street banks and U.S. policy makers as a major exporter of natural gas, and there are plans to make it a conduit for oil.

Within Myanmar, the Rohingya people are an oppressed ethnic group of approximately 1 million people. A majority of Rohingya are Muslim, though they make up less than half of Myanmar’s Muslim population, which is scattered throughout the mostly Buddhist country.

The Rohingya are considered stateless. They live in the state of Rakhine, on the Bay of Bengal, and share a long border with Bangladesh.

The group carrying out armed resistance in Myanmar, known as Harakah al-Yaqin (HaY, Faith Movement in Arabic) and now called the Arakan Rohingya Salvation Army, is headquartered in Mecca, Saudi Arabia. Ataullah abu Ammar Junjuni, a Pakistani national who lived in Saudi Arabia, is the leader of ARSA. This group led a coordinated attack on 30 Myanmar military posts on Aug. 25.

The Myanmar military responded with a wave of repressive attacks on the Rohingya that drove tens of thousands of people over the border.

Meanwhile, the Saudi kingdom is carrying out a genocidal war on Yemen, enforcing a blockade of food and aid against the poorest country in Southwest Asia. This war is only possible using U.S.-made jet aircraft and bombs. The Saudi military cannot fly its own jet aircraft or carry out bombing runs without direct U.S. assistance and in-air refueling. In addition, the Pentagon is now carrying out at least one covert strike every two days in Yemen.

Yemen is caught in “the world’s largest hunger crisis,” which is “man-made” and is starving “an entire generation.” (Washington Post, May 19)  According to U.N. figures, more than 7 million Yemenis are close to famine.

The World Health Organization has warned of “the worst cholera outbreak in the world” in Yemen. (CNN, Oct. 4) The U.N. counted 777,229 cholera cases as of Oct. 2, many of them in children.

Saudi bombing of sanitation and sewage infrastructure in this impoverished country is a major cause of the deadly epidemic. Yet this desperate crisis was not on the U.N.’s agenda, and is barely mentioned in the media as world leaders met in New York in September. The media focus was on Trump’s talk of aiding the Rohingya.

Remember that the U.S. military is engaged in bombing, drone attacks, targeted assassinations and starvation sanctions against at least eight Muslim countries on any given day: Syria, Libya, Yemen, Iraq, Afghanistan, Pakistan, Somalia and Sudan.

The Kingdom of Saudi Arabia provides no rights for any of the peoples living within its borders. Minority religious communities and millions of immigrant workers, even after living there for generations, are not counted as citizens. Its vast oil wealth is owned by one family: the House of Saud.

Saudi Arabia has played its reactionary role by funding extremist groups, often with the quiet support of the U.S., in Afghanistan, Syria and across the Middle East. Increasingly in South Asia, Saudi-influenced political and religious extremism is having an impact.

Saudi Arabia spends over $1 billion to fund 560 Wahhabi mosques and Islamic centers in Bangladesh, which borders  Myanmar. This means a new center of reaction in almost every village and town in Bangladesh. Similar funding has been long underway in India and Pakistan.

U.S. and Saudi support for the Muslim Rohingya is based on the U.S. declared “pivot to Asia.” For U.S. strategists, it is a way to block Chinese influence in a strategic region.

Eighty percent of China’s needed oil and much of its trade passes through the Malacca Straits — a narrow choke-point between Indonesia and Singapore — and into the increasingly tense South China Sea. U.S. aircraft carrier battle groups stationed there could easily blockade this movement of needed resources.

To counter U.S. aggressive moves, China’s development programs are aimed at diversifying and finding ways around a direct confrontation with U.S. military power.

China is building a deep-sea port, industrial park, and gas and oil pipelines at Kyauk Pyu in Myanmar on the Bay of Bengal. This would provide China with an alternative route for energy imports from the Middle East that avoids the Malacca Straits. The multibillion-dollar construction project is also enormously beneficial to Myanmar’s economy, aiding development of its gas fields. U.S. and Saudi intervention in the escalating Rahingya struggle threatens this development project.

There is no region in the developing world, whether in Asia, Africa or Latin America, where U.S. imperialism, in its present stage of decay, plans to assist desperately needed economic development. The U.S. economy is geared to super-profits through war, weapons sales and onerous debt. U.S. imperialism can only continue its domination by disrupting the development of any potential competitors or economic bloc of competitors.

By consciously supporting and inflaming both sides of a national struggle, the cynical Western imperialist powers are employing a longtime divide-and-rule tactic meant to dominate a whole region by becoming the outside arbiter.

U.S. imperialists have done this in many international crises. In Iraq, the U.S. built bases in the Kurdish region while claiming to support the unity of the Iraqi state. Playing on this division has strengthened the ruinous involvement of the Pentagon in the region.

In the Philippines a sudden insurgency of a minority Muslim population on the island of Mindanao has become the latest excuse for the U.S. to offer joint training and stationing of its troops there.

Pentagon plans for expanded intervention, coordinated with Saudi organization and funding, can be seen in this warning by the Center for Strategic and International Studies: “There is legitimate concern that the violence will attract outside forces. Now that thousands of battle-hardened, ISIS-affiliated foreign fighters are seeking new missions beyond a shrinking Islamic State in Syria and Iraq, new opportunities to defend Muslims will inevitably appeal to them.” (tinyurl.com/y8khtzns, Sept. 7)

All the countries of the region, including Bangladesh, Myanmar and China, have every interest in a peaceful reconciliation for the Rohingya people. The region needs coordinated development, not the enormous disruption of war.