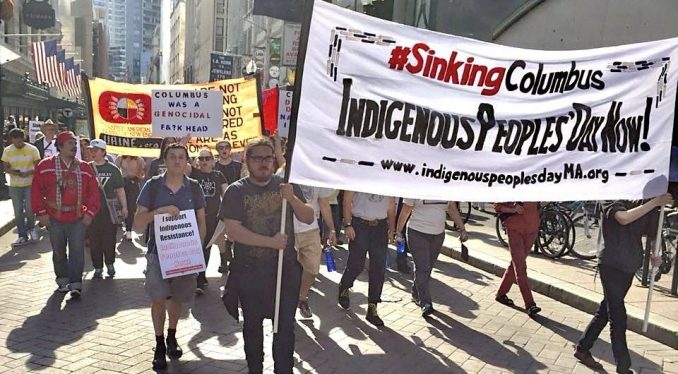 A fired-up crowd gathered outside Boston’s Park Street Station Oct. 7 to demand Indigenous Peoples Day be observed on the second Monday in October by Boston and other Massachusetts cities and towns. The group also decried practices in schools and workplaces that glorified Columbus with the annual holiday, parades and rehashing the myth of “the discovery of America” instead of exposing him as a genocidal slave trader and murderer.

Led by Indigenous people, the event was part of a coast-to-coast movement fighting to end Columbus Day and to build momentum for Indigenous Peoples Day.

The mobilization brought out participants and supporters from a broad range of local communities that have considerable first-hand experience dealing with the man-made catastrophes of colonialism and white supremacy.

Mahtowin Munro, of United American Indians of New England and lead organizer for Indigenous Peoples Day in Massachusetts, opened the rally by clarifying: “First, we are here to tell the truth about Columbus … who didn’t discover anything. He invaded! You can’t discover a place where people were already living!”

Alberto Barreto spoke on behalf of the Taino people of Borinquen (Puerto Rico) and its diaspora: “We are all relatives, Native people.” He reminded listeners, “And as relatives, we are creating a bloc of resistance — from Patagonia to Standing Rock to the Caribbean — to say no to Columbus and to celebrate our life, Indigenous life!”

Barreto continued, “Hundreds of years of colonialism have stifled the Puerto Rican economy … and the profits they have taken will never re-enter the island. Now, the white supremacist is throwing paper towels at us. So now is the time! I don’t want to see that statue of Christopher Columbus; I want him down!”

In addition to Black and Palestinian speakers, other Indigenous speakers were Narragansett, Wampanoag, Mi’kmaq, Mexica, and Tunica-Biloxi/Choctaw.

Nat Heathman, a young Narragansett Two-Spirit activist and member of Workers World Party, spoke about the isolation many generations of Indigenous people in the U.S. have faced growing up: “[F]eeling the sorrow, longing and anger born of catching a glimpse of such a vibrant, beautiful, fascinating, precious world, of everything that used to be and could have been, but knowing that it isn’t anymore.”

One way to heal from the pain of this isolation, Heathman suggested, is collective action to tear down racist statues and all of white supremacy.

After the inspiring rally, the group marched through Boston’s Downtown Crossing neighborhood. There it swelled to over 200 strong, stirring interest from tourists and passersby. Heathman and other young militants led the growing crowd in chanting, “Indigenous people say: No more Columbus Day!” and “This land is stolen land! Blood is on Columbus’ hands!”

The march arrived at Boston’s waterfront-area Columbus statue, privately owned and maintained by the “Sons of Italy,” a U.S.-based Italian fraternal organization widely criticized over its reverence for fascist dictator Benito Mussolini.

As the crowd chanted, “The statue, let’s face it, this shit is fucking racist!” Heathman ascended the base of the statue and “decorated” it with placards reading, “Christopher Columbus was a genocidal slave trader — #TearDownWhiteSupremacy” and “Columbus: time to bring him down.”

Finally, a rally concluded the day with several additional speakers, including local labor activists who voiced support for the demand to replace Columbus Day with indigenous Peoples’ Day.

“It’s not just about getting a day off,” Childs told Workers World. “It’s about who is celebrated and who is put to the side. Why do some workers get a day off to glorify white supremacy and not a day for solidarity with oppressed people?”

Led by Indigenous people, the crowd then turned toward the Boston Harbor and together honored the powerful ocean beyond it, acknowledging the crucial role of Indigenous people in safeguarding the water and the earth.