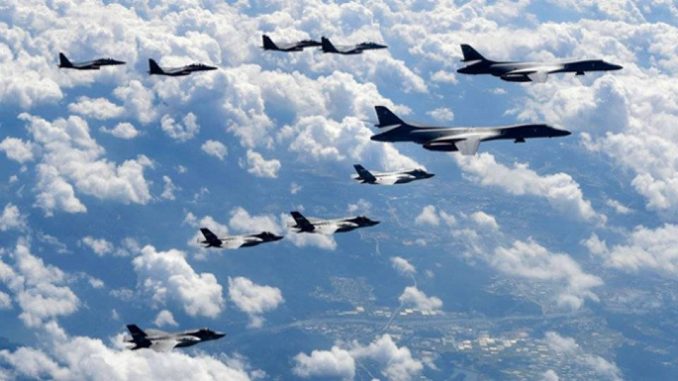 To borrow a phrase from LeBron James, “U Bum!” would be an appropriate response to Donald Trump’s latest round of threats and racist insults hurled at the leader of the Democratic People’s Republic of Korea.

Kim Jong Un was being relatively restrained when he called Trump’s behavior “mentally deranged.” He was responding to the U.S. president’s Sept. 19 speech to the United Nations General Assembly, which drew gasps of disbelief from the assembled diplomats when Trump threatened to “totally destroy North Korea.”

Has this sunk in with the people of the U.S.? That the person who supposedly has his hand on the nuclear button is talking like a 1920s Chicago mobster, crudely threatening war with a country that now has nuclear weapons to defend itself?

The problem is not just Trump, of course. The Pentagon says that on Sept. 23, U.S. B-1B bombers and F-15C fighters flew along the coast of the DPRK above the demilitarized zone for the first time. And the U.S. government has imposed a new round of sanctions on the DPRK meant to paralyze its economy.

None of this will deter the DPRK from developing the means to defend itself from a U.S. attack. In fact, just the opposite — Trump has confirmed that the Koreans can expect nothing but further hostility from the U.S. ruling class and therefore they must strengthen their country’s defense by any means necessary.

The foreign minister of the DPRK, Ri Yong Ho, answered Trump in a speech to the U.N. General Assembly on Sept. 23, the same day that U.S. warplanes were flying along the coast of his country. Ri told the assembly:

“The most rampant violation of international justice can be seen on the Korean peninsula.

“Unprecedented acts of injustice such as imposing harsh sanctions on a victim for the reason that the victim chose to stand up to the offender are openly committed in the name of the U.N.

“The essence of the situation on the Korean peninsula is a confrontation between the DPRK and the U.S., where the former tries to defend its national dignity and sovereignty against the latter’s hostile policy and nuclear threats.

“The U.S. started large-scale joint military exercises against the DPRK during the Cold War period and further increased their scope and aggressive nature after the Cold War, staging the exercises several times a year by mobilizing more of nuclear strategic assets.

“What else could be a bigger threat than the violent remarks such as pouring ‘fire and fury,’ ‘total destruction’ coming from the top authority of the world’s biggest nuclear power?

“The very reason the DPRK had to possess nuclear weapons is because of the U.S. and it had to strengthen and develop its nuclear force onto the current level to cope with the U.S.”

Trump expresses in the crudest terms the miscalculations of an imperialist power that once had a monopoly on nuclear weapons. It was unthinkable to his class of billionaires that a small country like the DPRK could recover from the total destruction wrought by the U.S. war of 1950-1953, rebuild its economy and become a nuclear power.

It tries to explain the DPRK’s astounding progress by calling its leaders “dictators” and its people “robots” who have been forced to do their bidding. In fact, the DPRK’s spectacular development has been made possible by the tremendous enthusiasm of its workers, farmers and intellectuals for building an independent socialist society free from colonial and imperialist oppression.

The DPRK has been able to marshal its resources because of this. So many countries that have suffered under colonialism and then imperialism cannot provide the bare essentials of life for the people because their economies continue to be looted by the rich capitalist powers.

Despite blockades, sanctions and war threats, the DPRK has achieved a high level of technological development — and its development of a nuclear deterrent is a testament to this. The Korean system of free education has produced experts in all the sciences. They have a strong spirit of self-reliance and their nuclear achievements are a source of great pride.

The U.S. has never apologized for annihilating two Japanese cities with atomic bombs. If it can claim it was justified in actually using such horrendous bombs in August 1945, when Germany had already surrendered on May 7 and the world war was clearly coming to an end, how can it in any honesty excoriate the DPRK for developing such weapons to defend itself?

No wonder the people of the DPRK are now elated that their scientists have achieved success in producing nuclear weapons and the missiles that can deliver them. It should lift from their shoulders the terrible possibility that they could be attacked at any time by the world’s most fearsome military power. The ball is now in the court of the people of the U.S., who must struggle — in our own interests as well as those of the Korean people — to make sure that never happens.