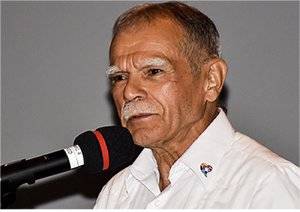 Philadelphia — “Colonialism is a crime against humanity.” These words, from Puerto Rican freedom fighter Oscar López Rivera, ring even truer in the aftermath of Irma and Maria. These hurricanes tore through and left behind vast destruction on Caribbean islands that continue to be ravaged by colonialism and imperialism.

López Rivera was speaking on Sept. 18 to a diverse crowd of over 200 people at Taller Puertorriqueño, a community and cultural center in North Philadelphia. He was the honored guest of the National Boricua Human Rights Network. When the former political prisoner entered the room, the crowd stood, erupting into cheers and began chanting, “Se siente, se siente, Oscar esta presente!”

A message was delivered from prisoners at Graterford Prison in Pennsylvania who wished to show appreciation to López Rivera. They told him that his example as a freedom fighter for the independence of Puerto Rico encourages their own struggles for liberation from the oppressive prison system.

López Rivera called for all political prisoners to be free. He also focused on  the youth in the movement, calling them the future who will carry on the work we do now. He urged the young people in the crowd, “Dare to struggle, dare to win.”

Finally, López Rivera spoke about the effects of colonialism on Puerto Rico.  As one of many colonies still existing in the 21st century, the island is being economically strangled by the United States. He noted that the debt crisis on the island is the direct result of colonialist exploitation by the U.S. government and the collaboration of the Puerto Rican government.

Repayment of the debt is being imposed on the Puerto Rican people, who have already seen 179 schools closed, pensions taken away and health care benefits cut.

Now, as the island is struggling with a total power outage and massive problems brought on by the hurricanes, the U.S. offers no support. This neglect is consistent with the long history of U.S. firms stealing resources from Puerto Rico and leaving the Puerto Rican working people to suffer.

This is why López Rivera called for decolonization, sovereignty and independence of Puerto Rico as the only way to end the abusive colonial relationship.

Puerto Rico’s colonial government is doing little, so the people are doing it themselves. They are showing the realistic possibility of life without this imperialist, colonialist government that has bankrupted the island and loaded enormous debts onto the people.

In cheering for López Rivera, the audience was supporting self-determination and liberation for the Puerto Rican people!