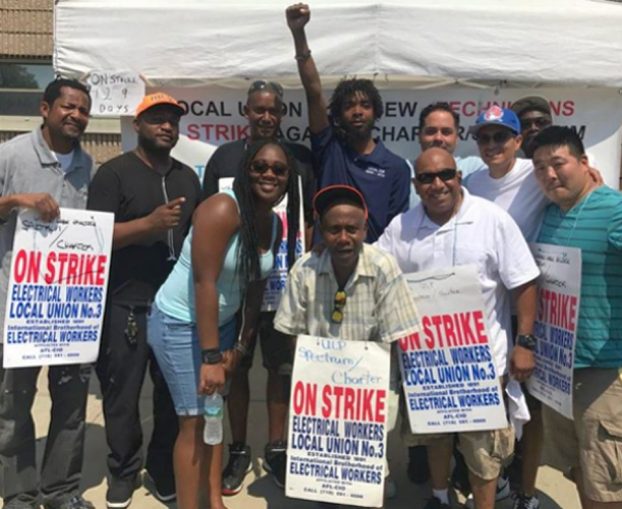 Over 1,800 Charter/Spectrum workers have been on strike in New York and New Jersey for nearly six months since March 28. They are fighting for a livable contract and against corporate greed, unfair labor practices and union busting. While Charter/Spectrum wants the workers to take a cut in benefits with no raise in pensions, Charter Communications’ CEO received a total compensation of $98 million in 2016.

No wonder the members of International Electronic Workers (IBEW) Local 3 are marching west across the Brooklyn Bridge on Sept. 18 for a 4 p.m. rally in Foley Square. The New York City Central Labor Council has called out its members; for the first time AFL-CIO President Richard Trumka will join them.

Besides maintaining picket lines at Spectrum stores throughout the region, the union has used imaginative tactics to expose Spectrum’s unwillingness to offer them a contract they can live with. They marched across the George Washington Bridge on Aug. 23, had a huge contingent at the Sept. 9 NYC Labor Day march and raised a banner at the Sept. 10 Mets game.

You can help the strikers in two ways: 1) sign a petition at spectrumstrike2017.com to NYC elected officials to “immediately pull Charter/Spectrum’s franchise agreement” with the city; and 2) donate at tinyurl.com/yasvhmw3 to help workers who are facing foreclosure and serious financial hardship.

In a thunderclap win, 2,000 striking auto mechanics in the Chicago area celebrated a victory after enduring a grueling seven-week strike beginning in early August.

Members of Chicago’s Auto Mechanics Local 701, the largest mechanics’ local in the country, demanded a faster way to become a “journeyman” or professional mechanic. By withholding their labor, they won the faster path — from 10 to 5 years! Mechanics also gained a base pay increase from a guaranteed 34-hour week to a 40-hour week and an across-the-board wage boost.

The New Car Dealerships Committee, a conglomeration of 140 car dealerships, fought against the union’s just demands. But as the strike wore on, some businesses lost faith in their cabal and broke ranks to bargain individually with the union. That really helped Local 701. In a statement, the union thanked family and community supporters who joined the picket lines, helped with monetary donations and cooked food and pastries. Workers’ solidarity = victory!

Led by Chicago’s Service Employees (SEIU) Local 1 and in solidarity with community coalitions such as Jobs with Justice and Arab American Action, the 8,000-strong, multinational contract workers at O’Hare and Midway airports — baggage handlers, cabin cleaners, wheelchair attendants, janitors, security officers, ticket collectors and de-icers — have won improvements in their jobs and lives.

Workers fought for and won an ordinance that raises contract workers’ minimum wage to $13.45 per hour starting July 1, 2018. As In These Times notes, this is well above the current minimum of $11 an hour. A “labor peace” agreement also clears SEIU’s union organizing for takeoff! (Sept. 11)

Airport work once paid decently, but in the race to the bottom in the 1980s and 90s, profit-thirsty bosses sought to outsource jobs to contractors offering the lowest bid. Since SEIU began organizing in airports in 2015, the Chicago Tribune reports, 110,000 airport workers, including many workers of color, have already scored raises.

Luis Alvarenga told In These Times, “I think what we need most is a union that sees the injustices and stops the abuses.” Hatem Abudayyeh of the Arab American Network concurred: “These workers are our own people: Black, Arab, Muslim, Latino, other immigrants.”

The Labor Department under the Obama administration raised the salary ceiling for overtime pay for workers earning less than $47,476, boosting the take-home pay of mostly women and people of color. The former ceiling had been $23,660. But that rule change was rejected by a Texas judge on Aug. 31. Previously the judge had granted a temporary stay on implementing the rule, scheduled to go into effect in December 2016, after it was challenged by corporate mouthpieces and 21 states.

Christine Owens, executive director of the National Employment Law Project, was quoted by Rewire: “For working people [in the U.S.] … this judge’s decision is one more reminder of how the rules are rigged in favor of corporate interests — and against ensuring that all who work for a living will make a decent living from work.” (Sept. 1)