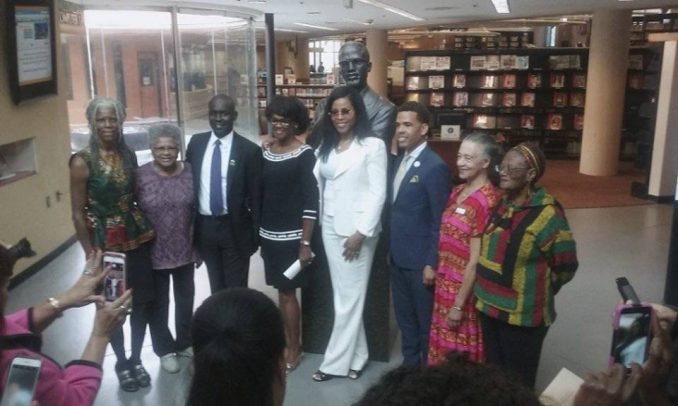 Ilyasah Al-Shabazz, daughter of Malcolm X, visited the Malcolm X Library and Performing Arts Center in San Diego for the first time on Sept. 14. Shabazz came to the city for a speaking engagement at the Aztec Student Union Center at San Diego State University. The Rev. Shane Harris, local chapter president of the National Action Network, arranged for her to meet with the Friends of the Malcolm X Library and to tour the only public library in the U.S. named after her father.

The Friends of the Malcolm X Library, including this writer, its staff, members of the community and some of the local media were there to greet Shabazz as she entered the library. Cell-phone cameras were flashing as she began the tour, led by library branch manager Lavonda Shaw. First was a viewing of the bust of Malcolm X and portraits of Malcolm X and Betty Shabazz mounted near one of the library’s entrances.

Cameras flashed as Shabazz observed the indoor fountain, which contains a quote by Malcolm X that reads: ”I have often reflected on the new vistas that reading opened to me. As I see it today the ability to read awoke inside me some long dormant craving to be mentally alive.” The group moved to the children’s section, where Shabazz knelt and gave a high-five to a youngster using a computer. The tour ended in the Teen Center.

After the tour, Shabazz returned to the bust of her father, and took pictures with individuals and groups for nearly 30 minutes. The group then headed to the performance annex, where she spoke. One of the first issues that Shabazz addressed was about homeless people sleeping on the streets: “It is really surprising to me. If I lived here that would be something I would work on because I can’t bear to see someone homeless.”

Shabazz said she had not known what to expect. She added: “It’s definitely heartwarming. It’s beautiful. It’s wonderful. I feel empowered. … I am sure my mother was very happy about this library being named after her husband. I love my people, and I understand that you are a reflection of me and I am a reflection of you.”

It has been over 21 years since Dr. Betty Shabazz, Malcolm X’s spouse, toured this library and was the keynote speaker at its opening in the Valencia Park community on Jan. 6, 1996. She commented then on the fountain, the children’s reading tower and the computer stations that were wired for internet connections.

During an interview at that time, Dr. Betty Shabazz said that she was tremendously pleased that a library had been named after her husband nearly 31 years after his slaying in New York and that she was wondering why someone else hadn’t thought of a library since so much of Malcolm X’s transitional phase could be traced back to the library.

Present during the daughter’s visit was Apollo Olango, brother of Alfred Olango, an unarmed Ugandan immigrant who was killed by El Cajon, Calif., police on Sept. 27, 2016. El Cajon is a suburb of San Diego. The Olango family has launched the Alfred Olango Justice and Unity Foundation to honor their beloved relative. As it continues to expand, the foundation’s goal is to bring justice and unity to the world.

Ilyasah Al-Shabazz is a community organizer, social activist, motivational speaker, and author based in New York City. Her official website is www.ilyasahshabazz.com