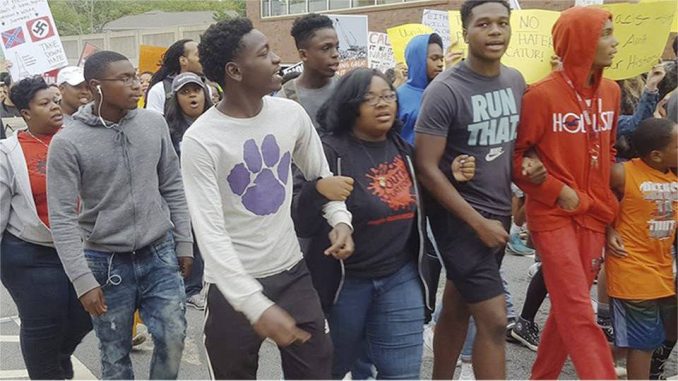 Decatur, Ga. — Several hundred people — a cross section of the city’s residents, including many students from Decatur High School — took to the streets in a march initiated by Hate Free Decatur on Sept. 10.

The grass-roots group formed spontaneously following a vigil for Heather Heyer, killed in Charlottesville, Va., on Aug. 12 by a neo-Nazi at a racist Unite the Right rally.

Hate Free Decatur’s immediate demand is the removal of the “Lost Cause Confederate Memorial” in Decatur Square in front of the Old County Courthouse and close to the current courthouse. Decatur Square, surrounded by restaurants and small stores, is the crossroads for public transportation and the location for many public events for the diverse communities living in the area.

The towering obelisk with its salute to white supremacy, honoring those who kept the “covenant” of racism, was erected in 1908 by the United Daughters of the Confederacy.

Just two years earlier, in 1906, 10,000 white men and boys rampaged through the streets of downtown Atlanta, killing and beating Black men and women, burning down their businesses and homes. By 1908, the Georgia Legislature had denied African Americans the right to vote.

To allow the Confederate monument a place near the doors of the courthouse continues to serve notice to Black people that they still have no rights.

Rally speakers included NAACP leaders, high school students, labor leaders, members of the clergy and other faith-based groups, immigrants, Black Lives Matter activists and city residents, This writer read a solidarity message from the Durham 14, the North Carolina activists arrested for the toppling of a Confederate statue in Durham on Aug. 14.

Georgia, like many U.S. Southern states, has a law forbidding the removal of any Confederate monument without legislative approval.

Sara Patenaude, a co-founder of Hate Free Decatur, made clear in her remarks that the struggle to rid public spaces of white supremacist symbols is only a part of the larger goal of ending all the institutionalized methods of criminalizing, denigrating and impoverishing people of color.