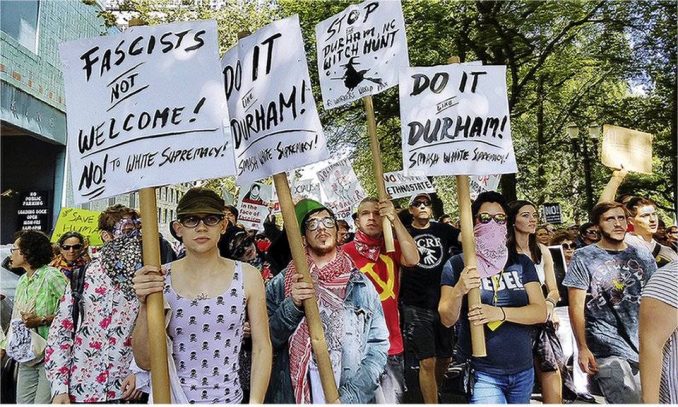 Portland, Ore. — A paltry showing of barely a dozen of Joey Gibson’s “Patriot Prayer” goons disgraced Portland’s Waterfront Park on Sept. 10 before they were swiftly driven out by anti-fascist warriors backed by thousands of working people acting in solidarity.

Portland police declared this action to be “violent and criminal” after they realized they would not be able to protect the gaggle of reactionaries from the crowd. The cops sprayed anti-fascists with “bear” mace and fired pepper ball bullets into the crowd, striking a Workers World comrade in the hand. The fascists fled under heavy police escort, at which point the crowd took to the streets, marching despite police threats to fire more pepper balls. The police retreated, and the anti-fascists regrouped in a park, where speeches were given by socialist organizations and representatives from the Indigenous community.

At the park it was announced that the main force of Patriot Prayer had rallied in their headquarter city of Vancouver, Wash., across the Columbia River from Portland. The Portland anti-fascists made their way north to provide support for their comrades in Vancouver. Portland police followed suit, making the crossing to help their northern counterparts in the Vancouver Police Department prevent the far-right demonstration from being interrupted.

However, once again the white supremacists were overwhelmed and surrounded — a crushing defeat in their own hometown!