Protests led by immigrant rights organizations have taken place from coast-to-coast following the Sept. 5 announcement by Trump administration attorney general and archracist, Jeff Sessions, to end the Delayed Action on Childhood Arrivals program.  Begun in 2012, DACA gave 800,000 young  immigrants, the “Dreamers” — who were brought here as children — the right to stay, study and work in the U.S., without the threat of deportation.

Sessions announced the elimination of DACA and warned these young immigrants, who have done nothing wrong and who work, pay taxes, study, have families and are tied to communities in the U.S., that they must plan to leave the country in six months. In a further attack on the rights of DACA recipients, confidential information given by them to the government is now being used against them by Immigration, Customs and Enforcement for the purpose of deportation.

This hostile, racist action by the Trump administration is an intensification of  its aggressive war on immigrants, especially people of color.  The bigot in chief in the White House began his election campaign with outrageous slanders against Mexican people and a pledge to build a wall between the U.S. and Mexico. Then he imposed a travel ban against people from Muslim countries.

Moreover, ICE is currently deporting undocumented immigrants at twice the rate of a year ago. Five million immigrant families are at risk of being torn apart by deportations; 5 million children face losing a parent by forced expulsion.

Many progressive organizations, labor unions, faith-based groups and elected officials have expressed solidarity with the young people who will lose DACA protection, in many cases joining them in the streets. It is a good sign that officials of the United Auto Workers, Service Employees Union, UNITE HERE! and other labor unions have denounced DACA’s termination.

However, it is crucial that all these forces and more show solidarity with, and support the right of, all 11 million undocumented workers, students and family members to remain in the U.S. Yes, a strong demand should be to uphold and expand DACA. And supporters should also call for full legal and civil rights for all undocumented immigrants in this country, so they can live, work, study and take care of their families, free of ICE harassment and deportation.

Here are highlights of protests against the administration’s decree to eliminate DACA, in addition to the many held in Washington, D.C. 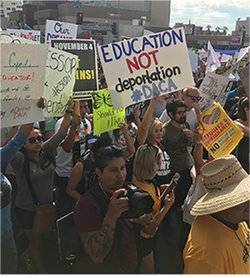 Over 10,000 Dreamers and their supporters filled the streets of Los Angeles on Sept. 10 to demand DACA protections. The march, which was organized by a coalition of groups, began with a rally at MacArthur Park and then snaked through the streets to Echo Park.  Everyone chanted, “If they won’t let us ‘dream,’ then we won’t let them sleep!” and “El pueblo UNIDO jamas sera vencido!” (The people united will never be defeated.)

After the Echo Park rally, thousands of protesters finished the four-hour demonstration at the historic downtown Placita Olvera. They all pledged to fight on to stop the deportations and protect DACA, with the slogan, “No hate, no fear! Immigrants and refugees are welcome here!”

Chanting “undocumented and unafraid,” thousands of Bay Area youth and their supporters took to the streets to loudly protest the Trump administration’s decision to end the DACA program. In San Francisco, on Sept. 5, the day of the decision, over 3,000 protesters took over the streets in front of the federal building. The rally was led by young Dreamers.

In Oakland on Sept. 9, nearly 500 people gathered at Oscar Grant Plaza for a speakout by Dreamers.  This rally was followed by a march through the downtown area to demand, “No bans, no walls, sanctuary for all!” Organizers at both actions promised to continue to build resistance against the decision to end DACA and to overturn all of the racist, xenophobic, anti-LGBTQ, anti-worker and inhumane policies emanating from the White House and Washington, D.C. 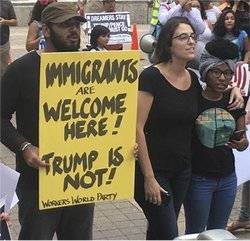 The day after Trump took their dreams away, hundreds marched and rallied in Houston to say, “We’re undocumented and here to stay!” The protest was organized by the Brown Berets de TejAztlan. César Espinosa, who is with Familias Inmigrantes y Estudiantes en Lucha, set the mood when he proclaimed: “We Dreamers will continue to realize our dreams.” As the march wound its way to City Hall, motorists honked and waved their support.

Hundreds marched in Milwaukee on Sept. 6 in a protest sponsored by the Young Peoples Resistance Committee and endorsed by numerous labor, student and faith-based organizations. 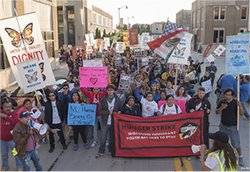 Hundreds marched in Racine on Sept. 5 to register their outrage over the Trump administration’s decision to end the DACA program. The lead banner was held by a group that had been on a hunger strike since the previous week to pressure Rep. Paul Ryan to push for a legislative overturn of Trump’s unilateral action. Voces de la Frontera and Youth Empowered in the Struggle sponsored the protest.

Prisoners at the Metropolitan Correctional Center, a federal prison in Chicago which holds many undocumented prisoners, cheered in support of a Sept. 5 demonstration of over 5,000 people protesting Trump’s announced termination of the DACA program.

Hundreds of youth, their families and community supporters gathered in front of the ICE building in downtown Atlanta on Sept. 4 to demand the continuation of DACA. The protest was organized by the Georgia Undocumented Youth Alliance, as well as many other groups, including Freedom University, Georgia Latino Alliance for Human Rights and Asian Americans Advancing Justice Atlanta.

The large crowd then marched to the Atlanta City Detention Center, which jails hundreds of poor men and women and also contracts out cells to ICE for immigrant detention. Demonstrators could see the waving hands and upraised fists of prisoners as they responded to the chants, signs and speeches passionately demanding justice, equality and freedom.

DACA recipients, undocumented workers, whole families of immigrants and those with citizenship papers made clear that the fight to win legal status and defeat anti-immigrant bigotry will not be derailed by any action of the Trump administration. The mood was defiant and unified.

Over 24,000 DACA  recipients in Georgia are students and/or workers. Under this program, many have graduated from colleges elsewhere due to draconian anti-immigrant laws that require them to pay out-of-state tuition at public institutions here. The ability to drive and work legally has allowed DACA youth to help sustain their families. 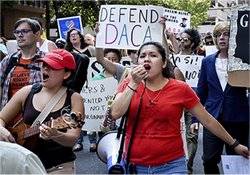 “DACA si! Migra no!” was chanted by 200 people, including labor unionists, in an important show of unity against white supremacy outside Department of Justice offices in Philadelphia on Sept. 5.  They gathered to support  undocumented workers and students as they awaited the Trump administration’s decision on DACA.  Sessions’ announcement of plans to dismantle DACA puts these young people at increased risk of deportation.

Several rally speakers, including people directly impacted by DACA’s elimination, denounced Trump and Sessions for repeatedly standing with white supremacists and against people of color. Speakers noted that

As Sessions gave the anti-immigrant announcement in Washington, rally participants took to the streets with chants loudly denouncing deportation, racism and increased repression of Black and Brown communities.  The march, warmly greeted by people in Center City, ended outside the federal prison and ICE offices with a chant, “You build a wall, we’ll tear it down!” 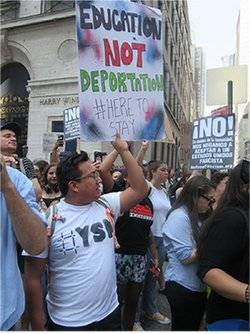 Thousands of people demonstrated on Fifth Avenue near Trump Tower in New York City on Sept. 5 to defend the Dreamers. Then they marched to Fifth Avenue and 57th Street where they blocked traffic. Several arrests were made when young militants carried out a civil disobedience action, “DACA Fight Back Midtown Shutdown!”

Many other local demonstrations have been held since Sept. 5, including on Sept. 9, to support the Dreamers. They called on the Trump administration to retain the DACA program.

A large crowd gathered in front of the federal building in downtown Rochester to defend DACA and obtain justice for all immigrants. The action was organized by the Workers Justice Center, with many community groups participating, including Workers World. 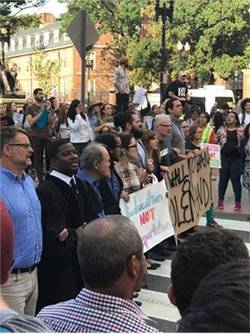 In Cambridge, 31 professors from Harvard University and Boston-area colleges were arrested on Sept. 7 when they blocked traffic-laden Massachusetts Avenue to protest Trump’s attack on DACA. Because their students include those affected by the DACA repeal, they were demanding the youth be given a pathway to legalization.

Forming a human chain, the professors were supported by 300 protesters, including members of UNITE HERE! Local 26 which represents dining hall workers and Service Employees Union Local 32BJ which represents custodians and guards. Both unions have members who are under Temporary Protected Status.  They have vowed to defend their DACA workers and the students on campus.