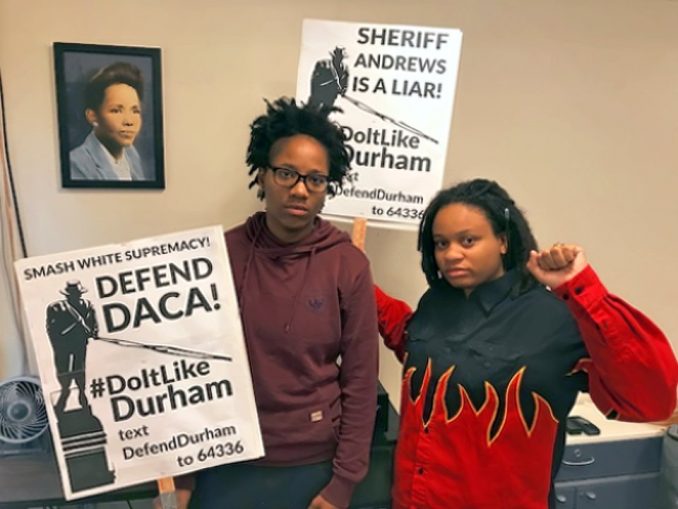 A letter from #DefendDurham arrestees to the Movement

From Charlottesville to Durham to the White House —

Aug. 12 marked a day of resistance in Charlottesville, Va. For months, it had been a frontlines site of progressive forces organizing to remove the symbols of the Confederacy from their town. The call from a local white nationalist to “Unite the Right” to defend these “cherished” symbols of white supremacist ideology came to a head on Aug. 12. More than 1,000 fascist, white nationalist and neo-Nazi groups converged and occupied the town, terrorizing the community and instigating violent confrontations.

We honor the thousands of resisters who confronted them, and we honor Heather Heyer, an anti-racist activist murdered that day.

On Aug. 14, reeling from the images and firsthand stories from Charlottesville, anti-racist and anti-fascist activists in Durham, N.C., decided that Durham’s own Confederate monument had to go. Hundreds of Durham residents attended the event, where HBCU student and Workers World Party member Takiyah Thompson scaled a ladder and placed a rope around the statue, throwing the rope to the crowd, inviting folks to tear down the white supremacist symbol. The result was the successful and much celebrated People’s Removal of the Confederate statue.

In response, Durham County Sheriff Mike Andrews has conducted a witch hunt against Durham’s Freedom Fighters. As of Aug. 31, there have been 14 arrests connected to the righteous takedown of the statue. Many of us are facing felony and misdemeanor charges. Simultaneously, those arrested have been targeted by the so-called “alt-right” through doxxing, hate mail and death threats.

Sept. 12 marks one month since Charlottesville. It is also the next court appearance for nine of us facing felony and misdemeanor charges related to Aug. 14. We are calling on anti-racist, anti-fascist people of conscience everywhere — across the world — to organize solidarity actions in your city from Sept. 11 through Sept. 17 or join us in Durham, to boldly and unapologetically proclaim: Toppling white supremacy is not a crime!

The present carries remnants of the past

What we witnessed in Charlottesville cannot be separated from the origins of the United States, the history of the U.S. South and the rise of fascist ideology in the last century. We are part of historic ideological struggles.

There are two sides: justice, equity and freedom, and the other side of domination, exploitation and oppression. We are not in a post-racial age. White supremacists today use the same arguments that slavers and eugenicists use(d) to justify violence and death of Black, poor and disabled people in this country.

We know that we cannot predict what this new period will hold — both opportunities for unity, and new, expanded threats. Today’s white supremacists are emboldened by the Trump regime. Widespread poverty, joblessness and suffering mean that entire segments of the population are considered disposable. Many have become prison slave labor. Meanwhile, many poor whites cling to rhetoric that scapegoats migrants, Muslims and poor Black communities as the cause of their own suffering

We say to Sheriff Mike Andrews: We will not let you bully, intimidate and isolate the people’s resistance. END YOUR WITCH HUNT! DROP THE CHARGES NOW!

We ask Sheriff Mike Andrews: Why have you prioritized punishing those who removed a racist statue over taking responsibility for the lives of the six prisoners who have recently died in your jails? Instead of sending 15 squad cars and 2 ambulances to look for a ladder at the home of anti-racist activists, we want you to stop lying about your ongoing collaboration with Immigration and Customs Enforcement to terrorize families and steal children from school bus stops. Instead of pushing for inhumane video visitations for the family and friends of prisoners, take responsibility for the death of 17-year-old ‘Niecy’ Fennell and step down from office.

The sheriff’s decision to prioritize property over people is nothing new. In

Charlottesville, countless witness accounts confirm that Charlottesville police stood idly by as demonstrators were attacked by white supremacists. The U.S. is full of overt and covert instances of collaboration and overlap between the Ku Klux Klan and law enforcement.

You cannot stop us! We will take ‘em all down!

A sleeping giant is waking. Not only do the people have the right to remove symbols and institutions of racism — we have the power. We are unafraid. We will not be complicit. We will not stand by. And we need everyone to become a soldier in this struggle.

The ideology behind erecting Confederate statues is the same ideology that defunds historically Black colleges and universities (HBCUs); that rescinds DACA; that pays police to protect property rather than sending aid to Black communities facing floodwaters; that pits workers against LGBTQ people through transphobic hysteria; that characterizes Muslims as terrorists while carrying out massive surveillance programs at home and abroad; that passes preemptive laws that limit local government and curb organizing and free speech; that wages international wars against Black and Brown people.

Durham removed our statue ourselves because it was the only way to do the right thing. Freedom Fighters took on the Nazis and Klan in Charlottesville because they had to.

Because we believe in and love our people.

Toppling racism is an act of love.

In order to win our future, we must understand our history, the history of poor and working-class people, the history of people of color who have been resisting repression and domination on this soil since Columbus. We call on the spirit of Harriet Tubman and John Brown to guide and inspire us to be bold and to take risks. Every opportunity in front of us is one where we can choose unity and action, or silence and complicity. We urge you to choose the first, to forge a collective path toward liberation for us all.

Organize where you are to topple racism and white supremacy! Use this moment to lift up and link up ongoing work to expose and undermine an ideology that refuses to recognize the full humanity of the majority of people on this planet. The time is now to reclaim public spaces; to change the course of history; to forge a new future.