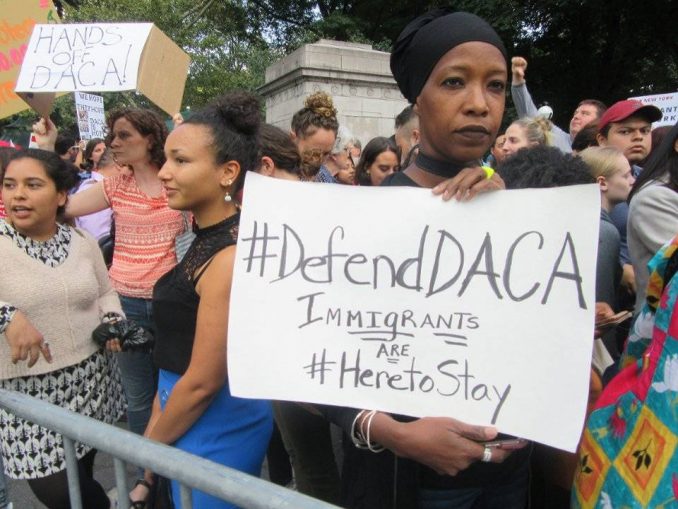 Just across the street from Trump International Hotel at Columbus Circle in New York City a powerful cry arose from 3,000 people as they gathered for the March to Defend DACA on Aug. 30. They yelled: “Say it loud! Say it clear! Refugees are welcome here!”

Demonstrators showed their outrage at the White House’s proposal to eliminate the Deferred Action for Childhood Arrivals program — despite the support of two-thirds of the U.S. population. DACA protects the “Dreamers,” immigrants younger than 30 who were brought to the U.S. as children.

Some 800,000 young people participate in the DACA program, which allows them to live, work and attend school in the U.S. If the program is overturned, they face deportation.

Supportive individuals and groups joined the demonstrations. They included members of the Service Employees Union, Local 32BJ; UNITE HERE, Local 100; and the Professional Staff Congress of the City University of New York. Immigrant rights, community, and other anti-racist and progressive organizations attended, as well as students and teachers from nearby John Jay College.

This large, multinational demonstration went on for hours, followed by a march to Trump Tower, ­another large Manhattan building with the bigot-in-chief’s name emblazoned on it in huge letters. The protest showed the growing strength of pro-immigrant forces in this city who chanted, “Say it loud! Say it clear! DACA kids are welcome here!” See #Defend DACA and #March for DACA.