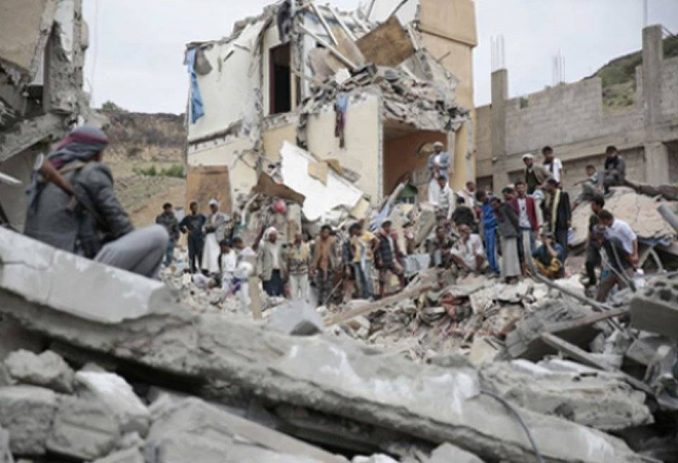 With international silence and virtually nonexistent media coverage, Saudi Arabia continues carrying out its war crimes in Yemen. The Saudi-led coalition has accelerated its strikes against Yemen on a daily basis, targeting homes, farms, cars and more.

The U.S.-backed Saudi forces bombed a hotel near the Yemeni capital, killing 60 people on Aug. 23. At least 30 civilians were killed or wounded. An Aug. 25 coalition airstrike killed at least 16 people, including seven children. The Saudi government called the attack, which destroyed two residential buildings, a “technical mistake.”

In the southern governorate of Taiz, nearly a dozen air strikes have destroyed civilian infrastructure, including a farm.

Air raids and hovering drones have become a nightly occurrence in Yemen’s capital city of Sana’a. The Saudi coalition attacks have hit several areas, including the September 21st Park, which commemorates the victories of Yemen’s Ansarullah revolutionary movement. The raids in Sana’a damaged civilian homes and businesses. Along Yemen’s western coast, war planes launched over a dozen air strikes against areas of Hodeidah and Midi.

Yemeni forces have increased their assaults in Najran, Jizan and Asir provinces in retaliation for Saudi Arabia’s ongoing war. These provinces are technically on the Saudi side of the border, but were previously part of Yemen’s territory. Yemen’s highly skilled Sniper Unit operates specifically in these areas.

According to a leaked U.N. report, Saudi coalition forces operating with support from the U.S. and Britain have killed 502 children and injured at least 838 more. (foreignpolicy.com, Aug. 16) They have also destroyed nearly 30 schools. Local organizations estimate the number far higher.

Saudi Arabia and its allies have killed thousands in Yemen since 2015 — with full support from the U.S. government and Western powers. The U.N. Human Rights Office has documented 13,829 civilian casualties, including 5,110 people killed, in the two-year war. Many believe the overall death toll is much higher.

The impoverished country is also experiencing a globally unprecedented epidemic of cholera, which is mainly caused by unsafe drinking water — in Yemen’s case, from widespread bombing of the infrastructure. Some 500,000 are estimated to have become infected, and more than 2,000 have already lost their lives to the disease since April.