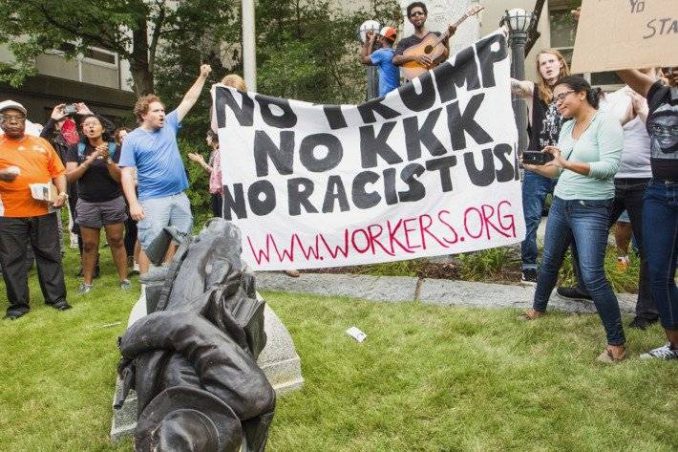 Activists mobilize, support each other

Durham, N.C., Sept. 4 — As community members, activists and allies gear up for actions to continue their fight against white supremacy here on Sept. 12 — and as national and international solidarity grows with them — fascist individuals and forces of the state have colluded in an attempt to instill terror against them.

Rather than retreat, those struggling for justice and liberation are uniting, supporting each other and continuing to mobilize.

A national call to action has been issued for the week of Sept. 11 through Sept. 17, with organizations and individuals coming to Durham from around the country for Sept. 12 and planning local actions throughout the week. Sept. 12 is the one-month anniversary of the resistance to white supremacist forces in Charlottesville, Va., where Heather Heyer was murdered by a fascist who plowed into protesters with his car. It is also a court date for some of the arrestees in Durham. Activists will converge on the courthouse on the morning of Sept. 12 to show their solidarity with the arrestees, then march in a “victory parade.” The next court date for the others arrested is Oct. 11.

To date, 14 Durham activists have been arrested in relation to two events: the toppling of a Confederate statue in front of the old Durham county courthouse on Aug. 14, and a rally to oppose a planned Ku Klux Klan march on Aug. 18. Despite outcry by members of the City Council and community members who lined up to be arrested in solidarity on Aug. 16, these 14 have been slapped with charges ranging from misdemeanors to felony offenses, including charges of incitement to riot and carrying open weapons “to the terror of the people.” Of course, no Klan members, neo-Nazis or the police — who routinely use weapons and racism to terrorize and incite violence — have been charged with any of these offenses.

Protesters see the attacks by the state against them as a form of direct retaliation by Durham County Sheriff Mike Andrews, who has insisted on the felony charges and has come under attack in recent years for his policies. Conditions at the Durham county jail, under Andrews’ auspices, are so horrific that at least five imprisoned people have died there as a result, including 17-year-old Uniece “Niecey” Fennell in March. In Andrews’ most recent outrage, prisoners have been restricted to video-only visits with their loved ones. The Durham sheriff’s office has also colluded with Immigration and Customs Enforcement.

Beyond Durham, at least two students have been arrested who were engaged in an occupation in front of a “Silent Sam” statue at the University of North Carolina at Chapel Hill. The statue was erected in 1913 to pay tribute to UNC alumni who joined the Confederate army during the U.S. Civil War. In addition, a young African-American man was arrested in Graham, N.C., after he allegedly posted a comment on social media regarding a Confederate statue there.

In an extension of the fascist violence used against protesters in Charlottesville on Aug. 12, community members in Durham have faced a number of attacks, including death threats and doxxing (the posting of activists’ contact and identifying information on right-wing websites). Twice a brick was thrown into the glass door of a West African restaurant that regularly hosts progressive community events. A white supremacist recently walked into a movement-friendly Indian restaurant and threatened everyone inside.

Yet, the community has vowed, in the words of Assata Shakur, to “love each other and support each other.” Squads of activists with electrician and carpenter skills have gone to movement homes and offices to install security systems. Others have volunteered to stand guard. With each new arrest warrant, protesters have gathered at the jail to rally around those who have turned themselves in, chanting, “We see you! We love you!” A weekly protest at the Durham county jail continues.

Meetings to strategize and organize are multinational and multigendered, with people of all ages coming together against fascism and racism. A Sept. 9 block party held at the Hayti Community Center, in the heart of the Black community, will be a space to celebrate the Durham community’s unity, resilience and resistance.