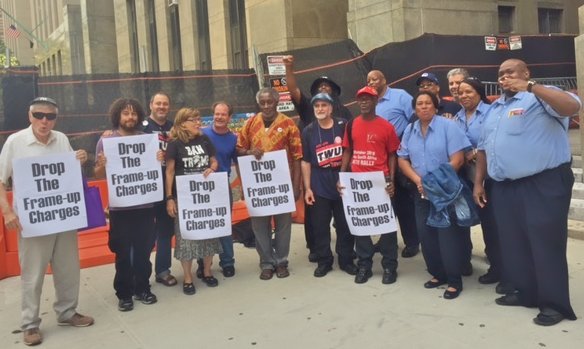 A Black transit worker in New York City has died from stress-related health conditions after he was falsely arrested while on the job, and after harsh and unjust punishment by the Metropolitan Transit Authority. His death has sparked unity among union members worldwide, community activists and transit justice advocates.

When Goodwin didn’t immediately drop what he was doing, the cop approached and escalated his yelling.  Next, Goodwin was handcuffed and charged with obstructing governmental justice, assaulting a police officer and resisting arrest. Transit bosses hit him with an immediate unpaid suspension that lasted six weeks.

To bolster the outrageously false charges, the arresting officer fed a bogus story to the media that this worker had refused to assist the police in their pursuit of a shoplifter, omitting the fact that police have other means to get themselves into any subway.

Station agents in TWU Local 100 supported Goodwin in court on June 29.  Activists with the NYC Workers Defense Committee (WDC) knew it was important to try to stop this attack on a worker, so they organized community activists to help pack the court for the next hearing.

When the presiding judge in a Manhattan courtroom on Aug. 10 called the name of Darryl Goodwin, 60 people stood up. The crowd included relatives of Goodwin and of Guinean immigrant and cab driver Mohammed Bah, fatally shot by the New York Police Department during a reported mental health crisis in 2012. Also standing in solidarity were members of the Universal Zulu Nation, Parents to Improve School Transportation, the People’s Power Assemblies and Workers World Party, as well as a multinational delegation of transit workers wearing blue uniforms or union shirts.

Those physically present also had moral support from the World Federation of Trade Unions, representing 92 million workers, which sent a solidarity statement from its Athens, Greece, office.

Goodwin himself was too ill to attend, foreshadowing the tragedy that was to come. The judge, with the office of the Manhattan District Attorney behind him, rejected a motion to dismiss charges. A jury trial was set to begin in six weeks.

But by Aug. 16, the union was announcing sadly that Goodwin had passed away. Their statement cites his friend, TWU Vice President for Stations Derrick Echevarria, who said: “We believe this unwarranted arrest had an underlying effect on his demise. Darryl was stressed out and working a lot of overtime to recover the wages he lost.” (tinyurl.com/y9473kco)

The TWU statement also notes that, in May, arresting officer Lt. Khalaf and his cop cronies made hateful comments on Khalaf’s Facebook page, lashing out at the Black Lives Matter movement.

NYC WDC had created a fundraising campaign to help Goodwin with his legal expenses and missed pay. Those donations, including $100 from a London Tube driver, have now been given to his sibling. (The fund at tinyurl.com/yctc9nga ends Aug. 30.)

The group also posted an online petition that gathered 50 signers a day at first, and 500 in one day after Goodwin’s death was publicized. Comments from signers included: “I think police have too much power and they enjoy misusing it to exploit innocent working people every day. Something has got to give!” and (referring to Goodwin’s employer) “It’s a crime that Transit let the police harass this man to death.”

At the large and loving funeral service on Aug. 21, TWU’s Echevarria repeated: “We are all Darryl Goodwin. Any one of us could have been in that situation.” Goodwin’s union and family intend to clear him of the charges posthumously.

Readers are urged to share tinyurl.com/yc9kq95u and to check the Facebook of the NYC Workers Defense Committee for future acts of solidarity.