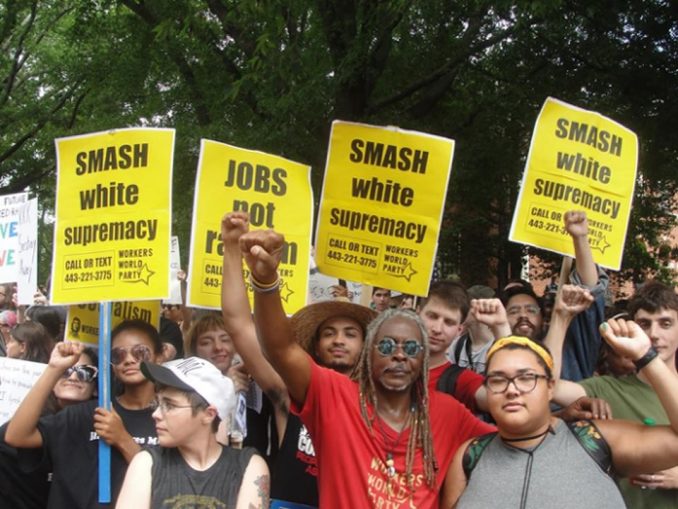 Charlottesville, Durham, Boston, New Orleans and more — anti-racist actions all across the country are proof of a sea change in the struggle against white supremacy.

It began on Aug. 12 when thousands in Charlottesville, Va., stood their ground against heavily armed fascist forces. Those antifa, communist and left activists who faced down the fascists also exposed the role of the police before the entire country — a role already understood by most Black, Brown and Indigenous people. They were the first heroes of the week of struggle.

Charlottesville shocked the country, too, with the beating and injuring of Deandre Harris, a Black youth, and the cowardly murder of freedom fighter Heather Heyer.

When the president, who is the ugly face of U.S. rulers, himself lined up with the Nazis and Klan, it made it clear to many that the pinnacle of the government itself is to blame for the racist crimes.

That the police did nothing to stop the racist and anti-Semitic thugs came as a shock to many in this country who want to end the plague of white supremacy, and now realize that they have to do it themselves and defend themselves.

Young people in Durham, N.C., including Workers World Party members, answered the Charlottesville outrage by ridding that city on Aug. 14 of its shameful Confederate monument. With their action they showed that the people can take the fight for justice into their own hands.

This people’s toppling inspired a mass movement to rid the entire country of these symbols of slavery.

When seven people were then arrested in Durham, charged with felonies for this bold act against white supremacy, many forces came together to show the defendants that they were not alone.

At a court appearance on Aug. 17 for a few of those arrested, some 200 people showed up at the sheriff’s office in a magnificent display of solidarity. Scores of them volunteered to “confess” to helping topple the statue three days earlier. They collectively accepted responsibility for the action, although the Durham prosecutor refused their “confession.”

The next day, when the Ku Klux Klan threatened to rally in Durham, many youth from Durham’s Black community joined the activists and spent hours seizing the space, stopping the Klan from showing its face. The racists had to settle for a small, symbolic appearance late in the day away from the announced place.

Throughout the U.S. there were hundreds of protests and vigils in solidarity with Charlottesville anti-racists and inspired by the Durham initiative.

An attempt by Klan and Nazi elements to call an “alt-right” action in Boston Commons on Aug. 19, disguised as a “free-speech” rally, galvanized reaction by a multinational mass wave of struggle. Some 40,000 people came into the streets, defying physical threats and following the leadership of Black Lives Matter organizers and other Black and Brown people, led by women, to overwhelm the racists by 500 to 1. (See article by Diva Williams.)

In Baltimore, in anticipation of a popular action, the mayor and City Council removed four Confederate monuments in the wee hours of the morning of Aug. 16.

In New Orleans, Take ’em Down NOLA, which has been campaigning to remove a Confederate monument for years, and others held a mass rally of 2,000 people on Aug. 20.

In the San Francisco Bay Area, the mostly Black workers of the International Longshore and Warehouse Union announced they are making plans to show the potential for working-class action in this country against racism.

In Philadelphia, Black and other organizations have targeted the statue of Frank Rizzo, a racist former police commissioner and mayor. This action brings the anti-racist struggle together with the history of resistance to police brutality and murders of people in the African-American community.

Durham activists from many organizations, inspired and encouraged by the massive support they got during the week, are now coming together to form a united organization to fight racism. A success in Durham can inspire more of the same throughout the U.S.

It is encouraging for the building of a united struggle against racism that national figures like Prof. Cornel West thanked the Antifa forces for their role in physically confronting the fascists and maintaining the safe and organized resistance in Charlottesville.

Those on the front line of the struggle — and they are all Antifa in the sense that all share a desire to root out the violent racists — need the support of all thinking people who want no part of a racist USA.

A good first step is to support Takiyah Thompson — the young Black woman pioneer in this struggle who hung the rope around the neck of the Durham statue — and the six other defendants in Durham. Their local supporters ask that you: