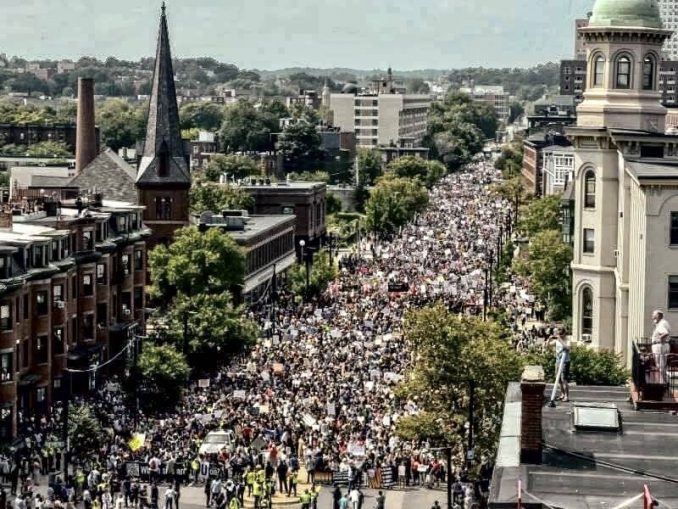 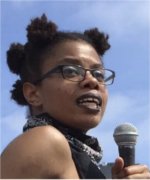 Revolutionary Black love saved Boston on Aug. 19. A group including queer, disabled, Afro-Latinx, working-class Black activists consolidated their resources, knowledge and radical discipline. Every intersection raised itself up, aided each by the others, to utterly crush a fascist onslaught.

Three months earlier, in May, a repugnant collection of Klansmen, neo-Nazis, “Proud Boys,” “Oath Keepers” and various unaffiliated white nationalists attempted to march on Boston’s Freedom Trail. The Freedom Trail is a popular tourist attraction that links historical landmarks in the city, including a number of Black heritage sites.

The May 2017 fascist rally was tenuously held at bay by a small group of daring Antifa defenders. In early August, those same defenders informed this author that the fascists planned to return in force.

Monica Cannon-Grant, of Roxbury-based Violence In Boston, sparked the flame. Her widely shared Facebook event page was meant to help put bodies on the line and physically block the planned racist rally at the Parkman Bandstand in Boston Common. “We can’t be complacent,” Cannon-Grant told Facebook viewers on a live video feed. “We need to show up and let them know we are not scared — this is our city!”

Overnight, thousands answered Cannon-Grant’s call, committing to show up for a rally in Roxbury and then march downtown to join with other counterdemonstrators and block the racist rally.

Black Lives Matter-Cambridge organizer DiDi Delgado and an international collective of Black activists from Louisville, Ky., Washington, D.C., Baltimore, New Jersey, upstate New York and Toronto came together in solidarity with the Boston forces to coordinate this timely and necessary response. This author joined them as a queer, Black, Afro-Latina with disabilities and a representative of Workers World Party.

It is no secret that one of the sicknesses of this vile racist system is divisions and chauvinist exclusions that can seep into and infect our social movements. Boston is not immune to this. However, in the face of the impending violent attack on the people, which every white supremacist, “free speech” rally has come to implicitly promise, a broad swath of radical and revolutionary currents came together in the name of anti-fascism.

In the week leading up to the rally and counterprotests, Boston’s establishment politicians had ample opportunity to deny permits for the fascist rally. They didn’t. Instead, the mayor’s office issued mild statements of condemnation for the fascists’ racism and then went to work with the cops, doubling down on a massive, military-style police operation to defend any fascists who wanted to show up.

Tens of thousands pour into the streets

The “Fight Supremacy” march, secured by volunteer marshals from the community and by Antifa, began with a rally at the Reggie Lewis Track and Athletic Center in the Roxbury section of Boston. It was crucial to begin in this neighborhood, where anti-segregation street battles raged in the 1970s and where gentrification jeopardizes Black people’s access to fairly priced housing.

Waves of people arrived throughout the morning, filling Malcolm X Boulevard to overflowing and chanting, “Whose streets? Our streets!”

A short rally kicked off the procession, raising voices of Native, Latinx and Black community leaders. “The city has no right to grant a permit to these racists; the site is stolen Native Land,” Mahtowin Munro, of United American Indians of New England, reminded the huge crowd. “Indigenous people have more than 500 years of experience dealing with white supremacists, and our ancestors are with us today.”

The march poured onto Tremont Street, overflowing four lanes and stretching more than six blocks. People cheered from stools and windows, many joining the march from sidewalks, until an estimated 40,000 had massed with the procession. The iconic sound truck of Steelworkers Local 8751, Boston School Bus Drivers — a truck well-known to area activists and protesters — fulfilled its usual role of literally amplifying the voices of the most oppressed among us.

Before the contingent reached the contested Parkman Bandstand, the fascist threat had mostly been subdued. The sheer number of anticipated counterprotesters caused well-known bigots Gavin McInnes, “Augustus Invictus” and others to cancel their participation. Some had been escorted away from protesters by Boston Police Department bodyguards. Most had failed to show their craven faces. The remaining 20 or so were chased off by those already gathered on the Common.

At the heart and head of this action were Black women. The rallying cries demanded that the people trust, believe and follow Black women. These women tirelessly organized everything, from accommodations for people with disabilities to ensuring food, child care, shelter and transportation for the Black sisters, brothers and siblings whose diligent labor made this action possible.

Black-led, proactive fundraising ahead of the action enabled a swift, organized response to bail out every one of the 37 people who were unjustly brutalized and arrested by Boston police in full riot gear after the final rally dispersed.

Attending to every conceivable need that the community has — and deserves to have met — was a conscious consideration in organizing. Lifting up those who experience oppression, repression and other barriers to participation in fighting back was a primary goal. And over the course of about six days of round-the-clock organizing, this unified, intersectional, nonsectarian collaboration under the leadership of Black women revealed its power to heal — for a day — fractures among progressives and left forces in Boston.

The reclaimed Boston Common was the site of several victory rallies after the fascists were routed. In one area of the park, a multinational crowd of about 5,000 gathered to share messages of solidarity with one another’s struggles.

Nat Heathman, a Native and Black Two-Spirit activist, told the gathering, “The white supremacy we fought back against here today is part of a whole oppressive system of capitalism — and we need to bring this kind of resistance to the fight against the whole capitalist system.”

This author also spoke to the crowd, reminding them: “This is not a one-day deal. We ain’t finished yet. Together, we shall determine the tactics that we will employ to defend each other and secure our future. It is our duty to fight for our freedom. Together, we will win.”