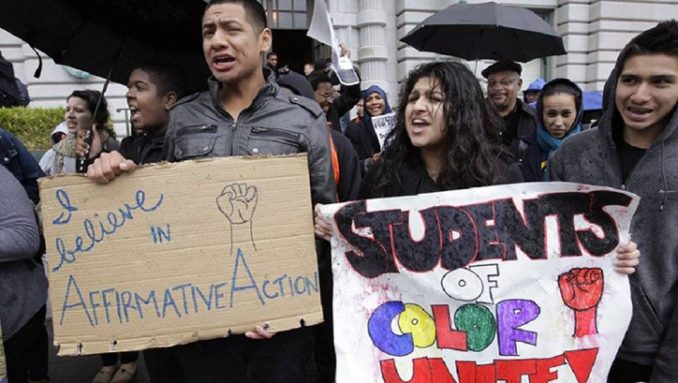 The latest attacks on affirmative action by the Trump administration and the Department of Justice aim to turn back the clock and heighten the divide among oppressed groups. While the current debate attempts to push through an agenda that purports an illusion of equal access for all, the facts reveal that institutionalized racism remains rampant across all areas of education and employment.

To fully grasp the gravity of what’s at stake in this struggle, we must go behind the veil and follow the intersections of white supremacy, education, money and power. In the book, “Classroom and The Cell,” Mumia Abu-Jamal states: “Since the 1954 Brown v. Board of Education decision, where the Supreme Court outlawed segregation in public education in America, powerful social forces have tried to defeat it. … Something insidious began with Brown and it ain’t never stopped.”

In a follow-up to the infamous 1978 Bakke case, when a U.S. Supreme Court ruling pushed back affirmative action, Blum was one of the driving forces behind the 2015 Fisher v. University of Texas lawsuit. Under Blum’s sponsorship, Abigail Fisher, a 23-year-old white woman, filed a lawsuit challenging the use of race in college admission. The U.S. Supreme Court upheld the basis of the law in a narrow 4-3 decision.

Now, with the election of Trump and his appointment of racist Jeff Sessions as U.S. attorney general, the Department of Justice is being used by right-wing forces to dismantle hard-fought protections for access to education for students of color.

These attacks are alarming, but we have also seen the power in a united movement against imperialism, capitalism and all forms of racism.

This is a revolutionary understanding of affirmative action in theory and practice.