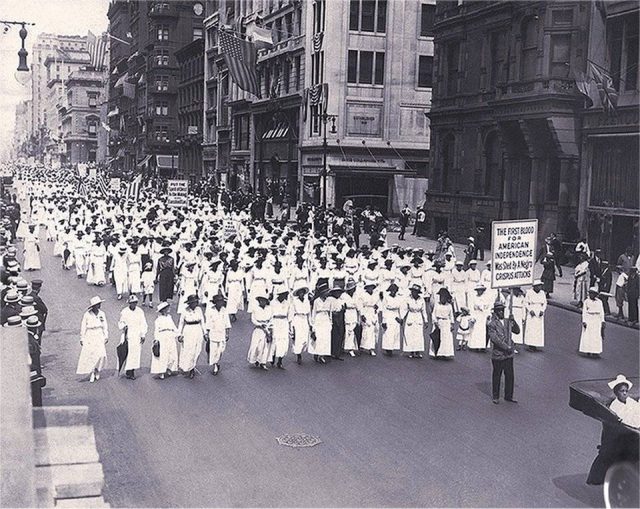 An estimated 10,000 African-American women, men and children participated in a silent march in New York City on July 28, 1917, to protest racist violence, lynchings and other injustices. The NAACP organized the march, as well as church and community leaders who saw the importance of Black people having their own demonstration because they were the main victims of recent violence.

The march protested brutal attacks by white racist mobs on the Black population in East St. Louis, Ill., as well as lynchings in Waco, Texas, and Memphis, Tenn. The action was recognized as one of the earliest mass demonstrations by African Americans and was viewed as a precursor to the Civil Rights Movement.

The solemn parade took place on Fifth Avenue from 57th Street to 23rd Street in Manhattan. Marchers carried banners and signs reading: “We march because we deem it a crime to be silent in the face of such barbaric acts” “We march because we want our children to live in a better land” “Thou shall not kill” “Mothers, do lynchers go to heaven?” “Your hands are full of blood” and “Make America great for democracy.”

There were no chants or songs; only the rhythmic sounds of marching feet, led by a line of muffled drummers, could be heard. Children marched in the front, wearing white. Women, also in white, marched behind them, and men wearing dark colors followed.

“Why Do We March?” circulars were distributed before and during the parade. The action’s goal was to promote anti-lynching legislation and rights for Black people. About 4,000 Black men, women and children were lynched with impunity from 1877-1950, reported the Equal Justice Initiative in 2015. Thousands of racist whites in Southern cities watched these atrocities.

Weeks before the New York march, racial tensions grew between Black and white workers in East St. Louis. Historic migrations of African Americans from the South occurred as they fled Jim Crow segregation, discrimination, disenfranchisement, oppression and terrorism by racist whites. They traveled to find jobs in industrial centers where labor was scarce due to World War I.

However, some white workers saw the arrival of African Americans as a competitive threat to their jobs, wage security and privileges. Many traditionally “white” craft unions shamefully hindered or excluded Black workers from union membership, labelling them strikebreakers. Yet they were also condemned for not joining unions. Though refused opportunities, Black workers’ abilities were disregarded.

East St. Louis was a great industrial center, with huge meatpacking and manufacturing facilities — and it was one of the largest markets in the country for unskilled labor. In 1916, when thousands of white workers struck packing plants, company owners used Black workers from the South as strikebreakers. After the strike, Black workers retained their jobs and received the same wages as their white predecessors.

In 1917, mostly white workers struck American Ore Company, which then hired white and Black workers as strikebreakers. Racists whipped up hostility to the Black workers.

On July 2, 1917, the New York City NAACP sent Du Bois and writer Martha Gruening to East St. Louis to investigate the racist outrages that had begun the night before. The September 1917 issue of the NAACP magazine, The Crisis, wrote about “The Massacre of East St. Louis” and “The Negro Silent Parade, New York City.” Detailed reporting, eyewitness accounts, survivor testimonies and photos were included.

The magazine included a May 23, 1917, letter from Edward Mason, secretary of the Central Trades and Labor Union in East St. Louis. He referred to “the immigration of the Southern Negro into our city for the past eight months. … Since the influx of undesirable negroes has started no less than ten thousand have come. … [T]hey are being used to the detriment of our white citizens.” Black Southerners were considered outsiders, as opposed to white ethnic immigrants. The fact that Blacks were also Americans meant nothing to these union leaders, noted The Crisis.

Mason called upon union delegates to go to City Hall to demand that the mayor and the city council “take some action to retard this growing menace and devise a way to get rid of a certain portion of those who are already here.” Union leaders’ rhetoric fueled the violence. Some unionists threatened mob rule if the authorities took no action against the Black population. The riot “was deliberately planned and executed,” reported The Crisis.

Thousands of white men, women and teens descended on East St. Louis, viciously attacking African Americans. White militias refused to protect the Black population, declaring they were there to guard whites against them, observed the magazine.

The Crisis described how racist mobs took pleasure in the suffering of their victims and boasted about killing “n——rs.” Their manhunts were sporting events. They bashed in heads, gouged out eyes, dragged Black people from street cars and through the streets, beat and stoned them, snatched babies from their mothers, beheaded Blacks, kicked corpses, lynched and even burned people alive.

Rioters cheered when they shot their victims as they fled from their burning homes. The riot lasted 24 hours. From 100 to 200 Black people were killed, and 6,000 were forced out of their homes.

The NAACP appealed to President Woodrow Wilson. Though he made an election promise to implement anti-lynching laws, he refused to do so. After the march, Black leaders involved in the protest went to Washington to meet with Wilson, who did not keep the appointment. They left their petition for Wilson, urging him to prevent future racist riots and lynchings. Federal discrimination against African Americans actually increased during Wilson’s presidency.

In June 2012, the NAACP organized silent marches across the country to protest police stop-and-frisk practices toward African Americans. A federal judge ruled in August 2013 that the New York Police Department practice was unconstitutional.

Prior to this year’s 100th anniversary in St. Louis, there was a week-long commemoration of the riots and march. About 300 people marched in silence. In New York, a planned anniversary re-enactment of the silent march, set for July 28, was not granted access to Fifth Avenue because Trump Tower is located there, so it was held on Sixth Avenue. Participants displayed portraits of current victims of racist police and vigilante violence from around the country.