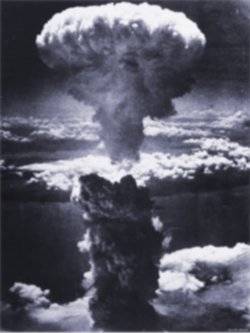 On Aug. 9, 1945, the U.S. dropped the second atomic bomb ever deployed in conflict, hitting the Japanese industrial city of Nagasaki. On Aug. 9, 2017, President Trump threatened a nuclear bombing of People’s Korea.

Since 1950, the Democratic People’s Republic of Korea — north Korea — has lived under the shadow of a U.S. nuclear attack.

Gen. Douglas MacArthur, who commanded U.S. forces during the Korean War, told reporters in 1954: “I could have won the war in Korea in a maximum of 10 days. … I would have dropped between 30 and 50 atomic bombs on [the] air bases and other depots strung across the neck of Manchuria.” (New York Times, April 9, 1964)

MacArthur’s shocking remarks weren’t made public until after his death 10 years later. But his proposal to lay down a radioactive belt on the border between the DPRK and China was known at the time of the war. President Harry S. Truman fired MacArthur in 1951 after the general openly pushed to extend the war to China.

Although MacArthur was removed from his command then, U.S. nuclear weapons were, and still are, ready to strike north Korea — “locked and loaded,” in President Trump’s recent boastful, gangster language.

Several times each year, the U.S. carries out war exercises close to the borders of the DPRK simulating an attack on that country and the “decapitation” of its leadership. Another is set to begin Aug. 21, involving tens of thousands of U.S. and south Korean troops.

This persistent U.S. threat of war is why the DPRK has allocated precious resources to become one of the world’s nine nuclear weapons states. It is now estimated to have around 30 such bombs — out of the more than 15,000 nuclear warheads in the world.

The U.S. accounts for nearly 7,000 of those warheads. Yet the DPRK is now the target of a screaming propaganda campaign accusing its leader, Kim Jong Un, of wildly leading the world into a nuclear war.

The U.S. has bases all over the world. It has militarily occupied south Korea since 1945, keeping the Korean people divided. It recently deployed a missile system called THAAD in the south, despite desperate resistance from the people there.

This has intensified the worry of Koreans in the north and in the south that the U.S. could be planning a military attack on the DPRK. And Trump’s recent words threatening the DPRK with “fire and fury like the world has never seen” deepened that concern, even drawing public criticism from several officials of the Moon Jae-in regime in south Korea.

How Koreans look at Trump

Ever since the election of the most openly right-wing president in recent U.S. history, the capitalist media have been full of speculation about Trump’s unpredictability, his ego-driven pronouncements and tweets, his obvious ignorance or denial about crucial issues, from climate change to international relations.

If even those “in the know” here are speculating about what atrocities Trump could be capable of, what are the leaders of the DPRK to think? Isn’t it absolutely their duty to do all they can to prepare for the defense of their people? Especially since the White House is packed with military brass and the budget for war spending keeps growing at the expense of social programs.

The election of Trump and his subsequent refusal to renounce the support of racist, fascist and neo-Nazi elements like the KKK has given a boost to white supremacists, who just held an armed occupation of parts of Charlottesville, Va., in which one anti-racist demonstrator was killed. Trump refused to condemn the white supremacists, who boasted they helped elect him.

The world is watching these developments in the U.S. with horror, especially people living in countries that have been colonized, neocolonized and superexploited by the imperialist powers.

Korea is one such country. It was brutally colonized by imperial Japan from 1910 to 1945. During World War II, many Koreans were forcibly moved to Japan to labor in the mines and other jobs to take the place of Japanese workers drafted to fight in the war. Some 30,000 of these Korean workers were among the hundreds of thousands of people killed by U.S. atomic bombs dropped on Hiroshima and Nagasaki.

To justify its hostile actions, the U.S. government has refused to sign a peace treaty ending the war that began 67 years ago. It has ringed the DPRK with military bases. In recent years, Washington has encouraged the rearming of Japan and has included Japanese armed forces in its annual “war games.”

How must that look to Koreans? After so many years of U.S. war, occupation and threats, it surely doesn’t seem to be a “game.”

It is perfectly understandable and rational that the unrelenting U.S. threats of war have only added to the determination of the DPRK to have a strong deterrent against aggression.