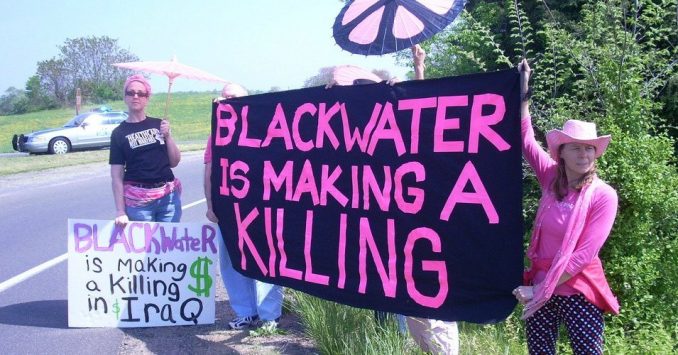 A demonstration during the 2014 trial of four Blackwater mercenaries, convicted then of murder and manslaughter in the 2007 massacre of Iraqi civilians.

In a split decision on Aug. 4, a three-judge panel of the U.S. Court of Appeals ordered a new trial for a Blackwater mercenary convicted of murder for his part in the massacre of 14 civilians at Nisour Square in Baghdad, Iraq, in 2007, along with the wounding of 17 more. The court also ordered new reduced sentences for three other Blackwater mercenaries convicted of manslaughter from that same attack.

There were between 20,000 and 30,000 “security contractors” hired by the U.S. during the height of the Iraqi occupation. The Baghdad massacre was one of the worst, but by no means the only attack on the Iraqi people carried out by these hired guns. By 2007, Blackwater held a billion dollars’ worth of contracts with the U.S. government, most of them no bid.

The U.S.-installed Iraqi government, though dependent on Washington, still demanded a trial of these Blackwater murderers in Iraq. Washington rebuffed its Iraqi clients and insisted on a trial in the U.S.

In 2009, a federal judge threw out the charges that the U.S. had brought against these killers. This aroused tremendous international pressure. In 2011, an appeals court reversed that ruling and reinstated the charges.

When the trial was finally held in 2014, some 30 Iraqis had to make the long journey to Washington to testify.

The Iraqis’ testimony was heart wrenching: “Mohammed Hafedh Abdulrazzaq Kinani broke down last week as he talked about his 9-year-old son, Ali, who was shot in the head while riding in the back seat of the family car. Mr. Kinani sobbed so uncontrollably that Judge Royce C. Lamberth sent the jury out of the room.”

Sarhan Deab Abdul Moniem was a traffic officer that day. “A convoy of Blackwater Worldwide trucks pulled into his traffic circle in Baghdad and started shooting. ‘There was a lady. She was screaming and weeping about her son and asking for help,’ Mr. Moniem said. He showed jurors how she had cradled her dead son’s head on her shoulder. ‘I asked her to open up the door so I could help her. But she was paying attention only to her son.’” (Quotes from New York Times, June 25, 2014)

The outcry over Blackwater’s atrocities forced the company to change its name twice, but not its mode of operations. Along with other mercenary corporations, it continues to have the support of the U.S. government.

U.S. to use more mercenaries?

The overturning of these convictions comes at a critical juncture as the Trump regime is battling its own generals over the U.S. military failure in Afghanistan. It enables Trump to press a strategy of bringing in highly paid private armies of mercenaries to train Afghan police and soldiers and, most importantly, to guard metal and rare earth mines that the president wants to open for U.S. companies’ exploitation.

At a July 19 meeting with U.S. generals, Trump berated them for “not winning” the war in Afghanistan, asserted that the U.S. head general should be fired and asked about the U.S. “getting a piece” of Afghanistan’s mineral wealth. (abcnews.com, Aug. 2)

Erik Prince, the founder of Blackwater and a huge donor to the Trump campaign, wrote an article in May for the Wall Street Journal arguing for the president to install a “viceroy” in Afghanistan, backed up by legions of mercenaries overseen by the CIA. Prince even extolled the East India Company, infamous for its corruption, violence and plunder of India in the British colonial period. (washingtonpost.com, July 27)

While Prince’s sister, Betsy DeVos, who is Trump’s secretary of education, presses for privatizing schools, Prince is for privatizing troops for U.S. imperialism, with huge profits from government contracts. “[The] private sector, Prince argues, can operate ‘cheaper and better than the military’ in Afghanistan.” Called the “Laos option,” Prince’s strategic proposals are reportedly heavily favored by Trump’s advisers Steve Bannon and Jared Kushner. (nytimes.com, July 10)

Of course, behind all the blather about “spreading freedom and democracy” and “humanitarian wars,” the main goal of the Pentagon has always been to enable Wall Street to extract huge profits from every corner of the globe. The military-industrial complex has for many decades amassed huge fortunes from taxpayer-funded contracts. Nations and communities from Afghanistan to Iraq, from Nicaragua to Vietnam, from Syria to Yemen have endured wave after wave of terrible attacks from Washington’s war machine, whether directly or through proxy war.

But by reducing the righteous punishment for these Blackwater hired killers and calling for a huge increase in their usage, Boss Trump and the ruling class he serves are signaling that they are ready to adapt even more vicious methods to try to reverse their losing fortunes in these conflicts — even at the cost of revealing the true aims of U.S. imperialism.