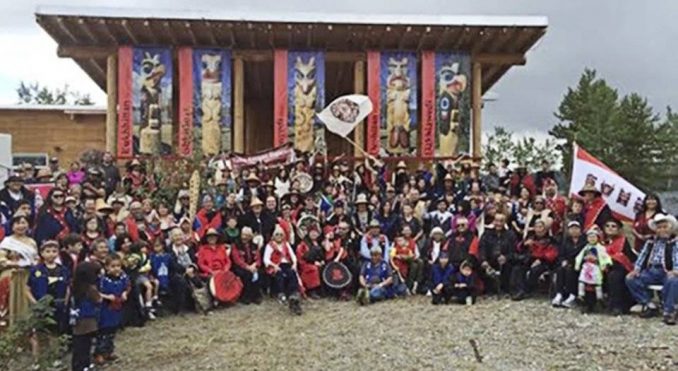 Elders of the Interior Tlingit met in 2005 and decided this tradition must be revived as a response to many decades of attacks on their culture, language — and their very existence as a nation. Since then, they have held Haa Kusteeyi every two years to avoid impinging on the celebration the coastal Tlingit have held since 1982 in Juneau, the capital of Alaska.

The first day of the Haa Kusteeyi celebration, at the Teslin Tlingit Heritage Center, emphasized the importance of using Lingit, the language of the Tlingit. There were treasure hunts, canoe rides, hand games, moose calling and soap-berry making, along with workshops. July 27 ended with a feast of moose stew and bannock, followed by a concert with Digawolf, a band rooted in the Tlicho First Nation of the Northwest Territories.

The July 28 welcoming ceremony on the shores of Teslin Lake re-enacted the historic start of Haa Kusteeyi. Afterwards, the barbecue crew began roasting moose for the evening feast. Then women and men in their beautiful garments explained how these were made and who did the work.

The day’s main event was the Grand Entry Parade. A few hundred Tlingit dressed in traditional regalia marched into the main hall, chanting and dancing. After that, it was time for welcoming speeches.

Elder Pearl Keenan, speaking both in English and Lingit, began with an invocation, mentioning the Tlingit delegations from Sitka and Juneau in Alaska and from Atlin, Carcross and Whitehorse in the Yukon. She stressed that the purpose of the celebration was to “become strong with our culture and nation.”

Events on July 29 included canoe rides and races. That night people feasted on salmon donated by the Tlingit community of Taku River, over the mountains to the west of Teslin. Some of the salmon were filleted in a competition and smoked in a traditional smoke house on the community center grounds. Workshops, music and other entertainment were free for all.

The Tlingit First Nation of the Yukon sought to develop and deepen the culture of their nation and show it to a broad North American community. And that they did. (tinyurl.com/y7xe2olr)

It’s important to take note of this history: The Tlingit people lived in the Pacific Northwest for thousands of years. European colonialists and then U.S. invaders searching for riches militarily displaced many Indigenous people from their ancestral lands. The U.S. established formal occupation through the 1867 Treaty of Purchase of Alaska. U.S. economic and political domination followed and then statehood.

The Inland Tlingit in the Yukon were descendants of people who moved there from Alaska’s coast, joining other First Nation peoples. European and U.S. incursions sought furs and gold there. Hudson’s Bay Company set up the first colonialist government and then Canada took over. In 1995, after 20 years of negotiations with the Canadian and Yukon governments, the Teslin Tlingit Council Final and Self-Government agreements were enacted.