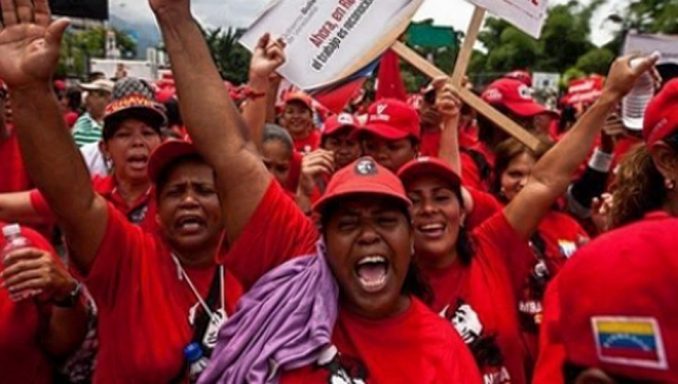 Chanting “The people united will never be defeated,” a huge crowd accompanied the 545 delegates elected to Venezuela’s new National Constituent Assembly as they made their way to the Legislative Palace in Caracas on Aug. 4.

They carried pictures of Venezuela’s two great liberators, Simón Bolívar and Hugo Chávez, which they put back in the Assembly hall. The right-wing opposition, MUD, had removed them when they took office in January 2016. As the delegates entered the building, they chanted “Volvió, volvió, volvió”

(“Returned, returned, returned”). It was the same slogan the masses had shouted when they brought Chávez back from having been kidnapped, after the failure of a right-wing coup on April 13, 2002.

Their destination was the Elliptical Room, which from now on will be the headquarters for the NCA, which cancels out the previous National Assembly. That body had had an opposition majority and had been in contempt of the Constitution since its very beginning, when it illegally swore in several assemblymen who had not been validated by a popular vote.

The NCA assumed its duties by electing the main leadership body that will help guide its work and will last for two years. By unanimity, Delcy Rodríguez, the previously combative exterior minister, was elected president. Aristóbulo Istúriz and Isaías Rodríguez became first and second vice president, in that order. Fidel Vasquez was elected as secretary and Carolis Pérez as sub-secretary. This NCA has a large representation of youth; in fact, 60 percent of its members are age 35 or younger. The size of the assembly is also noteworthy. While the NCA elected in 1999 had 135 delegates, this one has 545, representing the great diversity of the population.

It is important to remember that in this recent unprecedented election, more than 8 million Venezuelans voted, risking their lives in the middle of a counterrevolutionary war. The nine main goals of this NCA are:

It is also important to highlight that not all the 8 million voters were poor and Chavistas. In fact, many were from the middle class courted by the opposition. They voted to implement the NCA because they did not want any more murderous street barricades and killings.

This NCA now has the people’s mandate to solve the critical situation in their country, addressing above all the war by the counterrevolutionary opposition, which has been expressed in violent fascist and terroristic actions in the streets as well as in a dire economic war through enormous increased prices of basic products and other anti-people maneuvers.

While the NCA will engage the people throughout the nation in discussions on these topics, it can also take immediate action on crucial and urgent situations affecting the people and the country. In Venezuela, the power resides in the people, who can change and reform the current Constitution of 1999 in order to secure their country’s stability and a better future.

Immediate action was taken on the first NCA’s working session on Aug. 5, when it removed Attorney General Luisa Ortega Díaz from her post and replaced her with Tarek William Saab, who until then had been the head of the Citizen Power. This is an entity to which belong the public advocate, the attorney general (Public Ministry) and the general comptroller, who work to guarantee citizens’ rights and ethical conduct in government.

Ortega Díaz was removed after the Venezuelan Supreme Court of Justice initiated an investigation of alleged serious offenses during her mandate. Even more important, for several months she had shielded those on the right from prosecution for their terrorist actions.

The Public Ministry is the independent body in charge of establishing the criteria for political or criminal prosecution within the state and is under the jurisdiction of the Citizen Power. But it failed to find cause for judicial action against the violent counterrevolutionaries, and Ortega Díaz publicly sided with it by denouncing — without any real base — the Venezuelan government. She accused it of acting outside the constitutional framework while she ignored the terrorist actions of the right wing.

To further the investigation of violent acts, a Truth Commission was set up on the second day of the NCA sessions on Aug. 6.

The days following the July 30 elections have been the most peaceful since April. The counterrevolutionaries have received the message given by the voters, and demoralization has spread to their base. The right has lost its capacity to call people into the streets. Even the opposition media can’t hide the poor attendance to their calls — less than a dozen people could be seen in pictures of several of their rallies.

However, by no means is the Bolivarian Revolution out of danger. The victory of the Bolivarian people has meant greater external interference. The hostile media campaign of disinformation against the revolution and the pressure headed by the imperialist United States has pushed 15 countries into declaring that they will not recognize the NCA, among them Colombia, Mexico, Panama, Peru, Argentina and Brazil.

Even the Vatican, which has been vocal in some human rights issues in Latin America, has demanded that the NCA be suspended. Organizations like the European Union, Organization of American States, the Carter Center and Mercosur also joined this bandwagon. Mercosur held an emergency meeting to suspend Venezuela from membership, charging it with the “rupture of the democratic order” — the accusation made by all those opposed to the NCA. It is interesting that the countries making that charge are themselves prime examples of human rights violators who carry out undemocratic processes and policies against their peoples.

At dawn on Aug. 6, a mercenary group dressed in uniforms of the Bolivarian National Armed Forces attacked Fort Paramacay in Valencia, Carabobo State, near Caracas. It was immediately repulsed by the real army, which issued a public statement telling the Venezuelan people and the world that the Bolivarian military is at the loyal service of the revolution. The head of this paramilitary group was a low-ranking ex-officer who had been expelled from the BNAF because of treason and was living in Miami, Fla. The rest were paid civilians.

This is by no means accidental. It is a well-known fact that the U.S. hosts many Latin American counterrevolutionaries, as the history of Cuba amply can attest. Was this Carabobo action directed by the U.S. State Department? It would be no surprise. In fact, the State Department released a statement on Aug. 3 condemning the NCA. Its head, former ExxonMobil executive Rex áTillerson, said: “We are evaluating all our policy options (as) to what we can do to create a change of conditions, where either Maduro decides he does not have a future and wants to leave on his own accord, or we can return the government processes back to the constitution.” (state.gov)

The U.S. also funds the opposition through several channels. It is clear that U.S. dollars are funding violence against the people of Venezuela in the name of “democracy.”

Now more than ever, the international progressive movement needs to strongly and urgently defend the Bolivarian Revolution, regardless of whether they are in complete agreement or not with President Nicolás Maduro. It is not about defending one person, but defending a peoples’ revolutionary process that, if defeated, would be replaced by the most vicious regime of fascist and terroristic forces. The examples are many, but just one is enough: Chile under Pinochet.