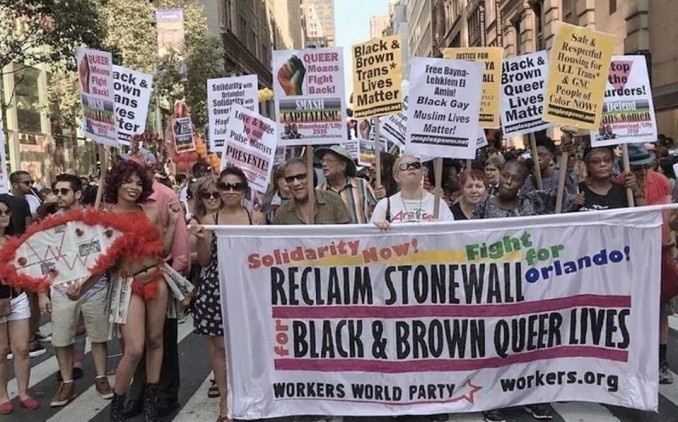 The Trump administration’s bigotry was blasted at LGBTQ people on July 26 when the president tweeted in early morning that he was barring transgender individuals from the U.S. Armed Forces. Later in the day Attorney General Jeff Sessions and his Department of “Justice” issued a legal brief arguing that employers could discriminate against LGBTQ workers.

These attacks could result in over 15,000 people being expelled from the U.S. military and in LGBTQ people no longer having protection in housing, education or jobs. Until now this protection has been interpreted as covered by the Fair Housing Act and the 1964 Civil Rights Act, Title VII and Title IX.

But we’ve already had an avalanche of virulently anti-LGBTQ action by this administration during the last six months. Hours after Trump’s inauguration, all mention of LGBTQ issues was erased from the White House website. Hundreds of millions in funding have been slashed from government initiatives to help people with HIV and AIDS. LGBTQ people have been excluded from government data collection, including the U.S. Census Bureau, blocking documentation of the need for funding and support. Title IX protections for trans students in schools have been rolled back.

In a stand similar to that of Pence when he was governor of Indiana, Sessions as a U.S. senator supported a constitutional ban on same-sex marriage, voted against workplace protections for LGBTQ people, voted to keep the U.S. military’s “don’t ask, don’t tell” anti-gay policy and twice voted against expanding hate crimes to include attacks based on sexual orientation and gender identity.

The most obvious engine for the rabid anti-LGBTQ actions of Pence and Sessions is their shared commitment to “Christian nationalism,” a far-right ideology with a U.S. history of violent racism against ­African Americans, virulent anti-Semitism, persecution of women who reject patriarchal rule and a sentence of damnation to LGBTQ people. (Washington Post, July 4) In this belief system, the U.S. was founded as a “Christian” nation, and only those believers deserve full citizenship.

This far-right, near-fascist ideology of Trump, Pence and Sessions is a resurgence of earlier death-dealing campaigns against immigrants, African American and other people of color, workers, rebellious women and others criminalized as sex and gender outlaws. One such campaign was carried out by the Ku Klux Klan in the 1920s, which dominated U.S. politics in that era. That campaign, funded and sanctioned by big business, was put in motion to break up any working-class unity among new immigrants, African Americans fleeing oppression in the U.S. South and newly industrialized “native-born” workers.

It’s hard to remember, but Trump literally wrapped himself in the LGBTQ rainbow flag during his presidential campaign at a rally in Colorado. But his only promise to LGBTQ people, made as he accepted the Republican presidential nomination, was to “protect” them against the “foreign ideology” — of Islam.

LGBTQ people in the U.S. are multinational, multigendered and overwhelmingly workers — whether employed or desperately needing work. The only way LGBTQ people will get the safety, work, health care, housing and education they need is through solidarity with other oppressed people and with their class — the multinational working class — together on the path toward socialism.