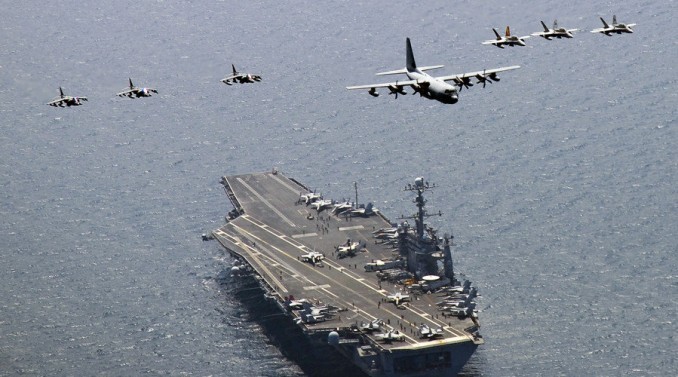 U.S. Marine Corps aircraft and jets over the aircraft carrier USS George Washington in the East Sea of Korea.

A new round of harsher, economically disruptive U.S. sanctions against Russia, Iran and People’s Korea has met with anger, even from traditional U.S. allies. The denunciations expose both the growing isolation and the increased military threat coming from U.S. imperialism. The raw display of power by the White House, Congress and the Pentagon is raising tensions on an international scale.

The U.S. House of Representatives on July 25, in an almost unanimous vote — 419 to 3 — confirmed just how bipartisan both Republican and Democratic politicians are when it comes to U.S. aggression. The bill was similar to one passed on June 17 by the Senate, in which Republicans and Democrats joined forces to approve, by 98 to 2, a sweeping sanctions bill that punishes companies doing business with Iran and Russia through an array of financial penalties.

Both bills would require a congressional review of any attempts to ease or end the imposed restrictions. This is considered an extremely unlikely possibility.

Immediately, editorials in the Washington Post and the New York Times praised the sanctions votes, confirming the aggressive stance of major forces within the ruling class.

The same House, including Republicans and most Democrats, voted 344-81 to approve the largest military appropriations bill in U.S. or world history.

The National Defense Authorization Act would allocate $696 billion for “defense” spending in fiscal year 2018. That far exceeds even Trump’s  $603 billion budget proposal, which has been described as a “historic increase in defense spending.”

Yet this monstrous, bankrupting allocation of funds quietly sailed through Congress almost unreported, while media attention focused on Democratic Party grandstanding to preserve the meager provisions of the Affordable Care Act.

This military budget far exceeds long-standing caps on “defense” spending in Congress. Since 2011, spending had been capped at $549 billion. The cap, however, was regularly violated with supplementary budgets.

All the politicians know that, even without Trump’s appointees wreaking havoc on social, environmental and infrastructure programs, the latest military appropriation requires deadly cuts in all other government programs in order to balance the budget.

The ascendency of military options, war threats and a wildly inflated military budget was made clear when Trump named former four-star Marine Corp Gen. John Kelly to serve as White House Chief of Staff. Gen. Kelly had earlier been named by Trump to the powerful position of Secretary of Homeland Security. Before that, he headed the U.S. Southern Command, in charge of military operations in 32 countries in the Caribbean, Central America and South America,

Gen. Kelly will be the first general to fill the post of White House chief of staff since Alexander Haig took over in the final stretch of the hated Nixon administration.

The corporate media were again unanimous in their praise. The New York Times lauded Kelly as a “beacon of discipline.”

Sanctions are a form of war

Economic sanctions are a violent war option of powerful countries against rivals that are economically weaker. Such sanctions seek to create shortages, wild inflation, hunger, unemployment, economic dislocation and shutdowns in vital industries by suddenly restricting credits, loans and trade.

Sanctions lay bare the real relations under capitalism. Capitalist competition is intended to shut down competing industries and drive out rivals.

It is an illusion that capitalism creates prosperity or democratic participation. Capitalism historically has expanded through war, theft, rape and pillage. Creating artificial shortages and sabotaging production are also business as usual.

The U.S. has used starvation and disease against Indigenous nations since its founding. But with U.S. global dominance since World War II, the imperialists here have sought to involve other imperialist forces.

For decades there were concerted efforts to strangle the USSR with trade restrictions. After the collapse of the Soviet Union, U.S. imperialism colluded with the European Union and monarchies of the Gulf States to economically strangle Iraq, Iran, Libya and Syria. Such coordination meant the sanctions were imposed through the United Nations, forcing all nations to comply or face economic isolation.

The European Union is a collaborator with the U.S. in looting the developing and formerly colonized countries. But it is also an economic rival in a world of shrinking markets and commodity surpluses.

U.S. imperialism’s global economic position is slipping. As a major oil exporter, much of it based on environmentally destructive fracking, it must find major markets.

Capitalist crisis is the essential issue behind the charges of Russian “hacking,” Iran’s nuclear energy program and the DPRK’s efforts to defend itself against U.S. nuclear threats.

This new set of sanctions imposed by the U.S. will wreak havoc on European energy companies and the banks that contracted to finance the complex construction plans to pipe in gas and oil from Russia.

Past sanctions were carefully calibrated between the United States and its European allies to keep everyone on board and preserve a united response against a targeted country. Those days are now past.

The new bill would allow the U.S. to sanction any company involved in the maintenance or development of Russia’s energy export pipelines. That could cripple the construction of Nord Stream 2, a colossal natural gas pipeline planned to pump Russian gas to Germany beneath the Baltic Sea. The project is owned by Russian energy giant Gazprom and financed by European investors. It will affect other major natural gas projects out of the Baltic states.

The new sanctions target any company that contributes to the development, maintenance or modernization of Russia’s energy export pipelines. They add punishments against Russian and EU energy, financial, rail, shipping, and metals and mining sectors.

Sanctions could also undermine partnerships between EU and Russian firms to develop offshore energy projects in Egypt. And they could prevent Italian and Russian companies from working together on the so-called Southern Gas Corridor, which would go through Turkey to southern EU states.

According to Iranian Minister of Petroleum Bijan Zanganeh: “The pace of growth in Iran’s crude oil production and exports has amazed international observers who did not think Iran could raise its production by 1 million barrels per day within three to four months after the removal of sanctions.” (iran-daily.com, April 3)

Abbas Araqchi, the Iranian deputy foreign minister for legal and international affairs, said the “hostile” move with new sanctions amounted to a breach of the P5+1 nuclear deal of 2015 between Iran and the six world powers — the U.S., Britain, France, Russia, China and Germany.

The overwhelmingly bipartisan sanctions votes in the Senate and House are a sign to U.S. allies that U.S. oil and gas companies are determined to shut down other suppliers in order to market U.S. supplies. Economic and military confrontation to back this up is escalating.

On the same day, July 25, as the sanctions vote in the House, a U.S. Navy ship fired warning shots at an Iranian vessel in the Persian Gulf. U.S. officials said it was the first such incident since President Donald Trump took office in January.

The congressional votes brought howls of denunciation from U.S. allies like Germany, Austria, France and South Korea, along with the targeted countries themselves.

A leaked European Union memo reported that European Commission Chief Executive Jean-Claude Juncker said the EU “should stand ready to act within days” of the bill’s passage, and that the sanctions “could impact a potentially large number of European companies doing legitimate business under EU measures with Russian entities.” A senior EU official said that the European commissioners were united in their views. (Financial Times, July 27)

The EU could impose outright bans on doing business with certain U.S. companies. “If our concerns are not taken into account sufficiently, we stand ready to act appropriately within a matter of days. ‘America First’ cannot mean that Europe’s interests come last,” said Juncker.

Suddenly these European imperialist powers, complicit in past U.S. sanction wars, are citing the illegality of sanctions in international law. The EU supported starvation sanctions on Iraq from 1990 until the U.S. invasion and occupation in 2003. Since that year, they have supported harsh sanctions on Syria that continue today.

The same article reported that several European countries, in an unprecedented move, issued a joint statement invoking sovereignty: “Europe’s energy supply is a matter for Europe, and not for the United States of America.”

France has raised doubts about the legitimacy of new U.S. sanctions against Iran and Russia, saying they do not conform to international law, due to their extraterritorial reach. (presstv.com, July 26)

Reuters of July 27 had two articles: In one Russian President Vladimir Putin described the bill as an attempt to safeguard U.S. geopolitical interests at the expense of its allies. In the other, an influential industry association in Germany accused the U.S. of aiming to improve its liquid gas exports to Europe through sanctions.

New, harsher sanctions on the Democratic People’s Republic of Korea in the north are intended to sabotage any lessening of tensions within the Korean peninsula.

In mid-July the newly elected south Korean government of President Moon Jae In proposed military talks with the DPRK in its first formal overture to the north. The proposal was to discuss ways to avoid hostile acts near the heavily militarized DMZ border. Moon proposed that hostile military activities at the border be ended on July 27, the anniversary of the 1953 armistice agreement ending the Korean War.

The south Korean defense ministry proposed talks with the north on July 21 at Tongilgak to stop all activities that fuel tension at the military demarcation line.

The U.S. response was to announce that it is preparing new sanctions on Chinese banks and firms doing any business with People’s Korea.

The U.S. Air Force flew B-1B bombers over the Korean Peninsula, accompanied by South Korean and Japanese jet fighters, as a provocation on July 30.

The Wall Street Journal on July 24 reported on preparations by China in the event of a U.S. war against the DPRK. China also staged joint military operations with Russia in the Baltic Sea.

The threats against past U.S. allies as well as the escalation of threats on every targeted country, from Venezuela to Iran, to Syria, to the DPRK, and increasingly toward Russia and China, reflect a growing desperation in U.S. ruling circles.

While the global position of U.S. corporations and banks is shrinking, the influence of the generals over the White House and the sheer size of the U.S. military machine are growing. This is a danger to all humanity.