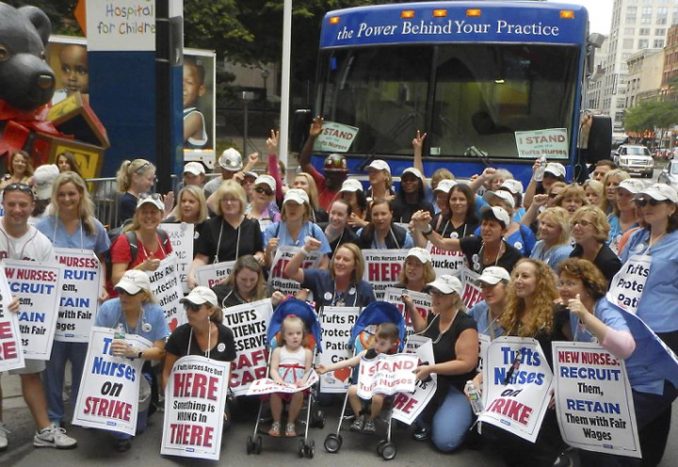 Hundreds of cheering nurses streamed into the lobby of Boston’s Tufts Medical Center at 7 a.m. on July 17, wearing “Safe Patient Limits Save Lives” buttons on their scrubs and carrying “Tufts RNs: Protecting Patient Care” signs. They were reporting to work after being illegally locked out for four days, following a courageous 24-hour strike.

This historic strike by union members began on the morning of July 12, as overnight, third-shift Tufts nurses emerged from the hospital’s front doors to join co-workers on spirited picket lines. It was the first nurses’ strike in Boston since 1986.

Ninety-five percent of MNA members had voted to strike. They organized picket lines in response to Tufts’ refusal to address unsafe hospital staffing practices and improve its pay and benefits offer during over 30 contract negotiation sessions. Tufts nurses had worked for 14 months without a contract.

Boston’s corporate media tried to paint the MNA nurses as “greedy” for defending quality patient care and cost-saving, fixed-benefit pensions. In vain, they attempted to foment anti-union public sentiment and fabricate a basis for police repression by blaming and sensationalizing creative attempts to keep scabs away.

Delegations of Boston’s Workers World Party, labor union and youth militants took shifts on the picket lines. Additionally, strikers’ families, neighbors, former patients and many others supported the strike. The Washington Street underpass that runs through the downtown medical center teemed day and night with honking vehicles and resonated with chants in solidarity.

This support grew daily until even Boston Mayor Marty Walsh had to step back from his accusations at the strike’s outset that the nurses had contributed to a situation where “patients will lose care.”

Rank-and-file nurses and their allies transformed the lockout into a four-day street meeting on working-class solidarity in the age of health care cutbacks.

“Every strike in this city in the last few years has been about health care,” said Ed Childs, of WWP and UNITE HERE Local 26. “It’s the number one issue for workers.”

Tufts patients, whose lives were saved by Tufts nurses, spoke about the need to fight for quality health care: “They are crying ‘the hospital doesn’t have enough money!’ while they give it all to a few people at the top,” said the angry spouse of a Tufts patient.

Tufts CEO Michael Wagner takes home an annual salary of over $1 million, not counting bonuses. But pay for nurses at Tufts is the lowest in the city. They make only 87 percent of what nurses are paid elsewhere in Boston. This exploitation is compounded by patient-to-staff ratios that are among the highest in Boston.

At the bargaining table, Tufts management has deceptively argued that the hospital needs to “operate lean” in the face of the uncertainty given the Trump administration’s attack on the Affordable Care Act. In a city known for its top-notch research hospitals, Tufts receives a relatively low reimbursement rate from insurers.

But rather than fighting back against Washington and the insurance industry to ensure access to quality care for all, Tufts is trying to pass this burden on to the nurses in an austerity package.

Tufts squandered over $6 million on rotten anti-strike tactics: an illegal lockout, coupled with costly scab labor. While pouring money into out-of-state strikebreakers and police, Tufts then used these expenses as a bogus justification for locking out the nurses.

But, as MNA leaflets explained, hiring scabs isn’t just expensive and unnecessary — it’s life-threatening to patients. Multiple cases of patient safety problems were reported during the lockout. Tufts dismissed at least one scab for incompetence.

By bringing in 350 strikebreakers to do the work of 1,200 trained, dedicated, full-time nurses, Tufts management used patients’ lives as a bargaining chip. Clearly, the bosses don’t care who gets hurt as long as they can try to force concessions from workers.

Nurses say they expect negotiations to resume soon, but as of this writing no timetable has been publicized. Whether or not an agreement will be reached that meets the nurses’ demands is unknown. But the broad multinational working- class solidarity that was palpable in Boston over the last week will be important as bigger battles over health care are coming.