Sometimes a revolutionary party has to flip its tactics 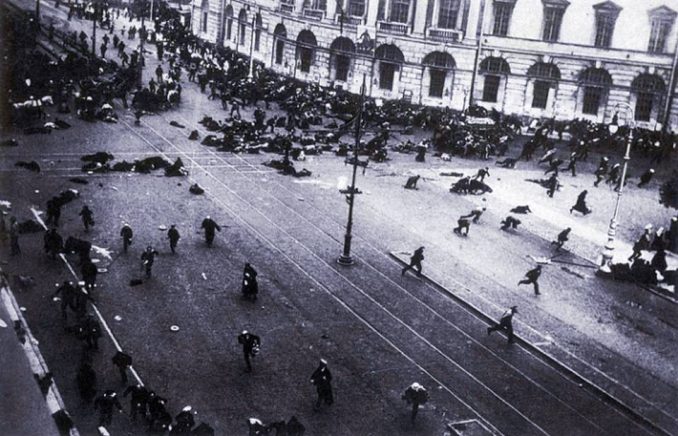 Workers and soldiers take cover — or fall shot — after hidden snipers fire on the July Days protest in Petrograd, July 17, 1917, at the Nevsky Prospect.

On July 16 a hundred years ago, about four months after deposing the Russian czar and four months before making the world’s first socialist revolution, tens of thousands of workers and soldiers in Petrograd (St. Petersburg) grabbed their rifles and machine guns to march on the headquarters of the Soviet (Council) and demand that the workers’ parties take power away from the pro-capitalist ­government.

To do this, these workers and soldiers had to defy not only the government, which refused to end Russia’s participation in World War I. They had to defy the workers’ and peasants’ parties in the Soviet that had submitted to capitalist rule. And they even had to challenge the Central Committee of the most revolutionary workers’ party in the world at that time, the Bolsheviks.

The Bolshevik leaders had asked that there be no demonstration. Despite this, the Putilov factory workers and their armed Red Guard, the Machine Gun Regiments of the Petrograd garrison and other units that had made the February revolution and later came over to the Bolsheviks, plus the fiery sailors of the nearby Kronstadt island base — all were ready to march with their arms and go all the way.

At least that was their will. But they didn’t have step-by-step plans for how to do it. They were on the march to demand that the Soviet take power from the capitalists. Or, as one of the thousands of angry workers yelled to a leader of the Social Revolutionary Party, Victor Chernov: “Take the power, you S.O.B., when they give it to you.”

This important episode in the Russian Revolution, known as the July Days, is significant for the way it illustrates the uneven, spontaneous and even chaotic development that a revolutionary process can take. The best workers’ party then in existence, one in close contact with the class it represented, was unable to control the ebb and flow of the battle.

The Bolshevik leadership’s cool evaluation was that while in Petrograd itself they might have sufficient support to take and hold power, that was not true elsewhere in Russia. Yet they still had to answer to the hot, revolutionary fervor of their most ardent supporters among the workers, the soldiers and sailors in and around Petrograd.

The Bolshevik leaders had to flip their position at the last minute. They did this to avoid disappointment, disillusionment and discouragement among their supporters or, worse, to leave them disorganized and vulnerable to reactionary attack.

Following the uprising in the winter that overthrew the Russian monarchy and nobility, two separate centers of power replaced Czar Nicholas’s rule. One was the Provisional Government, where the pro-capitalist parties took the lead and collaborated with the remnants of the old czarist state — the bureaucracy, the police and courts, and the regular army generals. The Provisional Government acted as the center of capitalist power.

The other center was the Petrograd Soviet, an elected body in which the main parties represented the peasants, workers and soldiers. At the time the czar was deposed, none of these poor-people parties, not even the Bolsheviks, had a program calling for a socialist revolution in Russia. By June, however, Bolshevik demonstrations were calling for “All power to the Soviets!” but mainly as agitation to gradually build support.

The Provisional Government was formed from the old parliament, which had been powerless when the monarchy existed. Its leader was Alexander Kerensky, a lawyer who became Russia’s war minister. Kerensky faced a great dilemma: Either he must break with the masses — who wanted to end Russia’s participation in the war — or he must break with the capitalists and Russia’s imperialist allies in France and Britain — who wanted Russia to keep fighting Germany and Austria-Hungary.

On July 1, Kerensky made his decision. He broke with the Russian masses when he ordered Russian troops to go on the offensive against Austrian lines to capture the city of Lvov, in what is now western Ukraine. The broad Russian offensive disintegrated within five days, eventually collapsing before a counteroffensive. It cost 400,000 casualties on the Russian side.

This military disaster won even more support within the army for the Bolsheviks and their leader, V.I. Lenin. It was the only party in the Soviets that promised over and over that it would end Russia’s participation in the war.

The Petrograd garrison, to whom war meant death, exploded against Kerensky’s offensive. The Putilov munition workers were also angry, armed, organized and pro-Bolshevik. The Kronstadt sailors, for their part, had been ready since March to demand that the Soviet take state power and end the war.

Raskolnikov (F. F. Ilyin), a 25-year-old sailor who was a Bolshevik leader in Kronstadt, wrote in his memoir that in the eyes of the Russian capitalist class: “Kronstadt was a symbol of savage horror, the devil incarnate, a terrifying specter of anarchy, a nightmare rebirth of the Paris Commune on Russian soil.” In contrast, for the workers, soldiers and peasants “Kronstadt in 1917 was the impregnable citadel of the revolution … the vanguard of the revolution.”

Raskolnikov added that the total number of sympathizers with the Bolshevik Party at that time in Kronstadt reached 35,000, with 3,000 formal party members.

The Bolshevik central leadership was often in the unenviable position of having to hold back the Kronstadt sailors until the rest of the country — or at least the rest of Petrograd — caught up.

One can only imagine Raskolnikov’s turmoil that July 16 when his orders from Bolshevik headquarters were to avoid bringing the Kronstadt sailors to the demonstration in Petrograd. From the other side, he faced thousands of sailor comrades demanding the Bolsheviks authorize the demonstration and distribute arms. Add to this a few anarchist agitators who chided the Bolsheviks for being “sellouts,” and you can feel his frustration.

Though he believed in party discipline, Raskolnikov argued with the Bolshevik leaders. He said that the armed demonstration was inevitable. Their only choice was stand with it or stand aside.

At Bolshevik headquarters — a small palace formerly occupied by a ballet star who had been the czar’s lover — the central committee was also beseeched and partly besieged by the Machine Gun Regiment, which was also demanding authorization for an armed demonstration.

The leaders rediscussed their decision, then authorized the demonstration (one can almost hear Raskolnikov’s sigh of relief on the phone). Still they tried to cool it down, make it peaceful.

The highpoint of the demonstration was on July 17 when 10,000 armed sailors joined the march through Petrograd. There was sporadic fighting as unidentified reactionaries fired on the masses from hiding. In what every account described as chaotic, the armed but untrained demonstrators fired back.

By the third day, forces still obeying orders of the Kerensky government were arresting Kronstadt sailors and Bolshevik leaders. The government, which really knew better, cast the Bolsheviks as “German agents,” especially Lenin, since he had arranged with German imperialism in April to let him ride on a sealed train from Switzerland through Germany to Russia.

The Bolsheviks had not called out the protest, but they stayed in the streets with the masses, signed a “ceasefire” truce with the government and organized an orderly retreat when the government broke the agreement. The sailors, for the most part, made it back to Kronstadt, the soldiers to their regiments and the Putilov workers back to the factory.

All the Bolshevik leaders, including Raskolnikov and his comrade Semyon Roshal from Kronstadt, Leon Trotsky and others, were sent to prison. Lenin and Zinoviev fled to Finland, where they stayed in hiding for fear of assassination. The Bolshevik headquarters was seized.

The Bolsheviks’ real crime, of course, was not that they served the German Kaiser, but that they stood up with the revolutionary proletariat in Russia instead of abandoning them.

After a month, another turn in the course of the Russian Revolution reversed this partial defeat and most of the leaders were freed. That gave the Bolsheviks another chance to show, under greatly improved conditions, that any hesitation on their part in July was merely tactical. Just months later they led an insurrection that created the first workers’ state and showed that a successful revolution needs both a disciplined leadership and a mass uprising.

Catalinotto wrote this article based on quotes and outtakes from his book, “Turn the Guns Around: Mutinies, Soldier Revolts and Revolution,” which included research from Raskolnikov’s “Kronstadt and Petrograd in 1917,” Leon Trotsky’s “History of the Russian Revolution” and Nikolai Sukhanov’s “The Russian Revolution 1917.”