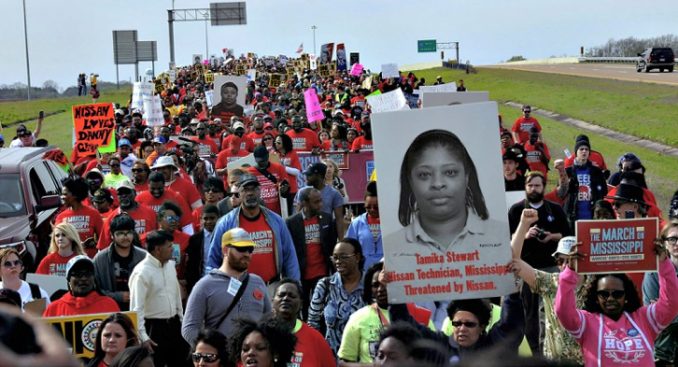 In a historic action on July 10, workers at the Canton, Miss., Nissan automobile manufacturing plant filed a petition with the National Labor Relations Board for a union recognition election with the United Auto Workers union.

The plant is one of the largest automobile plants in the U.S. South, with 6,400 workers. Eligible voters in the election are Nissan production technicians and maintenance workers totaling around 3,800. The overwhelming majority of workers at the Canton facility are African American.

Most auto workers in the South are not represented by unions. A few facilities for companies like Freightliner, Ford, General Motors, Chrysler and other smaller parts plants in the region are organized. But automakers — including Honda, Hyundai, Kia, Mercedes-Benz, Nissan, Toyota and Volkswagen — are building factories in this region because of generous state and local incentives, right-to-work (for less!) laws and state governments eager to publicly oppose unions.

Business interests want the plants free of union organizing that builds worker solidarity and counteracts the brutal racism and continued inequalities left from the history of enslavement and Jim Crow segregation of African Americans in the South.

If the union wins the election, the Mississippi plant will be the first “foreign transplant” facility to be fully unionized. At the Volkswagen plant in Chattanooga, Tenn., the UAW only represents skilled trades workers, a small minority of the total workforce. VW is still refusing to recognize them as a bargaining unit.

With the exception of two Honda plants in rural Ohio, every U.S. auto transplant factory is in the South. A union victory at Nissan will boost organizing efforts at all of these plants.

Winning at Nissan will also put the UAW in a stronger bargaining position with GM, Ford and Fiat Chrysler at the national level. These companies typically use competitive pressure from the transplants as a club to force concessions from UAW members who work at the Detroit Three.

While the Mississippi workers are hoping the union will help them fight the expansion of the lower-paid temporary workforce in the Nissan plant, the recent contracts for UAW-represented autoworkers in other regions have allowed the bosses to hire more temporary workers, who are paid less and have fewer benefits.

It is imperative for every autoworker, inside and outside the U.S., to be in solidarity with the Mississippi Nissan workers. But this solidarity must be free of the chauvinistic, anti-Japanese, “buy American” rhetoric that the UAW has employed in the past.

Organizing at the Mississippi plant has been going on for over 12 years. On March 4, there was a mass, community-worker “March on Mississippi: Workers’ Rights = Civil Rights.” Several hundred people gathered in Canton to draw public attention to this struggle, including actor Danny Glover, U.S. Sen. Bernie Sanders and Clarence Thomas, former officer of Bay Area dockworkers’ International Longshore and Warehouse Union Local 10, spark of the 1934 West Coast General Strike.

The marchers demanded that Nissan respect employees’ right to vote for a union without fear of retaliation.

In an interview with Workers World, Ernest Whitfield, a 13-year employee and press operator in the Canton plant, was clear: “We state that workers rights are civil rights. Right now our state and federal rights to have a fair vote is being threatened and suppressed.”

Whitfield added, “The tactics that they are using is nothing short of what they were doing in the 1950’s and 1960’s as voter suppression and intimidation against Black people. That is why we link workers rights with civil rights. This is an 80 to 85 percent African-American plant.”

By Tuesday, July 11, company intimidation of the workers had already started. “This week there has been a difference in the plant,” said Whitfield. “Some of management’s reaction has been a Mr. Nice Guy role: come out on the line, asking if there is enough air, because usually it is pretty hot. They are catering to workers in an abnormal way.” Then on Wednesday, the plant manager, Steve Marsh, published an anti-union video.

The workers didn’t let those tactics go unnoticed. On Wednesday, July 12, a group of workers drove down to New Orleans to drop off a box of union cards at the local National Labor Relations Board, requesting they monitor and help with a free and fair election. On Thursday, July 13, two workers, Travis Parks and Eric Hearn, walked into the boss’s office at the Canton plant and delivered a letter to demand that they recognize and bargain with the UAW.

By Friday night, at shift change, workers were passing out union fliers to their co-workers at the turnstiles. Later on that night, supervisors brought out fliers listing so-called facts about the UAW to scare workers.

According to Whitfield: “It was typical playbook stuff from other anti-union campaigns. Our manager spoke directly about the election, saying that the temps were left out, stating that they will not be able to vote, but that is not the case.”

The union has been organizing workers in the temp agencies, and close to a majority in some have filled out union cards.

Out of the roughly 6,400 workers in the plant, over 2,600 are temps who work for contractor companies. The company hires workers through the temp agencies to keep the workers divided, in an attempt to weaken them and make it more difficult to organize.

Temporary agencies inside the Canton Nissan plant include Kelly Services, Minact Yates (with about 640 workers in plant) and Yates Services. There are also subcontractors under Kelly Services, including Onin and Excelsior Services.

According to Whitfield, “Contractors do the same work that we do. We work side-by-side with them in all job categories.” But there is a tiered system of pay and benefits.

Even for workers that are employed directly with Nissan there is a two tiered system, including a lower tier called “Pathway.” This is for former temps now hired by Nissan who are not offered the same health insurance, pay and other benefits as other Nissan employees. For instance, Nissan workers are offered a Healthcare Reimbursement Account (HRA)  with a $1,500 annual deductible, while Pathway workers are only offered a Healthcare Saving Account (HSA) with a $2,600 annual deductible.

‘Bring the weight of the community onto this plant’

The projected date for the union election is for the second week of August. The UAW is waiting on the NLRB to confirm the exact date.

“Our goal is to union the election and bring the union into the plant, regardless of tactics management is doing,” emphasized Whitfield. “We need to bring the weight of the community onto this plant. We are inviting social justice and civil rights and other community activists to let this management team know they need to back off these tactics. United we can win!”