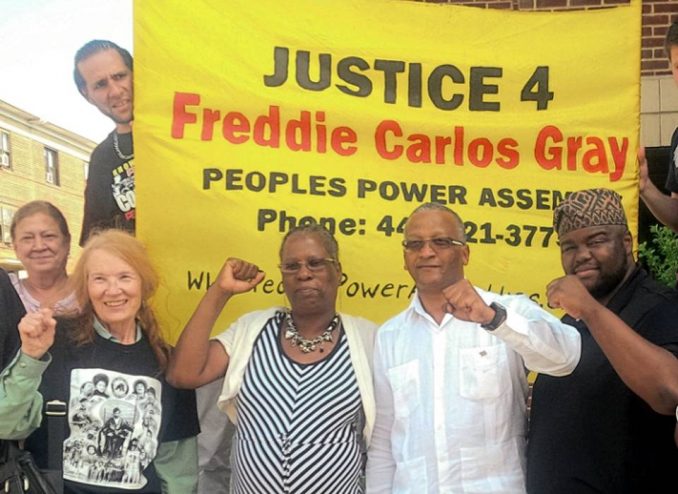 Victor Manuel Lemagne Sánchez, a high-ranking union leader representing workers in Cuba’s hotel and tourism industry and also an elected deputy in that country’s National Assembly of People’s Power, was greeted in Baltimore on July 10 by a packed meeting of enthusiastic community, youth and union activists.

President David McClure of the Amalgamated Transit Workers Local 1300 opened the meeting by welcoming everyone to the union hall. He described some of the struggles his membership is engaged in, along with bus riders in Baltimore.

Lemagne Sánchez presented an in-depth slide presentation on the U.S. blockade of Cuba and also shared some impressions of his coast-to-coast trip meeting union members in the United States. He explained how one woman told him she had to pay $200,000 for open-heart surgery, while if she lived in Cuba she would receive medical care for free.

The next day, approximately 35 to 40 Baltimore union leaders met with Lemagne Sánchez in the large conference room of the Service Employees Union in downtown Baltimore. SEIU 1199 represents nursing home and hospital workers in the city, the largest being Johns Hopkins and Mount Sinai hospitals.

Of special significance is the fact that many of the labor leaders at the reception have led delegations to Cuba in the past, including Fred Mason and Mike Smith of the National Association of Letter Carriers.

It has been nearly 20 years since the last multicity visit of a Cuban labor representative. Brother Lemagne Sánchez stated that he was closing his 15-day tour of U.S. cities with “a golden stamp of approval” and that “it has been amazing to see the amount of people in Baltimore in solidarity with the Cuban Revolution. There has been a great exchange in terms of a working relationship with groups and organizations in both Cuba and the U.S.”

He added, to the applause of the audience, that Baltimore had been “the most attentive and exciting reception during my visit to the U.S.” The following day, he said, he would be returning to the National Assembly of People’s Power, Cuba’s legislative body, in which he participates as a delegate from the municipality of Trinidad.

Goals of the Central Union of Cuban Workers

Lemagne Sánchez narrated a slide presentation on the structure and functions of the Central Union of Cuban Workers (CTC) in which he emphasized the three major ongoing goals of the organization: (1) organizing the development of the economy and enhancing the productive capacity of the workers, (2) providing ideological education for the workers, and (3) increasing the role of women in unions and Cuban society in general.

He explained that there are 16 national unions in the CTC with more than 2.9 million workers. Of those, 2.7 million are employees of the state. Altogether, more than 90 percent of Cuban workers are organized in the CTC.

At the last congress of the CTC, its 20th, the two main resolutions discussed and passed were to mobilize the workers ideologically in the present stage of Cuban socialism, and to increase productivity with the goal of greater efficiency, along with an increased amount of autonomy and flexibility in the workplace. As an example, he cited the case of women workers who have to drop their children off at schools. The time they have to arrive at their workplaces was adjusted.

Immediately following the union luncheon, despite 106-degree weather, Lemagne Sánchez traveled with activists to the site where Freddie Gray was beaten and arrested by police before he died in 2015. The Rev. C.D. Witherspoon, who lives in the neighborhood, welcomed the Cuban unionist. Courtney Jenkins of the American Postal Workers Union and the Coalition of Black Trade Unionists explained that he grew up in this community.

Mike Smith from the National Association of Letter Carriers, who is also an official with the Baltimore Metropolitan AFL-CIO Council, explained that Freddie Gray’s sister was a member of his union. The group presented Lemagne Sánchez with a Peoples Power Assembly banner reading “Justice for Freddie Gray” that had been in the forefront of countless demonstrations during the period after Gray’s death.