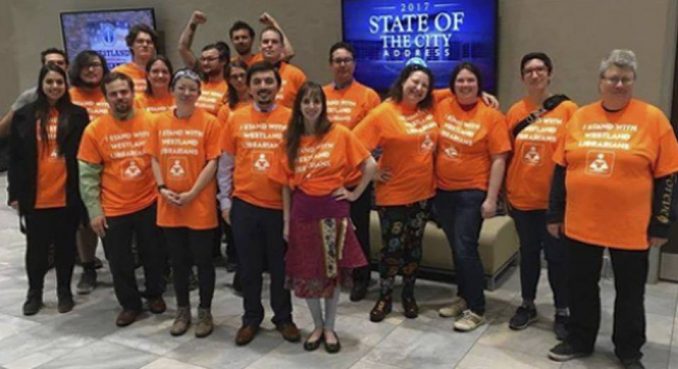 Westland, Mich. — Workers World newspaper recently interviewed one of the public employee librarians who won a fight for union representation in Westland, Mich., a suburb of beleaguered Detroit.

Workers World: Could you describe the Westland librarian struggle a bit?

Kristy Cooper: On March 3, five librarians were told their positions were terminated at the Westland Public Library, just two days after they had turned in union-intention papers. The library’s administration then hired three part-time “library associates,” with no benefits, to replace them. We later found out these people had the exact credentials as the terminated librarians — a master’s in library science. [The fired librarians] were not allowed to apply for these demoted positions. They were all initially told that they were laid off. But they were already budgeted-for because of a 10-year dedicated library millage passed by 71 percent in 2012, and the library has a $2.5 million fund balance. The library’s board president claimed that the timing of their terminations was a complete coincidence.

The fact that it was an election year helped us a lot [in the campaign]. I created surveys for everyone running for city council and mayor for them to talk about what was happening at the library. This was the first time someone was running against the mayor in years. He was the person who appointed the library board in the first place.

[Then] suddenly there was an article in the local paper about the library board hiring an independent counsel from the city, and I was about to release the survey results. The mayor got the remaining board members to resign. Then the director resigned right after that. The next day, all of the librarians were then offered their jobs back. They are currently negotiating the terms of their return with the library’s new union, the SEIU [Service Employees], voted in by 27 to 5 in May.

WW: How do you think the Westland librarian struggle ties into the broader working-class struggle?

KC: I think it shows how often and easily the work people do is undervalued and treated as disposable, even when everyone who actually knows what they are doing would agree they are doing a good job.

I think it also says a lot about how little [the library administration] cared about the library’s patrons. When the librarians were terminated, several programs aimed at older or more vulnerable members of the population had to be immediately canceled, including the homebound delivery program, the adult literacy program, the job-seekers lab, all teen programs, all computer classes and the writing groups.

It also showed how little the Democratic Party actually cares about labor issues. Westland is run by Democrats and only two people from the Westland Democrat Club actually got involved to help us.

WW: Has the process caused you or others to change your political stance?

KC: I was already a socialist when this struggle began, but I would say the experience further radicalized me. I realized that working within the system was terribly inefficient, and I have now taken on a harder-line, anti-authoritarian position. Myself and several of the librarians involved have also been talking about how to decrease hierarchy in public library administrations and increase accountability.