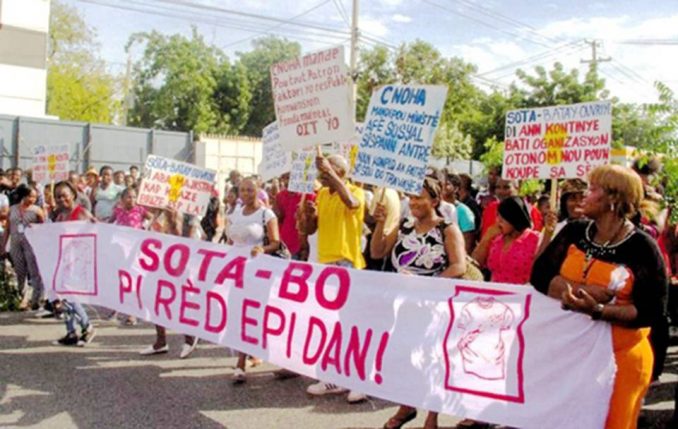 Thousands of workers surged through Port-au-Prince’s streets to demand a minimum wage hike to $12.71 (800 gourdes) per day and better work conditions.

Confronting brutal heat, nasty cops and stubborn resistance from their bosses, workers in the Haitian textile trades came out by the thousands June 26 to demand that the minimum wage be raised from 300 gourdes (about $4.71) a day to 800 gourdes (about $12.71).

As well as demanding a wage increase, the workers and their unions are demanding social services.

The march began at the Port-au-Prince Industrial Park, then wound through the capital city to a rally in front of the Social Affairs Ministry.

“Social services mean subsidizing the food, rent, transportation, and education of the workers’ children,” Dominique St-Eloi, general coordinator of the National Central of Haitian Workers, told Haïti-Liberté June 28. “We talked to the Social Affairs Minister, who lied to us. He promised buses, and a subsidy of food and rent. Yet nothing has been done.” He added, “We are also going to work for the reintegration of more than 40 people who have been fired.”

The workers’ threat to walk out again on July 10-12 was reported in just-style.com, a website devoted to the clothing industry in the United States. When a significant portion of the production for brands and stores like Gildan Activewear, Hanes, Fruit of the Loom, Levi’s, Gap, JC Penney, Walmart and Target is affected, their owners want to know why and how to avoid these disruptions.

The Haitian government’s wage board has promised to increase the minimum wage to 335 gourdes per day. (AlterPresse, July 8) This will still keep the minimum below $5 a day, the level that workers in the United States got in the 1950s. The workers intend to maintain their struggle even though the government made a slight concession.

Workers in Haitian textile — mainly young women under 25 — have trouble buying food (with enough calories to keep them working) and water and paying transportation costs that the Haitian government has just raised sharply. Most of the food bought in Haiti is imported and priced in U.S. dollars, but labor is paid in low-priced gourdes.

Striking in a small, poor country, where a vast majority of workers don’t have a steady job, is hard. But the Haitian textile workers have been in the streets on and off since early May in a courageous struggle for dignity and economic justice.