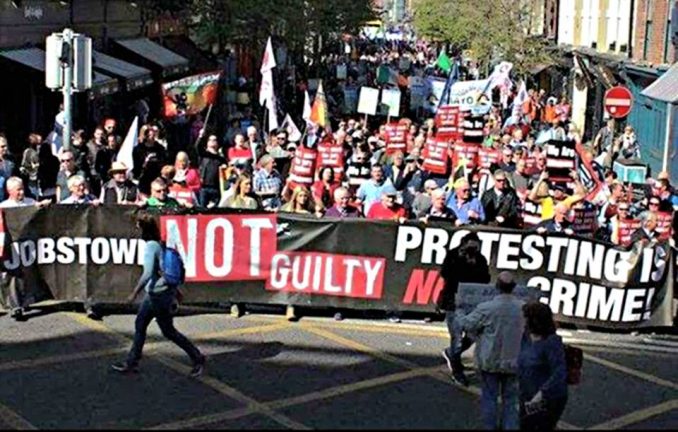 Excerpted from a report by Ian Ó Dálaigh, general secretary of the organization Éirígí in Ireland, writing in a personal capacity.

On Nov. 15, 2014, a spontaneous protest took place in Jobstown, Tallaght, an overwhelmingly working-class area in southwest Dublin. Labour Party leader Joan Burton, who at the time was also tánaiste [26-county deputy prime minister], was delayed in a car for just over two hours by a sit-down protest.

The protest was directed against the vicious austerity measures of the Fine Gael/Labour coalition [government]. These measures included cuts to social welfare benefits, disability benefits, and pensions, and attempts to impose a water tax. As both minister of social protection and tánaiste, Burton played a key role in these attacks.

Nineteen of the protesters (18 adults and one teenager), including our own Scott Masterson, were arrested and charged with false imprisonment in the wake of this. The teenager has already been convicted.

To term a two-hour delay in a car — while surrounded by police — as false imprisonment was absurd, and the charges set a very dangerous precedent. Under this definition, any temporary delay or obstruction at a protest or picket, which for example inconveniences a politician, could be deemed “false imprisonment.” This was about intimidating people and criminalizing protest — and nothing more.

During the course of the trial, which commenced on April 24 this year, the state also attempted to further attack the right to free speech and the right to politically organize. Using the spurious cover of “potential jury tampering,” they demanded that the accused should remain silent about the case. The state sought to ban the accused from speaking publicly about the case during the trial and even to impose a ban on solidarity pickets in front of the Criminal Court of Justice.

They failed on all counts, just as they eventually failed in their attempts to undermine the right to protest by convicting the Jobstown accused.

Scott Masterson’s [attorney], in her closing statement to the jury, suggested that Scott should be thanked by the Irish people for his part in the Jobstown protest. She made the point that the Labour Party are guilty of political treachery, and that people have the right to protest against that treachery — which is exactly what Scott and the other defendants were doing.

The trial ran for just over eight weeks, culminating on June 29, when the jury gave a unanimous “not guilty” verdict for the Jobstown 7. The Jobstown Not Guilty campaign is now calling for the immediate dropping of all charges against the other 11 accused, as well as the quashing of the conviction of the 17-year-old in relation to the protest.