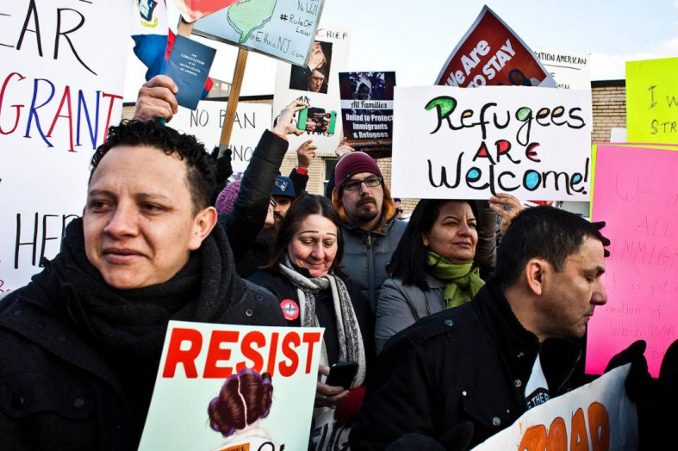 Protests and denunciations of the Trump administration’s modified travel ban have broken out in several cities.

The White House intensified its Islamophobia on June 29 with the implementation of a “revised” travel ban against immigrants from six predominantly Muslim countries. It happened only three days after the Supreme Court gave the green light for discrimination against these travelers.

The top court ruled in favor of a “partial ban,” to take effect until the justices deliberate on the case in October. Meanwhile, the court said entry could be denied to anyone from those countries without a “connection to the U.S.” and to those without a “credible claim of a bona fide relationship with a person or entity,” such as a business or school here.

Those coming from Iran, Libya, Somalia, Sudan, Syria and Yemen are prohibited from entering the U.S. for 90 days unless they meet these criteria. Additionally, the ruling gives the government the go-ahead to stop entry for all refugees for 120 days.

Missing from this ruling is the fact that many people in these countries are fleeing U.S.-led or U.S.-backed wars or drone attacks, with families divided because of these dire circumstances.

The definition of a “bona fide” relationship is a key question. The Trump administration’s criteria for who to allow as an applicant’s “close family” are based on the most narrow, Eurocentric and heterosexist definition of a nuclear family. An applicant’s grandparents, grandchildren, uncles, aunts and cousins are disqualified, amounting to a racist penalty against refugees from the many cultures that still maintain extended family ties as core relationships.

Refugees in lesbian, gay and transgender relationships and their families of choice are entirely omitted in the criteria for bona fide relationships. Moreover, immigrant rights and refugee aid groups, so important to those whom they assist, do not qualify as bona fide entities.

Trump whipped up Islamophobia throughout his election campaign when he said that, as president, he would ensure that no Muslims would be allowed into the U.S. In January, the White House issued a travel ban against all immigrants and visitors from seven, later changed to six, countries with majority Muslim populations, claiming “reasons of national security.”

This phony and bigoted allegation was a nod to Islamophobes in the White House, including Steve Bannon, and to far-right forces in the U.S. who backed Trump’s presidential bid.

Strong demonstrations took place immediately at airports around the country after customs agents and border guards stopped travelers from these countries at points of entry. Thousands of people raced to airports to show solidarity with their Muslim sisters and brothers. Civil liberties and immigrant rights organizations protested and legally contested the ban. Some courts blocked it.

Then, in March, the White House maneuvered and issued a “revised” ban, once again prohibiting travelers from six majority-Muslim countries for 90 days, and banning all refugees for 120 days. Citing Trump’s anti-Muslim vitriol during his campaign, courts struck down sections of this ban, declaring it was directed at Muslims and, therefore, discriminatory.

But the White House reactionaries persisted and appealed to the Supreme Court, which unanimously agreed that the president can control immigration. Not one justice dissented. The court narrowed the all-out ban imposed in January, but allowed a modified version of it, and criticized lower courts that ruled against it.

The White House is crying “victory” and is aggressively implementing the ban as restrictively as possible. Civil liberties and refugee assistance groups dispute that the Trump administration can bar whomever it chooses, and vow they will monitor and oppose restrictions on who can enter the country. (New York Times, June 26)

The state of Hawaii has already submitted a legal challenge to push back the White House, arguing for the entry of all relatives of U.S. residents. There will be other court challenges.

Demonstrators say any prohibition against Muslims entering the U.S. is unethical, bigoted and inhumane -– and must be stopped.

Nisrin Elamin, a Sudanese Ph.D. student detained at JFK Airport in January while trying to re-enter the country, spoke at a New York City rally on June 29. She stressed, “National security has always been used to justify state violence and surveillance against communities of color in this country.” (Time, June 30)

Moreover, the Trump administration’s xenophobia has already endangered the safety of Muslims, other oppressed people and immigrants, as white supremacists have been emboldened to commit violent acts.

Maha Hilal, a Muslim-American of Egyptian descent and a steering committee member of D.C. Muslims for Justice, said of the high court’s ruling: “Decisions like these which come on the heels of a long history of discriminatory, racist and Islamophobic policies … magnify the legitimate fear that one will be targeted by state violence or become a target of societal violence.

“The Muslim ban,” continued Hilal, means that Muslims “will be viewed almost exclusively as national security pawns. … The ‘war on terror’ has always been designed to demonize all Muslims, citizens or not, to justify the most egregious, abusive and racist laws and policies.” (tinyurl.com/vf3h87f)

The Supreme Court is an arm of the capitalist state. It is not an impartial, neutral body. That makes it crucial to struggle against the court’s most recent ruling. Mobilizations around the country are vital to push back the reactionaries in the White House and Supreme Court and to stop any discriminatory ban against Muslims. 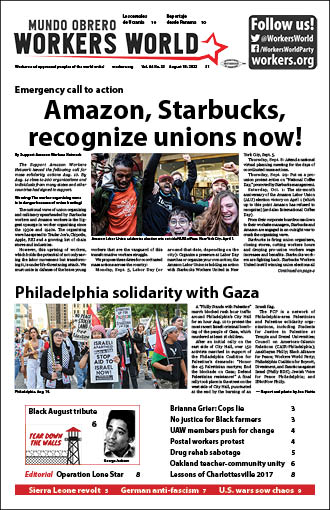