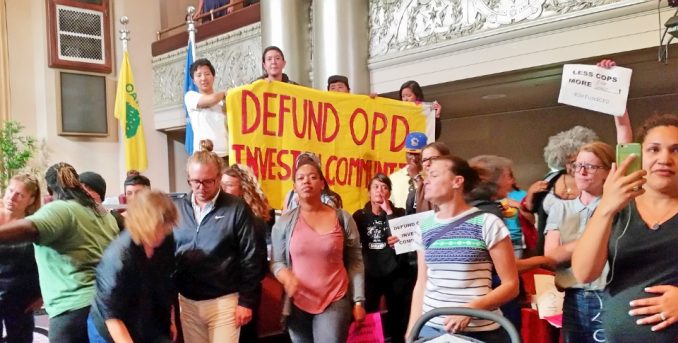 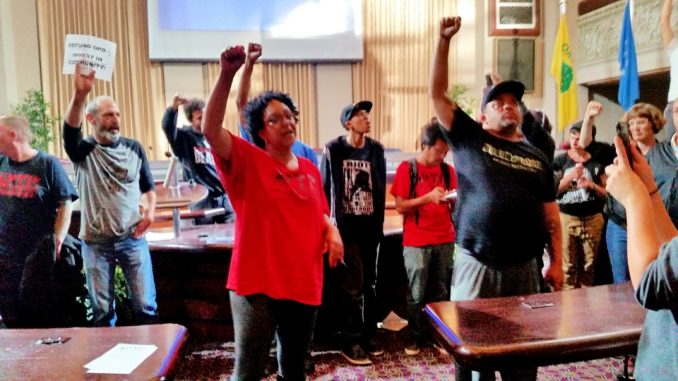 Oakland, Calif. — Allied campaigns for a “People’s Budget,” led by the Defund OPD (Oakland Police Department) and Refund Oakland coalitions, forced the Oakland City Council’s “Conservative Caucus” to ram through their budget on June 29, using a legally questionable parliamentary maneuver. The council was up against a June 30 state deadline to pass a two-year budget.

Dubbed the “Conservative Caucus” by the Anti Police-Terror Project, council members Larry Reid, Annie Campbell Washington, Lynette Gibson McElhaney and Abel Guillen were at first unable to get the required two-thirds majority to pass their budget.

They faced a packed house of people demanding passage of a “People’s Budget,” an alternative budget proposed by Desley Brooks and Rebecca Kaplan, which, though far from perfect, put more money towards people’s needs and was derived in consultation with many community groups.

The Conservative Caucus, after a 20-minute recess, pulled several one-time-only expenditures from their proposal to allow passage of their budget with a simple majority. This parliamentary maneuver was strongly challenged by Brooks, who claimed it was an illegal move since the revised budget hadn’t been formally “costed.”

The Defund OPD campaign was launched a year ago by the AP-TP in response to the OPD rape scandal, when national and international headlines announced accusations that OPD officers had been involved in the sexual abuse of an underage girl. This was after the police killings of seven Black men in Oakland in 2015.

On its Facebook page, Defund OPD said: “Our mission is to reduce the Oakland Police Budget by 50% and reinvest that money into alternative non-police programs that can better protect and strengthen our communities. We envision free mental health clinics, trained mediators and social workers who are able to respond to emergencies, and EMS & Fire Departments that are not tied to the police force.”

The Refund Oakland coalition supported Defund OPD and called on the council to “reinvest in the working-class and communities of color that make it great. How? By ensuring that tenants and long-term residents are protected, equity is a priority in the agenda and worker rights are enforced. It’s time to prioritize public services, housing our residents with anti-displacement measures, and protecting our workers and artists who make Oakland the ‘soul’ of the Bay.” Refund Oakland is a coalition of labor and community groups pushing for a “people’s budget” to fund housing, jobs, youth programs and education. (Refund Oakland Facebook post)

Defund and Refund worked together over the past months in attending all budget hearings held by council members and challenging the status quo budget being put forth. Defund OPD launched a social media campaign using a sign that said “Less Cops, More ____.” People were asked to fill in the blank with what they thought should be supported in a people’s budget and to post pictures of themselves holding the sign.

AP-TP, with its Defund OPD grouping, had led an action at the June 26 City Council budget meeting, when the Conservative Caucus had originally planned to push through their budget. After declaring during public comment that they wanted to lock down a people’s budget, supporters locked themselves to the gates between public seating and the council dais.

The packed council chambers then erupted as hundreds of people stood up chanting “Defund OPD!” and “Get up! Get down! There’s a housing crisis in this town!”  Council President Larry Reid led the council out of chambers as the audience declared victory in having shut the budget proceedings, and the council meeting, down. Reid briefly returned after the people had filed out, forced to officially adjourn the session.