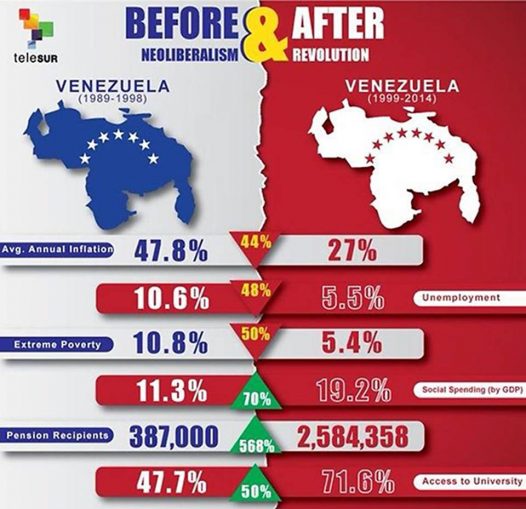 Excerpted from TeleSur English, this article opens a compelling analysis of how Marxism can be used to take apart the recent capitalist media attacks on the Bolivarian Revolution in Venezuela. For the complete article go to tinyurl.com/yx2gyfa

These are the demands that mainstream media will have you believe are behind ongoing anti-government opposition protests in Venezuela, which have since claimed over 50 lives.

Borrowing plot lines from “David and Goliath,” the alphabet soup of corporate news outlets perpetuates the same ill-conceived dichotomy. On one side are the powerless, peace-loving democrats protesting for political freedom. On the other side is the powerful, violent authori­tarian government fighting against those demands.

This narrative, indisputably dominant in mainstream media, is intentionally designed to engender support for regime change in Venezuela. Outlets like CBS, CNN, NBC, ABC, Fox News and The New York Times, for example, are owned by wealthy global elites who are top investors within the military-industrial complex and profit handsomely from endless war.

Publications like the Miami Herald exemplify mainstream media’s drive for war by publishing pieces suggesting “What Trump should do about Venezuela’s drift toward a full-blown dictatorship.” This falls entirely in line with their wealthy corporate backers, who salivate over the idea of recolonizing and privatizing Venezuela’s vast oil resources.

Their rallying cries for U.S. action against Venezuela resemble those made against Yugoslavia, Afghanistan, Iraq and Libya before their respective invasions in 1999, 2001, 2003 and 2011. Anyone who has closely followed these invasions, however, can attest to the central role inaccurate mainstream media reports have played in facilitating their disastrous outcomes.

Let’s not forget that in 2003, for example, establishment news propagated a disastrous lie: the claim that the Iraqi government was then in possession of “weapons of mass destruction.”

But as the U.S.-led Iraq Survey Group was forced to admit in 2003, there was zero evidence that the Iraqi government had produced or stockpiled any weapons of mass destruction since 1991. That was the year United Nations sanctions were imposed against the administration of former President Saddam Hussein.

The results of this lie, as history has shown, were catastrophic. Tens of thousands of Iraqi civilians and combatants died, thousands more were violated and injured, and entire cities were left in ruin.

That’s why those who truly want to understand what’s going on in Venezuela can’t rely on publications that have the economic interests of their wealthy corporate backers at heart. Those seeking the truth about protests in Venezuela must ground their investigation in the interests of the working class masses who would be most affected by any ­attack or invasion. . . .

Marxism, a method of studying and responding to world events, is best suited for this since it is fundamentally based on advancing the best interests of workers, the majority, and not wealthy elites, the minority. And as will later be shown, it demonstrates that the worker-led govern­ment is truly promoting freedom, democracy and stability, not the Wall Street-backed opposition.

One of the biggest problems inherent in mainstream media coverage of protests in Venezuela is their method of analyzing them.

If you take a close look at most articles or videos produced by establishment publications, you’ll notice an underlying trend. They discuss present-day turmoil in Venezuela without providing adequate historical context.

Not only do they intentionally leave out the incessant economic and political attacks waged against the Bolivarian Revolution since taking power in 1999, which have hampered the government’s ability to advance peace and stability. They also fail to mention what the country was like before 1999 when late President Hugo Chávez took office and began radically improving conditions for Venezuela’s working-class majority.

Since the early 2000s, for example, supermarket owners affiliated with Venezuela’s opposition have hoarded food products so they can resell them at higher prices and make large profits. Food importing companies owned by the country’s wealthy right-wing elite are also manipulating import figures in order to raise prices on goods.

In 2013, former Venezuelan Central Bank chief Edmee Betancourt ­reported that the country lost between US$15 ­billion and US$20 billion the previous year because of hoarding and price manipulation.

Right-wing sabotage of Venezuela’s … economy, which has been waged on numerous fronts since 1999, serves to bolster political attacks against the government. This tactic of destabilization, expounded upon by U.S. political scientist Gene Sharp, has been used against governments opposed to Wall Street from time immemorial. …