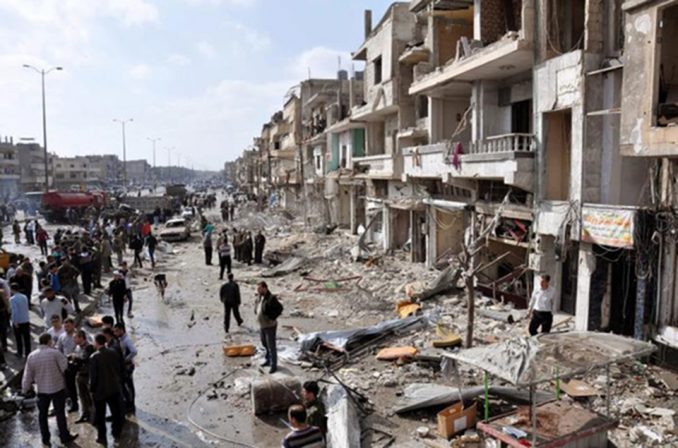 As the danger of a major conflagration in Syria continues to grow, the silence of the corporate media and political establishment is ominous.

The U.S. has dropped tens of thousands of bombs on Syria and sent thousands of U.S. troops to the region. Major world powers are already involved.

The announcement was made without a shred of evidence. Instead, there were vague claims that U.S. intelligence had “identified potential preparations” for a chemical attack. These were all too familiar, after the phony pretext for the invasion of Iraq in 2003.

The White House statement was immediately followed by a Twitter statement from U.S. Ambassador to the United Nations Nikki Haley: “Any further attacks done to the people of Syria will be blamed on Assad, but also on Russia and Iran.” She was expressing Washington’s frustration that despite its bombing sorties and despite pulling 10 other countries into the war, Washington’s plan for regime change has failed.

Acting on cue five days after the White House statement, a counterrevolutionary group, Failaq al-Rahman, accused the Syrian army of using chlorine gas against its fighters in battles east of Damascus. The Syrian military immediately denied these charges, calling them a fabrication.

The group making this charge is a past recipient of U.S. military aid and equipment and is affiliated with Washington’s client group, the Free Syrian Army. It claimed that more than 30 people suffered gas suffocation as a result of an attack in Ain Tarma, a suburb of Damascus, the capital.

The group, allied with al-Qaida forces, has been fighting both the Syrian government and rival opposition forces in a chaotic internecine conflict in an insurgent enclave in East Ghouta. Thousands of mortar shells and rockets have been fired from this enclave into nearby Damascus over the past few years.

Not only are counterrevolutionary factions in Syria fighting each other, but U.S. government departments are at odds. According to Fox News on June 27, “Several State Department officials typically involved in coordinating such announcements told the Associated Press they were caught completely off guard by the warning, which didn’t appear to be discussed in advance with other national security agencies.”

British Defense Secretary Michael Fallon said the U.S. had not shared any evidence of a specific threat of a chemical weapons attack.

The major corporate media gave headline coverage to the unsubstantiated charges against Syria. But questions and controversy were buried deep within the articles.

Overtly suppressed by all major corporate media in the U.S. and Britain was an exposé released June 25, the day before the White House statement, by award-winning investigative journalist Seymour Hersh.

Hersh challenged the U.S. claim that the Syrian government had launched a sarin gas attack in April. According to Hersh, only the German publication, die WELT, was willing to publish the fact that Trump had ignored intelligence reports from U.S. agencies when he ordered a “Tomahawk” missile attack on the Syrian air base on April 6.

Hersh is neither a revolutionary nor a left-wing journalist. He never attacks U.S. imperialism in general. But his carefully calibrated exposés, usually carried in major U.S. and British publications, have criticized egregious acts in U.S. wars, such as the mass murder of villagers in My Lai, Vietnam, in 1969.

Major U.S. and British media carried his exposés on Korean Air Flight 007 in 1986, an exposé of Israel’s nuclear arsenal in 1991, and President Bill Clinton’s bombing of the Al-Shifa pharmaceutical factory in Sudan. In 2004, he reported on U.S. systematic torture of hundreds of detainees at Abu Ghraib Prison in Iraq.

Hersh’s exposés and analyses have won the Pulitzer Prize, Polk Award and National Book Award. Yet he had to go to Germany to get his latest exposé published.

That none of the major U.S. or British publications would touch it shows broad ruling-class support at the highest levels for a continued and expanded U.S. war against Syria. This was also shown by the general applause from Republican and Democratic politicians as well as the corporate media when Trump launched the April 6 attack. They described him as “presidential” for that.

It was the first praise since the election coming from Democratic Sen. Chuck Schumer and Democratic House Minority Leader Nancy Pelosi.

The new charge of a “potential” gas attack comes amid growing U.S. frustration after years of covert efforts to overthrow the sovereign government of Syria have failed.

Aid funneled through Saudi Arabia, Turkey, Qatar and the United Arab Emirates to tens of thousands of mercenary and reactionary forces have also failed to bring down the Damascus government.

The war has displaced almost a third of the Syrian population and created millions of refugees. But the Syrian government’s success shows it benefits from the deep determination of millions of Syrians to maintain Syria as a secular and sovereign state.

In September 2014 the Obama administration began direct bombing of Syria, claiming to be targeting the so-called Islamic State group (IS). The Syrian government has consistently opposed this direct military intervention and past covert intervention.

The Pentagon then pulled Britain, France, Turkey, Australia, Saudi Arabia, United Arab Emirates, Qatar, Jordan and Morocco into its air campaign. After a year of the bombings, the Syrian government appealed to Russia for air support.

Israel has also used every opportunity to bomb Syrian government forces, the latest being on July 1.

In May the U.S. military attacked Syrian ground forces near the Al Tanf Crossing on the Iraq-Syria border. The Syrians were engaged in a campaign to open the major highway to Damascus and clear the surrounding region of military saboteurs.

U.S. and British Special Forces were in the area advising and providing advanced offensive weapons to a Syrian mercenary group called the Revolutionary Commando Army. To protect these covert forces, the U.S. bombed Syrian troops using the preposterous claim of self-defense. U.S. and British Special Forces are in another country attacking soldiers of that country who had not attacked or killed any of them. How could that be self-defense?

A U.S. jet shot down a Syrian fighter jet west of Raqqa on June 18. General Joseph Dunford, chair of the Joint Chiefs of Staff, resorted to using a 2001 Authorization for the Use of Military Force as legal justification. The AUMF was worded to target governments and individuals who supported the Sept. 11, 2001, World Trade Center bombing.

The Syrian government has never attacked the U.S. It is fighting against al-Qaida and IS. Meanwhile U.S. allies such as Israel, Saudi Arabia and Turkey have aided al-Qaida and IS in Syria.

Despite wholesale media censorship and complete support from the political establishment for continuing the war on Syria — both Republicans and Democrats, from Trump to Hillary Clinton and Bernie Sanders — polls show millions are opposed to this war.

The movement against U.S. wars must be more confident and outspoken in mobilizing opposition.

The growing danger of a wider war forces this onto our agenda.