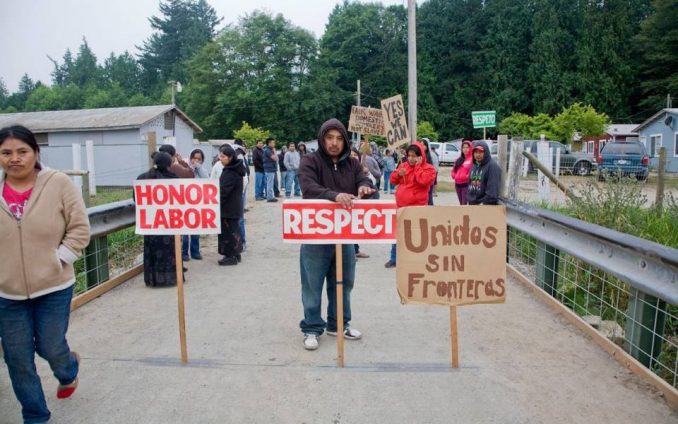 In a major victory for U.S. farmworkers, about 200 migrants who pick berries for Sakuma Brothers in Burlington, Wash., ratified their first union contract on June 15. This win is stunning, given the workers’ special oppression — they’re from the Mexican states of Oaxaca and Guerrero and speak neither English nor Spanish but Mixtec and Triquie. Farmworkers have been legally excluded from organizing, except in California, since 1935.

The Families United for Justice union, which is 500 strong and independent from the AFL-CIO but works with the Washington Labor Council, has a history of success. It played a major role in the Driscoll berry boycott of 2016 — the Driscoll brand distributes Sakuma berries. The boycott was suspended after Sakuma agreed to hold the election. The deal boasts a rate of up to $15 an hour for experienced workers, seniority rights, “just cause” discipline and a base rate of $12 an hour — $1 above Washington’s minimum wage! (NW Publishing News, June 15) FUJ just earned another notch in its stellar history!

Teamsters-organized drivers picketed for a week starting June 19 outside two of the nation’s largest port and rail facilities in Los Angeles and Long Beach. The drivers called the unfair labor practices strike to protest their illegal misclassification as independent contractors by XPO Cartage, a subsidiary of XPO Logistics (whose offices in Commerce, Rancho Dominguez and San Diego were also picketed). Misclassifying lets companies shirk all responsibilities by claiming workers are not employees, leading to enormous profits. This strike spotlights the wage theft from 12,000 big rig drivers, called “sharecroppers on wheels,” at the two ports.

Global giant XPO rakes in millions annually from such customers as Toyota, BMW, P&G and Sony, so it could easily meet the truckers’ demands. However, it’s appealing the California Labor Commissioner’s wage-theft award of $1 million for five XPO drivers. (teamsters.org, June 19 and 26) WW says: Support all struggles of low-paid, predominantly immigrant contract workers in all industries!

“There is most definitely a growing militancy among Latino workers in the South,” Workers’ Dignity organizer Alexa Malischack told PayDay.com. In May, 100 Latinx non-union construction workers in Louisville, Ky., went on strike for two days after discovering they were being paid $14/hour less than whites doing the same work. These workers are now organizing to join Carpenters Local 175. As Payday noted: “With the Latino population growing in the South, many activists say that the key to organizing the South is harnessing solidarity across [nationalities and communities].” (June 22)

After a five-month fight, the Graduate Employees Organization at the University of Michigan, American Federation of Teachers Local 3550, ratified its first two-year contract on April 14. Local 3550, which represents more than 1,800 graduate student instructors and graduate student staff assistants, had to rally, march and stage a two-day sit-in before the administration would bargain seriously. Though they wanted a 5.5 percent wage hike, the workers won an increase of 3.35 percent annually; zero premium in GradCare health insurance and review process for transition-related care; child care subsidy and paid parental leave; and discrimination protections for international grad students.

Adjunct faculty at University of Massachusetts-Lowell are fighting an uphill battle for a contract given the administration’s refusal to bargain. United Auto Workers Region 9A, with members in the Northeast and Puerto Rico, called a rally for its members in Local 259 on June 22. A loud brass band led hundreds on a march around campus. The primary slogan and chant were “Equal pay for equal work.” Lowell adjuncts make 32 percent less than adjuncts at four other UMass campuses and have no health care coverage. (Facebook/UAW Region 9A, June 20) WW supports these “precarious” workers demanding social justice!