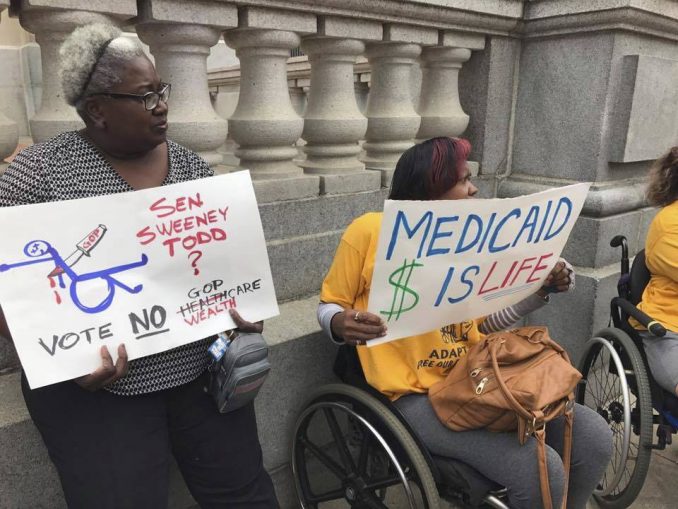 “Healthcare not Wealthcare” was a sign left behind at the die-in protest on June 22 inside Senate Majority Leader Mitch McConnell’s office in Washington, D.C., by members of ADAPT, a disability rights organization.  The group was protesting the Republicans’ “rewrite” of the Affordable Care Act.

Over 60 ADAPT members came from across the country to fight for their freedom. If the proposed $834 billion cut in Medicaid occurs, many people who are disabled and elderly will die or be warehoused in institutions.

Some 43 activists were arrested during the protest. U.S. Capitol Police picked them up off their wheelchairs, dumped some people unceremoniously on the ground, and then carted them outside to be arrested.

In front of McConnell’s office, five Capitol police lifted 29-year-old Stephanie Woodward off her wheelchair.  She didn’t go quietly, but shouted, “No cuts to Medicaid!” as she was carried outside. Woodward is an ADAPT member from Rochester, N.Y.

“I was born with spina bifida in 1988,” Woodward told the Huffington Post.  “It wasn’t easy for my folks, my mother, a hairdresser, and my father, an electrician, to get me the health care and multiple surgeries I needed.”  She has since graduated from law school. Now she has private insurance, but says, “Without Medicaid, I would not be here.” (June 23)

The same article tells of ADAPT member Laura Halvorson, a 33-year-old Dallas native, who has muscular dystrophy and reluctantly decided not to resist when Capitol police told her to move along. Resisting could have damaged the breathing apparatus attached to her chair, creating  a life-threatening situation.

Halvorson requires help with chores like bathing and cooking, so she is trying to obtain a personal care attendant through a Medicaid waiver  program. If she can’t get one, she would be forced to live in an institution at twice the cost of home care, a point stressed by protesters.

Speaking on the June 23 MSNBC show “The Last Word,” Karen Clay characterized this ACA “rewrite” as a decimation: “I cried watching the police carry the disabled activists. What kind of country are we? I was concerned for the safety of the people the police were handling. You need training to know how to handle people who ride in chairs. Their muscles have atrophied and their bones are not used to carrying weight.”

In the interview, Clay talked about her son, Mike Phillips, who has spinal muscular atrophy, is confined to bed, and manipulates a computer to communicate. With a Medicaid waiver he has a personal care assistant who takes him to the movies, Starbucks or out to dinner with friends. “I’m not Ryan Gosling” he quipped, “but I live a good life.”

Medicaid provides essential life support. The program pays home care attendants who provide services needed for daily living, like cooking,  bathing and dressing for work. It enables people with disabilities to have access to durable goods, such as wheelchairs and oxygen tanks, and to live as normal a life as possible in the community, to work and to raise families.  These things would be impossible without the assistance and necessities jeopardized by this inhumane bill.

To add insult to injury, the funds slashed from Medicaid would be used to subsidize tax cuts for the wealthy 1% —  “wealthcare” as the protesters claim. Filling in the gaps would be left to the states; many won’t do it or do not have the money to do so.

The bill was drafted in secret. McConnell has been planning to rush the bill through before the Senate’s July 4 recess. (See editorial, page 10.)

But nobody is waiting to see how the Senate votes. Spontaneous protests are popping up opposing the bill. Planned Parenthood, which would be defunded under the bill, called a demonstration for June 27. Their email read, “This is not a drill. We’re in the fight for our lives.”

ADAPT members are fighting hard because their lives and freedom depend on it. They organized actions at senators’ offices across the country on June 19, 20 and 21, in addition to the Washington protest which made news, even abroad.

Mike Oxford, an ADAPT organizer in Kansas, telling this writer of the strong bond that exists between people with disabilities and their caregiver workers, stressed that the organization campaigns for higher wages for them. They succeeded in Kansas where their hourly pay was raised to $10.

ADAPT got its start in Denver in July 1978, fighting for the right to ride city buses. Then, 25 activists argued that as taxpayers they had a right to travel on the local buses they paid for. Carrying placards which read, “Taxation without Transportation,” they circled the buses and sat down for three days, preventing traffic from moving. At night, they got off their wheelchairs and lay down in the street to sleep.

It took five years and more demonstrations, but ADAPT finally got wheelchair-accessible buses. They did it with humor; their banner read “[We want] to go boldly where everybody else has gone before.” That protest sparked similar demonstrations across the country.