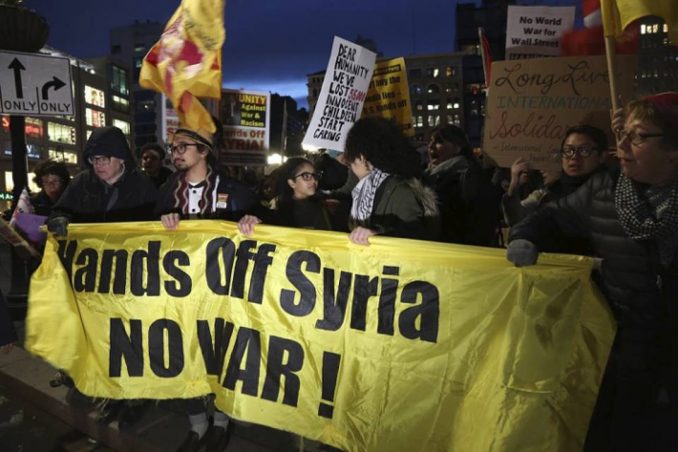 All across the globe, the greedy hands of U.S. imperialism are outstretched, exploiting the resources of nations (mostly in the global South), via unjustified “wars on terror” or using countless U.S. military bases in countries outside of the United States.

The U.S. has over 800 military bases in over 70 countries around the world, including in Kuwait, south Korea, Aruba, Kenya, Qatar, the Philippines and Colombia, just to name a few of them, with 113 bases in Japan alone, according to military scholar David Vine, in a 2016 report. (tinyurl.com/y9tstm55)

It’s likely the U.S. has more military structures overseas than any other nation or empire that has ever existed in human history, according to Vine’s report. That is simply appalling, considering that the U.S. will only have existed for 241 years this coming July 4.

These bases are for invading countries and exploiting land and labor. U.S military personnel stationed outside of the U.S., often on a completely different continent, have created and will continue to create resentment against imperialism. This resentment has turned deadly and has cost thousands of lives since the start of the new millennium alone.

The key reason that Osama bin Laden, the late leader of al-Qaida (who himself was killed by U.S. Navy Seals invading Afghanistan), wrote two fatwas, one in 1996 and one in 1998, that called on Muslims worldwide to kill U.S. Americans, is directly because of the presence of U.S military bases in Saudi Arabia. Thus, U.S. military occupation can be blamed for the Sept. 11, 2001, destruction of the World Trade Center buildings and the loss of nearly 3,000 lives in the first place.

In the aftermath of 9/11, the late President Saddam Hussein’s Iraq issued a statement charging that “the American cowboys are reaping the fruit of their crimes against humanity.” (cnn.com, Sept. 12, 2001) Hussein himself, as well as all Iraq, would be victims of the imperialist U.S. war machine within 19 months of the 9/11 attacks. President George W. Bush accused Iraq of possessing “weapons of mass destruction” and then proceeded to invade Iraq under the false premise of looking for weapons that weren’t even there.

The U.S. military invading Iraq may as well have been looking for the tooth fairy. Oh wait … They were looking for something that actually was there: oil.

Private banks and corporations can establish themselves in foreign lands in an attempt to control a piece of those economic markets, establish monopolies in the colonized lands through the concentration of capital and production, and place themselves in a position to export profits from the stolen land.

Britain, France, Germany and Japan’s ruling classes also exploit labor and extract resources from other countries, accumulating profits from the commodities produced and sold. Britain’s rulers still have their greedy hands on the north of Ireland, the Bahamas and Bermuda, just to name a few places. Japan, which occupied all of Korea and a huge portion of eastern China until World War II, still exploits through its industry and banks. Germany has military personnel and military apparatuses in African nations such as Tanzania and Cameroon, and dominates the economies of much of Eastern Europe. U.S. imperialism is not alone in stealing land or dominating economies to accumulate profit.

To expand the capital that these imperialist ruling classes already have — which they have in the first place due to the workers inside their nations working their asses off to make them filthy rich — the governments of the imperialist countries and/or private companies take the following steps: they colonize land that doesn’t belong to them to exploit low-wage labor; they gain access to new, foreign economic markets; they influence if not outright control the foreign governments; they influence the religious preferences of the Indigenous people; and with blatant racism they impose the belief that the colonizing peoples are superior to the ones they are colonizing.

Not surprisingly, the previously mentioned imperialist nations support each other in exploiting their victims. An example: When 9/11 happened, the governments of Germany, France, Britain and Japan all supported the U.S “war on terror” and invasion of Afghanistan in 2001. Though France and Germany refused to join the 2003 U.S.-British invasion of Iraq, they later aided Iraq’s occupation.

France continues to exploit African nations while the U.S. and Great Britain compete for their own share of the spoils. All of these imperialist ruling classes turn their back on the workers, who toil for shit wages under dangerous, even fatal conditions. Imperialism is deadly; it is greedy and cruel by design; it is something that a socialist revolution will have to eradicate from the face of the Earth.