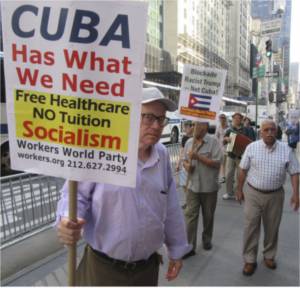 A group of people in solidarity with Cuba picketed across from Trump Tower in New York City on June 15. They called the demonstration to preempt the bigot-in-chief’s Miami speech the next day attacking the socialist country.

Despite the ritzy surroundings on Fifth Avenue, many people were friendly. One Black man walking by shouted “F–k Trump!” continuously. “Travel to Cuba Yes!, Trump No!” was one of the protesters’ chants.

The action was organized on short notice by Joan Gibbs and Sam Anderson and was joined by Gail Walker, executive director of the Interreligious Foundation for Community Organization/Pastors for Peace, and long-time activist and educator Esperanza Martell. Workers World Party First Secretary Larry Holmes was one of several WWP members who joined the picket line