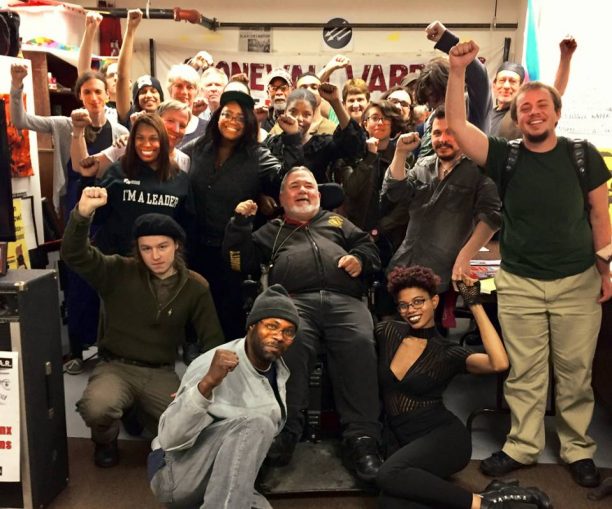 The Action Center in the Boston neighborhood of Jamaica Plain was packed June 16 for Stonewall Warriors and Workers World Party’s LGBTQIA Pride forum on “Capitalism, Racism, LGBTQIA Oppression and the Class Struggle.”

The forum was a follow-up to and celebration of the historic Stonewall Warriors Queer and Trans PoC Liberation, Anti-Capitalist Contingent in Boston’s LGBTQIA Pride demonstration on June 10. (Workers World, June 14, tinyurl.com/yalc8fl8)

The forum opened with a report by Christine Allsopp on the reopening of the Sexual Minorities Archive in Holyoke, Mass., with the dedication of the Sylvia Rivera Room and the Leslie Feinberg Library. A video was shown of WWP member Minnie Bruce Pratt reading a poem in memory of Feinberg, who was her spouse. Several participants spoke of the impact of becoming aware of key LGBTQIA history for the first time at the SMA dedication. (Workers World, June 7, tinyurl.com/y74ech54)

Nate Heathman followed, with a moving tribute to Black and other trans women of color murdered in the last two years. He led the group in saying the names of these many trans women.

Diva T. Williams gave the main report, followed by discussion, on the  historic Stonewall Warriors Queer and Trans PoC Liberation, Anti-Capitalist Contingent in Boston’s LGBTQIA Pride demonstration. Williams’ report included video footage from both the main contingent and from the direct action at the front of the march, which lifted up the names and images of Black and other trans women of color killed in 2017. It also highlighted the coordinated demands to rid the annual parade of big-bank sponsorship, police and Immigration and Customs Enforcement  presence, and return Pride to the protest spirit of the historic Stonewall Rebellion.

Two direct-action participants attested to how empowering the actions were. Williams concluded her report with a proposal to organize an expanded effort to bring this revolutionary spirit to the entire march in 2018.

The forum ended with a review by Frank Neisser of the origins of the oppression of LGBTQIA people, the overthrow of the matriarchy and the subsequent division of society into classes, as explained in two books by Workers World Party comrades: Bob McCubbin’s “The Roots of Lesbian and Gay Oppression, a Marxist View” and Leslie Feinberg’s “Transgender Warriors.”