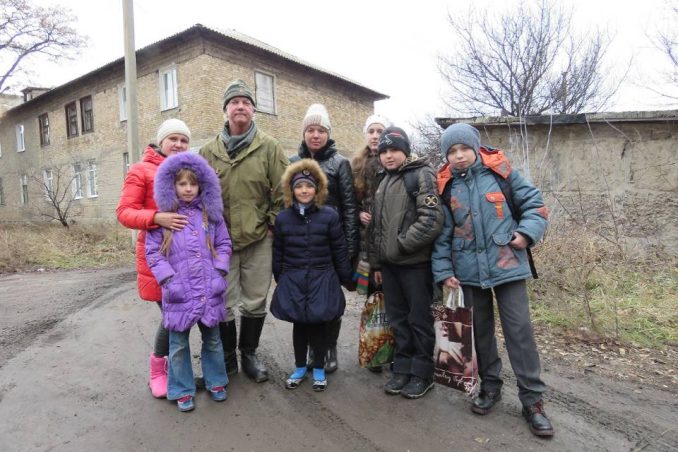 Russell Bonner Bentley was born in the United States and is now an “Information Warrior” for the Donetsk People’s Republic (DPR), which declared its independence from Ukraine in 2014. This former U.S. soldier went there to fight against fascism in Ukraine and around the world.

Back in the 1990s when he was in the states, Bentley spent much of his adult life fighting for justice, including the struggle to free U.S. political prisoners Leonard Peltier and Mumia Abu-Jamal, both of whom he called “great men and true American heroes.”

Although he describes himself as a poet by nature, Bentley left the U.S. in 2014 to join the Essence of Time (EOT) unit in the newly independent Donetsk, which was being attacked by the Ukrainian army, including many openly fascist units. Bentley served as a rifleman and RPG gunner on the frontlines at the Donetsk airport and the village of Spartak.

The DPR and the Lugansk People’s Republic (LPR), which also broke away from Ukraine three years ago, formed a federation called Novorossiya. Bentley’s call sign in the army of Novorossiya is “Texac,” which is Russian for “Texas.”

In addition to being a DPR soldier, Bentley is a war correspondent combatting the lies of the U.S. government and the European Union, both of which have supported the Ukrainian government. Bentley has made scores of videos and penned numerous articles on the situation, otherwise largely ignored or distorted in the country of his birth.

“There has been very little accurate reporting about this war and the people of Donbass by Western mainstream media,” Bentley has written, “but I have done my part to get the real story out, to people in the West, and to the world.”

There are over 100,000 soldiers on the side of the Ukrainian government, including mercenaries backed by the U.S. and the European Union.  According to Bentley, “The Novorossian Armed Forces (NAF) facing them have less than 30,000 defenders on the front at any given time, and about 20,000 ready reserves on bases in the rear. We also have about 30,000 civilian reserves who are former soldiers and volunteers who can be called up in less than 48 hours.”

This May 2 marked the third anniversary of a massacre at the House of Trade Unions in Odessa, in southern Ukraine. Dozens of civilians were forced into the building by fascists in the Ukrainian Pravy Sektor (Right Sector Party), who then set the structure ablaze. Over 40 people were killed, many of their bodies unrecognizable. To this day none of the perpetrators have been brought to justice.

U.S. media outlets downplayed the massacre, calling the incident “a fire” in headlines as opposed to what it was: fascist murder. Bentley was in Rostov, Russia, on the anniversary of this tragedy. The occasion was a solemn one, and was observed in the DPR, the LPR and Russia.

“We do not forget this horrendous crime, and we will bring the murderers to justice,” Bentley said. “For myself and most people here, May 2, 2014, was the day Ukraine died and the day the U.S.-backed Kiev [Nazis] showed their true colors.”

Ukraine was formerly part of the Soviet Union, and before that, Russia. It was occupied by Nazi troops during World War II, who killed nearly 4 million people.

Aid for victims of today’s war

Bentley also works with Donbass Human Aid and Spendenaktionen für Novorossia, as well as EOT, on bringing humanitarian aid for young orphans, wounded soldiers and others ravaged by the perils of war. Together, they have brought medicine, food, clothing and other necessities to those most in need.

Bentley told WW: “The current military situation is very tense all along the Donbass front. The only people who say it is quiet there now are people who are not there.”

Bentley is writing a memoir about his journey from the U.S. to Donbass, primarily covering his six months with the EOT. The book is about halfway finished and will be called “Lucky Man,” a title reflective of Bentley’s feelings about his new mission in life. Working from a journal he kept at the frontlines, he describes the book as being a “human story” as opposed to a “war story.” Bentley is raising money to help edit and publish his “testament to history and redemption” in paperback, as well as in e-book format, and plans to narrate an audio version.

“The money raised from this book will fund further human aid and journalistic projects. I would also like to write my full biography at some point in the future. My life before I came to Donbass was also pretty interesting and unusual.”

On April 13, he was honored with citizenship and a DPR passport, which he called one of the proudest moments of his life and being like “my birthday.”

“We are seriously outmanned and outgunned,” Bentley said. “But our homes and families are behind us, and we are highly motivated by this and the fact that our cause is just.”

For more information about how to contribute to these efforts, visit Bentley’s website at www.russelltexasbentley.com or visit https://tinyurl.com/ybadudrn.