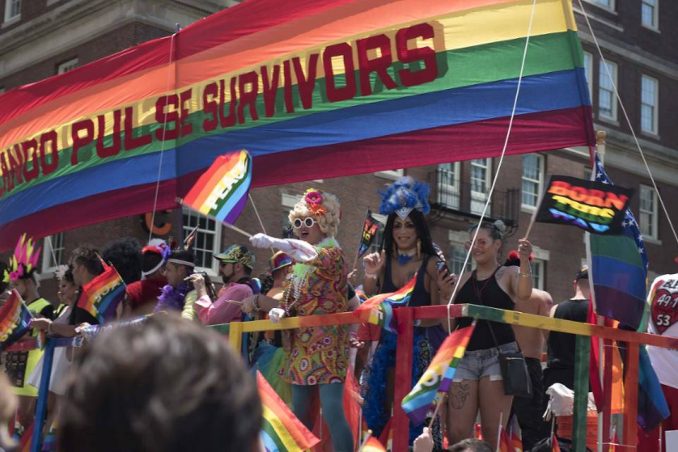 Bigger-than-life photos of the 12 trans people of color reported murdered so far in the U.S. in 2017 were hoisted as their names were shouted out to a crowd of thousands during a coordinated disruption of the Boston Pride Parade on June 10.

“Marsha P. Johnson has a big puppet here honoring her,” legal observer Jasmine Gomez reported over social media as she filmed the disruption. “She was the first Black trans woman ever asked to lead a Pride parade, and she is taking over now and just got in front of [Boston Mayor] Marty Walsh!”

The disruption was planned by groups that included the Network/La Red, Stonewall Warriors, Workers World Party, National Lawyers Guild and others.

Activists at the front of the march risked arrest to confront spectators with reminders of the staggering rate of violence that trans women of color face. Stonewall Warriors and WWP organizers also created space, under the umbrella of a “QTPoC Liberation/Anti-Capitalist Contingent,” for broad multinational, multigenerational participation in the Boston Pride Parade.

The outspoken revolutionary youth who joined Stonewall Warriors to help organize the contingent drafted a call for an anti-racist, anti-capitalist protest at the 2017 Boston Pride Parade. Their leaflet identified four demands designed to honor “the riot that made the parade” — the historic Stonewall Rebellion of June 1969 in New York City. 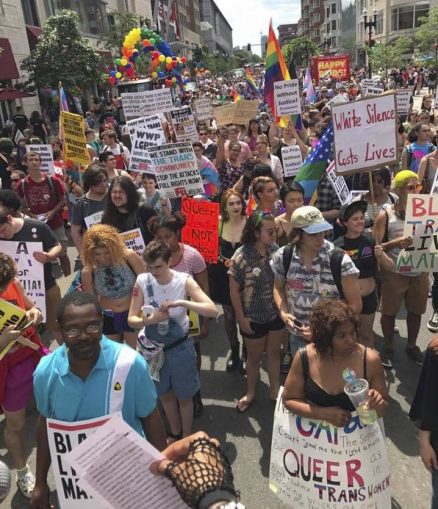 ‘The riot that made the parade’

Out of that uprising, trans leaders Sylvia Rivera and Marsha P. Johnson (whose pictures were carried along with those murdered in 2017) created living connections to other historic liberation movements of the time: the Black Power struggle, the Puerto Rican anti-colonial movement, the Native peoples’ uprising, the women’s movement and the upsurge against the Vietnam War.

In the spirit of the example set by Rivera and Johnson, Stonewall Warriors’ four demands called for official 2017 Pride events to stop sidelining radical and revolutionary Black community participation; for Pride to officially speak out against the rash of recent trans murders; for an end to Pride’s lucrative sponsorships from companies that profit off prisons, colonial debt and desecration of Native land; and for a ban on all police and Immigration and Customs Enforcement agents at Pride events.

Hundreds of people of trans, queer, enby, intersex, two-spirit, pansexual, disabled, ace, bisexual and other identities answered that call and turned out ready to take to the streets on June 10.

Everywhere along the sidewalks as they assembled, the group encountered an older generation of parade-goers who welcomed them with the same sentiment: “It’s about time that Pride was a protest again!”

Diva T. Williams, one of the group’s key organizers, emceed a spirited and combative march that delivered on the promise of a genuine alternative to the increasingly corporate annual Pride event.

Recognizing the union locals of health care workers and teachers marching directly in front of the group, the contingent stepped off with union solidarity, chanting “Who’s got the power? Workers got the power!” and “Donald Trump, we say No! Union bustings got to go!”

Armed with militant determination to return Pride to its roots as a political force for advancing struggles of the most marginalized, Williams and others led the crowd in chants calling for an end to solitary confinement for incarcerated trans people, housing for LGBTQ youth and an end to both the deportations of immigrant Black and Brown people and the murders of trans women of color.

As the train of protest wound its way through Boston streets, the marchers encouraged spectators to consider that the logo-branded trinkets handed out by the banks and corporations represented oil money, violations of Native sovereignty and prisons for profit — not Pride.

“Put it in the trash!” marchers urged spectators. Cheers erupted when a parade-watcher threw her Bank of America plastic fan in a garbage can.

Making its final turn onto Government Plaza, the loud, proud contingent boomed a hearty, sustained chorus of “The people, united, will never be defeated!” and “Long live the spirit of the Stonewall Rebellion!”