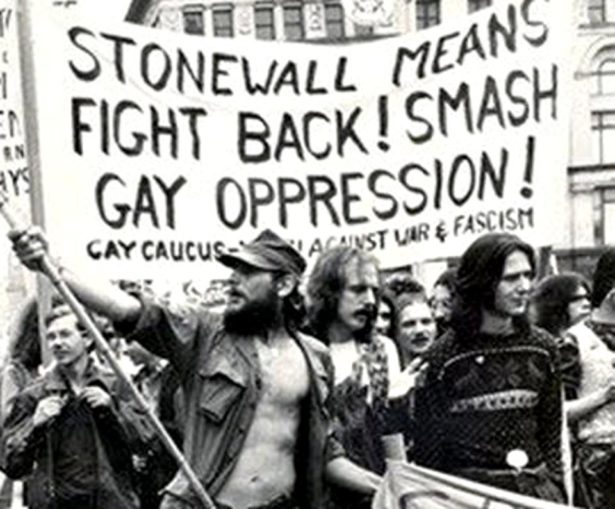 The following is part of a document called “From a Tendency to a Party” written in 1972 (45 years ago!) by Sam Marcy, the founder and theoretical leader of Workers World Party. This section was entitled “Gay oppression.” The term “gay people” reflects the language of the movement in those early days, before its evolution into a struggle explicitly against the oppression of lesbian, gay, bisexual, queer, trans and gender-nonconforming people.

The oppression of national minorities is not the only oppression meted out by a divisive ruling class. There is also the extra oppression of women, of youth and of gay people.

Only by dividing, fragmenting and continually pitting different elements of the oppressed masses against each other can the capitalist establishment maintain its sway over all society and hope to survive.

It is, however, the same sharpening of the persecution and oppression, the same divisiveness and fragmentation of the specially oppressed in society, that have awakened them to struggle and brought about a genuinely progressive militancy and resurgence of Black and Brown people, women, youth and gay people.

There is a striking difference in the character of the support which has been given by the progressive movement generally to the oppressed nationalities, women and youth, as contrasted with the limited support to gay people. A great deal of this can be explained by the fact that the prejudice may be even more deep seated and profound than in the other cases. Much of it emanated from the religious bigotry of the Middle Ages, and little has been done to combat it. On the contrary, it has been reinforced by the entire course of capitalist development.

Some explain the limited measure of support and sympathy to gay people by saying they constitute a numerically small segment of the population. This, however, is highly disputed by such an authoritative figure as Kinsey [Alfred Kinsey, an author of the Kinsey Reports].

It is particularly significant that the public change in attitude — such as it is — comes on the heels of a very formidable wave of struggle by gay people, a veritable “coming out” in a most demonstrative way. Gay Pride took a cue from Black Pride.

Without the launching of the women’s struggle, Freud’s reactionary theory concerning the inferiority of women might still be the prevailing conception. Without the momentous liberation struggles launched in the 1960s, the racist ideology of Oswald Spengler [German author of “The Decline of the West”] and his [U.S.] American disciples would still be taught openly, unabashedly and unashamedly. Without the struggle launched by gay people, the prejudices which have been ground into the consciousness of the masses by indoctrination would not even have been challenged, let alone shaken to their foundations.

An important influence in the progressive movement, insofar as the gay struggle is concerned, dates back to the victory of the [1917] October Revolution in Russia. The Soviet government annulled all laws that restricted the rights of homosexuals. It also annulled all the reactionary laws pertaining to divorce as well as the feudal family relations.

For the first time in history, a workers’ government established equality in law, and to a measurable degree also in fact, between men and women, for heterosexuals and homosexuals. Unfortunately, this period of very progressive development was short lived, and was succeeded by a period of reaction with the rise of Stalin to power.

Our Party, which bases itself on Marxism-Leninism, looks to the early model of the Soviet Union as the embodiment of what our own political position should be in relation to the struggle of gay people.

Our first, most elementary and fundamental duty on this question is to completely eliminate and abolish all forms of persecution and oppression of gay people. We must also fight against all ideological, political and social manifestations of gay oppression that may be reflected in our own ranks.

Ending oppression is really an elementary democratic demand that a bourgeois democracy should be able to grant, along with all other democratic demands. But imperialist democracy tends to restrict the elementary rights of all people — not only gays, women, youth, Brown and Black. It is only the struggle that can wrest concessions.

In the long run, only the abolition of the capitalist system can produce a lasting free and equal treatment of all peoples.