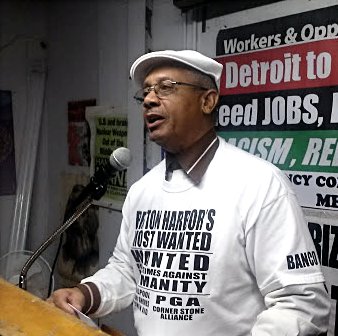 Exactly two years and six months after being locked up, Michigan’s political prisoner, the Rev. Edward Pinkney, walked out from behind the bars. His spouse, Dorothy Pinkney, waited for him at the Brooks Correctional Facility in Muskegon Heights, Mich., on the morning of June 13, ready to drive him to their home in the small town of Benton Harbor in southwest Michigan.

Two nights before his release, Workers World asked Pinkney whether he was “packed and ready to go.” He replied, “I’ve been packed and ready for two-and-a-half years.” Those familiar with the case cannot believe that this 68-year-old African-American community leader could have been charged, tried and convicted on no evidence.

Pinkney faced a white judge, a white prosecutor and an all-white jury on frame-up charges of having altered some dates on a recall petition against Benton Harbor’s then-mayor, James Hightower. There were no confession, no forensic evidence and no witnesses against him.

All activists are threatened by his conviction, which was upheld last year by the Michigan Court of Appeals. That court ruled that Rev. Pinkney had the greatest animosity to the mayor and therefore could be assumed to have committed the crime. The case is now headed for the Michigan Supreme Court. Even if that court were to exonerate Rev. Pinkney, they cannot give him back the hard 30 months he has already served.

Detroit area supporters are holding a “Welcome Home Rev. Pinkney” dinner on Saturday, July 8, at which Rev. Pinkney will speak. It will be at the St. Matthew – St. Joseph Church, 8850 Woodward Ave., Detroit, and will run from 2 to 5 p.m.

A “Welcome Home” fund has been established to help the Pinkneys get back on their feet. On line, you can go to YouCaring.com, search for “Fund for Rev. Pinkney” and click on that to make your donation. Or send a check to Moratorium Now Coalition (memo – Rev. Pinkney), 5920 Second Ave., Detroit, MI 48202.