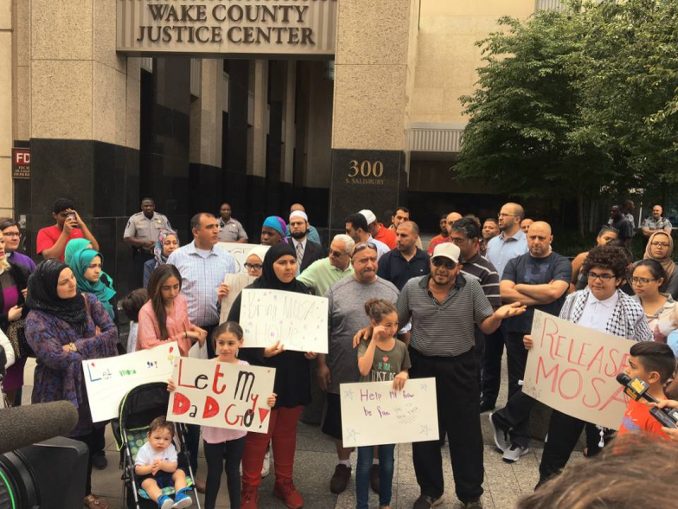 Mosa Hamadeesa is a stateless worker, originally from Palestine’s West Bank.  He was arrested by Immigration and Customs Enforcement on June 1 while at his home in Raleigh, N.C. He has resided there for 10 years without incident. Now Hamadeesa is being held in federal detention.

Currently, Hamadeesa has an asylum case pending. This father of four children is the sole income earner for his family. His 9-year-old daughter, Nadine, has a rare form of cancer and is being treated at Duke University Hospital. Hamadeesa is an auto mechanic and serves the community through his hard work.

ICE has filled out paperwork and plans to deport Hamadeesa back to Israel, where he has no authority to live or travel, and could likely be arrested or even killed. He has not committed any crimes inside the U.S. This case represents the Trump regime’s further escalation of anti-Muslim, anti-immigrant, racist attacks and increasing deportation orders.

Hamadeesa’s family, friends and allies held a press conference and rally on June 7 in front of the Wake County Justice Center in downtown Raleigh. There, they demanded that ICE release him. The rally was organized by Muslims for Social Justice. Also participating were members of the Triangle People’s Assembly, the Movement to End Racism and Islamophobia, the Southeast Immigrant Rights Network, the Muslim America Public Affairs Committee, the Muslim American Society-Raleigh, Workers World Party and other organizations.