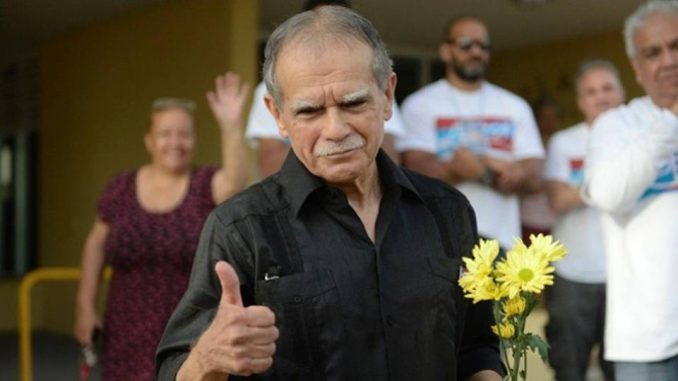 Members of the Boricua [Puerto Rican] Diaspora and many supporters of the cause of Puerto Rican liberation are celebrating the presence of former political prisoner Oscar López Rivera in New York City.

The board of directors of the Puerto Rican National Parade of New York had chosen to honor López Rivera. As they explained on their webpage nprdpinc.org: “The decision to integrate López Rivera in the parade was taken to honor the commitment and hard work of thousands of people — Puerto Ricans or not — whose efforts contributed to the commutation of his sentence. At the same time, we seek to make known the history of Oscar López Rivera, the serious colonial situation in Puerto Rico and the questions of identity that continue to arise, even today.”

However, corporate and pro-colonialist voices quickly began to threaten the board’s decision. Corporations, including AT&T, Coca-Cola, the Yankees baseball team, JetBlue, Univision and Goya Foods withdrew their backing. Right-wing political groups and individuals like New York Gov. Andrew M. Cuomo, organizations of police and firefighters said they would not march in the parade. Right-wing Puerto Rican politicians in both the U.S. and Puerto Rico also added their voices to this complaint, including the current governor of Puerto Rico, Ricardo Roselló, who — incongruously — had asked for the release of López Rivera last year.

To put a stop to the growing divide between Puerto Ricans, López Rivera wrote to the parade’s board rejecting his nomination: “Instead of being honored, I am transferring that honor, as I indicated in a June 1 publication, to our Pioneers who came to the United States and opened doors. … As I also stated in the published editorial, I will march in the parade as a humble Puerto Rican and grandfather, who at 74, after serving 35 years in prison, remains committed to help to raise awareness about the crisis in Puerto Rico.” (telemundopr.com, June 2)

The star presence of this Puerto Rican hero in the parade has highlighted what is really happening in the Puerto Rican nation: the struggle for the very survival of Puerto Rican identity that is confronting the immense assault of imperialist capitalism, represented more forcefully in Puerto Rico by U.S. annexationist forces. What has always existed in Puerto Rico since the Yankee invasion in 1898 is again developing: the confrontation between imperialism and independence.

Now that the Puerto Rican people are confronting the murderous onslaught of a fiscal control board — this junta is the true PR government — which represents U.S. capitalist interests imposed by the U.S. Congress itself, attempts are made once again to muzzle those calling for liberation.

It was born out of the effort to overcome the racism and xenophobia experienced by the first Puerto Ricans who had to emigrate to New York City in the 1950s. It was to bring a sense of community and Boricua solidarity within the coldness of the city of New York.

But also, author Nelson Denis reminds us in his article, “The Deep Secret of the Puerto Rican Day Parade,” (waragainstallpuertoricans.com), that its origin came only one year after the criminal Law 53 or Gag Law was repealed in PR. Under this law, ten years of prison were imposed on those who carried a PR flag or sang the national anthem, or whoever said a single word against the U.S. tyranny. For nine years the Boricua people lived under this gag, which meant the arrest of thousands. According to the article, 3,000 people were arrested in a single week, including 8-year-olds.

The presence of thousands of Puerto Rican flags in the parade and — by extension — the deep love every Puerto Rican has for that flag, consciously or unconsciously, can be traced back to this prohibition.

Today, most Puerto Rican people reside in the United States as a result of the largest migratory wave in Puerto Rican history, itself caused by the lack of jobs and resources in the archipelago. Now, when the presence of Oscar López represents that desire for unity while seeking a real solution to the immense social, political and economic crisis of the Puerto Rican archipelago, a solution that could only be for the benefit of the people under independence as the only formula leading to true sovereignty, the intention of imperialism is to muzzle the voices of liberation.

Joubert-Ceci is editor of the Mundo Obrero page of the weekly Workers World-MO, and a member of the Philadelphia/Camden Boricua Committee.