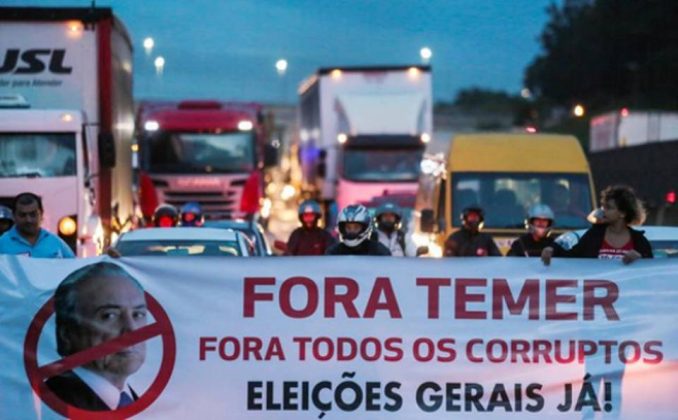 Protesters block highway during strike. The banner reads: ‘Out, Temer. Out, all corrupt. Elections now.’

May 29 — In one of the largest demonstrations in decades in Brazil’s capital of Brasilia, some 150,000 workers, farmers, youth and members of social organizations protested on May 24 the attack on Brazil’s social security programs and laws protecting workers. They demanded that unelected president Michel Temer get out, and his ouster be followed by direct elections for that office.

The mass response to ruling-class attacks continues to grow in Brazil. The ruling-class parties are all involved in a corruption scandal, and the economy is in free-fall. The possibility that this struggle will go far beyond replacing an individual — Temer — is a reality.

The May 24 protest was immediately met by an attack from police, who injured 49 people and killed one, using rubber bullets, tear and pepper gas, and clubs. People fought back, occupying some government buildings.

Temer took the drastic step of ordering 1,500 army and navy troops into the streets. Memories of Brazil’s 1964-1985 military dictatorship aroused more resistance. The congressional opposition, even from his own party, forced Temer to withdraw the troops within hours.

According to the May 26-30 issue of the newspaper Hora do Povo, the march was organized by the central unions and federations: “Metal workers, chemists, domestic workers, teachers, nurses, construction workers, security and service workers, students, women’s movements and party leaders came in caravans from all the states to Brasília to say in a loud and clear tone: ‘No’ to government attacks on welfare programs and labor rights.”

The Brasilia protest was a follow-up to the very successful April 28 general strike involving some 35 million to 40 million workers. The strike called for defense of public welfare programs and of the CLT — the collection of laws that protect workers’ rights — and the ouster of the Temer government.

A public meeting on May 28 led by musicians and other artists gathered 100,000 people in Rio de Janeiro and ended with people shouting what have become the unifying demands of the left and workers’ movements: “Temer out!” and “Direct elections now!” (Vermelho, May 28) The demand for direct elections is for the president to be elected by the people instead of by the Congress.

Temer, never a popular politician, has hit a new low. According to the May 27 New York Times, polls show that 88 percent of the people want him out; other polls show only 5 percent support him. Brazil’s economy shrank by nearly 8 percent in the last two years, and unemployment stands at 14 percent. (Al-Jazeera, May 28)

Even sectors of the ruling class that had earlier backed Temer are beginning to desert him. They seek to replace him with someone who would defuse the growing popular revolt, while leaving a regime in place that continues his anti-poor, pro-imperialist austerity program.

According to the May 5 Workers World: “The austerity measures include extension of the working day and the working week, reduction of the required lunch break time, raising the minimum retirement age to 65, pension reductions, lower pay for outsourced workers and lowering the restrictions on outsourcing, and no longer requiring bosses to extend benefits to workers hired for 240 days or less. These policies aim to further destabilize the precarious and low-wage workforce of Brazil. The workers, with good reason, are outraged.”

The biggest of the powerful ruling-class media firms, O Globo, has called Temer “discardable.” But O Globo wants the Congress to name Temer’s successor. This would be an “indirect” election.

Temer claimed on May 26 that he wouldn’t step down, which is no surprise since he faces corruption charges that could land him in jail if he’s no longer president. The longer he clings to the office, however, the longer a mass struggle can develop that unites the workers, landless peasants, farmers, women, youth and all the left political parties.

Temer is president now because last August the Brazilian ruling oligarchy conspired to oust elected President Dilma Rousseff of the Workers Party and replace her with someone who would, without hesitation, cater to the interests of imperialism and Brazil’s super-rich. Their goal was an open attack on Brazilian workers and farmers, with freedom to pillage the natural resources of this vast country whatever the cost to the environment.

Internationally, the parliamentary coup against Rousseff also strengthened U.S. imperialism in Brazil and all Latin America, where Brazil’s role is so important. This maneuver had the blessing of U.S. politicians and Wall Street — as could be seen in the many articles pro-capitalist Forbes magazine published in 2016 attacking Rousseff.

Last year Congress impeached Rousseff, accusing her of corruption based on a technicality. She had made administrative adjustments to the national budget that were standard presidential practice and normally not legal grounds for impeachment. Rousseff had already made concessions to Brazilian capital, but they were insufficient to stop its assault. These concessions, however, did weaken mass support for her and for the Workers Party.

The politician who led the impeachment battle, Eduardo Cunha, has subsequently been convicted of corruption and sentenced to 15 years in prison. A similar fate hangs over Temer.

Former President Luis Ignacio da Silva (Lula) of the Workers Party is still a popular favorite for the regularly scheduled 2018 presidential elections. There is some discussion of arranging an agreement between Lula and another former president, a conservative, to replace Temer.

If the ruling class is unable to arrange a smooth ouster of Temer, and instead mass action throws him out, this will open space for a bigger working-class struggle and victory.